Tradition Compels Us to Respond

Religious communities are confronting the threat of climate change with activism. 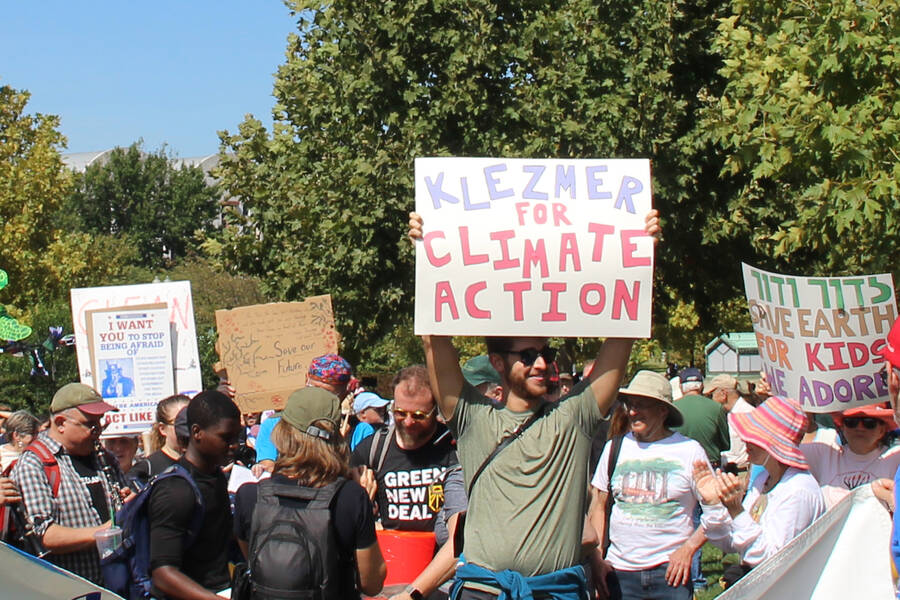 AS WORLD LEADERS gathered at the United Nations this week to lay out their plans to curb climate change, Donald Trump instead spoke about the urgency of protecting religious freedom. “Today I ask all nations to join us in this urgent moral duty,” Trump said on the sidelines of the UN General Assembly. “We ask the governments of the world to honor the eternal right of every person to follow their conscience, live by their faith, and give glory to God.”

But in fact, many religious communities around the world have turned their attention toward the climate crisis.

Leaders and congregants from an array of religious backgrounds joined an estimated 4 million people across the world last week to march in the streets and demand climate action in what was the largest youth-led, grassroots climate demonstration in history.

Religious communities have been wading into the climate fight, arguing that taking action to curb greenhouse gas emissions is a moral obligation and one clearly outlined in most faith-based texts—from the Hebrew Bible to the Quran to the Unitarian Universalist Principles and Purposes. Climate change presents a spiritual conundrum, confronting people alive today with the prospect of an “apocalypse” within our own lifetime and forcing a radical rethinking of our ethical commitments.

“It is our God-given responsibility, our religious obligation, to care for the Earth and every living thing,” said Sevim Kalyoncu, executive director of Green Muslims, an organization that connects Muslims to environmental activism.

In Washington, all three of the major Abrahamic faiths along with many others were represented among the throngs of people who marched to the US Capitol holding an array of handmade signs and chanting “shame on you” and “we shall overcome.”

A group of musicians wearing Green New Deal shirts played klezmer music, while a few yards away, a family held a sign that read, “Green Muslims” in large green lettering. Still another group held a “Christians for Climate Justice” banner.

Demonstrators acted to build momentum before this week’s much-anticipated climate summit in New York. Rachel Kyte, UN Special Representative and CEO of Sustainable Energy for All, said on a press call last week that a climate emergency has already been declared. “This is about an appropriate response to that emergency,” she added.

But despite the global outcry, world leaders made only incremental promises. Sixty-five countries pledged to achieve net-zero emissions by 2050. And a number of businesses said they would hit targets outlined in the Paris climate agreement. China and the United States, two of the world’s largest polluters, made no new promises. Trump did not attend the climate proceedings.

UN Secretary General António Guterres had called on world leaders to bring actionable plans, not just speeches, to the table—including a stop to all coal-fired power plants, a decrease in fossil fuel subsidies, and a pledge to reach net zero emissions by 2050.

Alexandria Villaseñor, a 14-year-old climate activist who founded Earth Uprising, a youth-led climate activist group, sees “stewardship” as an important message religious communities are well-positioned to spread. “What we can learn from them is how to be good stewards,” she said. “With the climate strikes and direct actions, everyone is needed.”

Nana Firman, the Muslim outreach director for Green Faith, an interfaith environmental group, said it was after the 2004 tsunami in her native Indonesia that she started to understand how Islamic teachings can mobilize people around environmental stewardship.

With a background in industrial and urban design, Firman was employed by the World Wildlife Fund to help Indonesian communities impacted by the tsunami to restore the coastline. She said she understood how vital it was to replenish the greenery of the coast, but was struggling to communicate the gravity of the task to those who had lost their homes and were understandably more concerned with rebuilding them.

“I used a lot of jargon like ‘conservation’ and ‘biodiversity,’” she said. “And they said, give us our homes, our lives were just shattered.” A friend recommended that Firman try to engage the community from a place of shared Muslim faith. “Though I was raised as a Muslim, I never put that together,” Firman said. “I said, let me look at it. I went through the scripture, the holy Quran and the prophetic tradition, and I found more than 700 versus related to nature.” The community in Indonesia was familiar with these passages and began to see the connection, Firman said.

Religious institutions around the globe have been sounding the alarm. The Parliament of the World’s Religions is urging commitments for climate action. Pope Francis has called for “drastic measures” and “prophetic actions” to reach net zero greenhouse gas emissions. The largest Muslim organization in the United States, the Islamic society of North America, announced in 2017 that it would divest from fossil fuels. And while Judaism is a decentralized religion with no formal rule-setting body, individual groups are taking steps. The Jewish sustainability organization Hazon recently underwent a strategic planning process to reorient itself toward direct climate mitigation.

“We together and unanimously said this is a global climate crisis and Jewish tradition compels us to respond,” said Nigel Savage, Hazon’s founder and president.

Hazon aims to start a conversation with Jewish communities not only to have a kashrut policy in the traditional sense, but also to have a food policy that expands the definition of “kosher” to account for climate change. “Not many people understand that industrial meat, industrial dairy and industrial food waste are collectively one of the top two drivers of climate change,” he added.

Rev. Michael Malcom, the Environmental Justice representative of the Southeast Conference for the United Church of Christ, said he was glad young activists, unlike previous generations of environmentalists, understand that land and people are inseparable. “To care for creation, that’s not just the planet, that’s the people,” said Malcom. He added that he felt the effects of environmental degradation growing up in Atlanta: “We lived it but we didn’t talk about it.”

“When we have extractive relationships, whether it be with people or the planet, it dictates our relationship with God,” he explained. “Having a relationship that is extractive, that is one-way, it is sin, because it only leads to destruction.”

Leading up to Friday’s climate strike, over 60 religious congregations in the DC area dedicated their worship services to climate action. The fifth annual “Climate in the Pulpits” campaign, organized by Interfaith Power and Light of DC, Maryland, and Northern Virginia, reached over 4,000 people in their houses of prayer.

Joelle Novey, Director of Interfaith Power and Light for the DC area, is deeply involved in a number of independent minyanim in the local Jewish community. Once she understood the climate crisis, she said, it was hard to think about anything else. “I’ve become a big believer in talking about climate in our religious communities; it’s a challenge to our spiritual selves.”

Because religious groups already gather, Novey said, they are well-positioned to take actions beyond marches as an organized collective. The Sunday before the strike, a group of Unitarian participants gathered in the All Souls Church Unitarian, where they spoke about the framework of a “just transition”—a blueprint for equitably moving from an extraction economy to a renewable one. On Tuesday, the group migrated to the Capitol to lobby congressional staff on the Green New Deal and other climate provisions.

Lavona Grow, Chair of the Advocacy Oversight Committee for the Unitarian Universalists for Social Justice, briefed the group on best practices for speaking with staffers before sending them on their way. “We are different, being a faith-based group,” she said. “A value we have is being relational.”

Kit Marlowe and his wife B.J. were among a small group headed to speak with staffers in Republican Senator Joni Ernst’s office. (Ernst serves on an Environment and Public Works subcommittee.) Marlowe explained that he and his wife live in a very environmentally sensitive area near the ocean in Cape May, New Jersey. “It could be that we're unable to stay there more than 50 years,” he said. “And my intention is to live at least 50 more years.”

Arianna Skibell is a journalist based in Durham, NC. She currently writes about climate change for Politico.

Report
Questioning the Covenant
Christian Zionism is at the height of its powers, but evangelical critics of Israel are finding their voice.
Arianna Skibell
Dispatch
How Far Is J Street Willing to Go?
Its annual conference has become a space for left-wing criticism of Israel, but the organization remains cautious.
Arianna Skibell
Sign up for our email newsletter, featuring exclusive original content