“They Want To Kick Us Out of This Land” 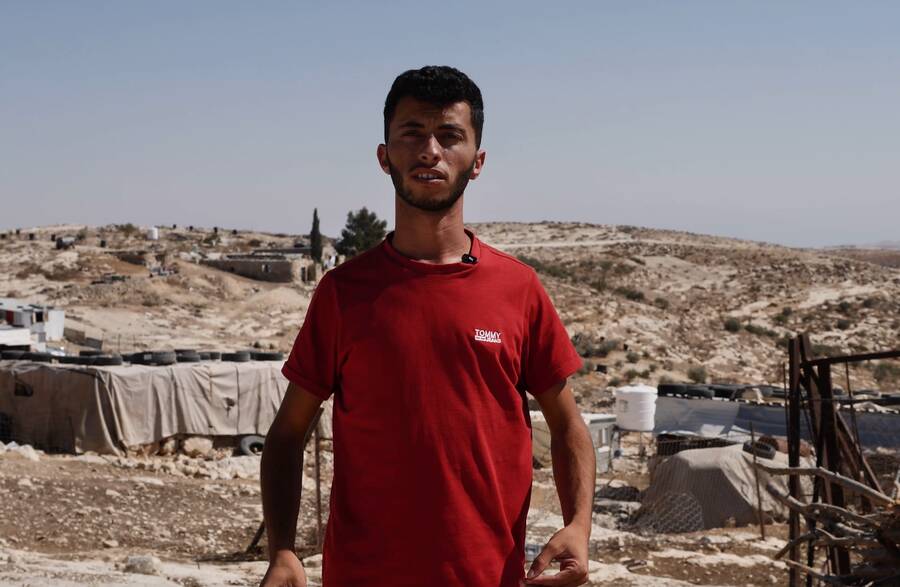 On September 28th, the Jewish holiday of Simchat Torah, a mob of Israeli settlers in the West Bank descended on the Palestinian village of Mufagara in the South Hebron Hills with masks and guns, destroying property and assaulting residents as Israeli soldiers stood by. One threw a stone that hit three-year-old Muhammad Hamamdah, causing a skull fracture. Mufagara is part of a cluster of villages known as Masafer Yatta in Area C in the occupied West Bank, which is ruled by Israel’s civil administration and is a major site of Israeli settlement. Because Israeli authorities rarely grant Palestinian villages building permits in the area, most structures are built illegally and unable to connect to local water and electricity networks. A settler assault on villages in Masafer Yatta is not unusual: Such attacks have occurred regularly in the past year. Local residents and activists consider them to be part of a larger government-supported campaign—featuring building restrictions, demolitions, and other punitive policies—to drive them from their land and make way for Israeli settlement. But the September 28th pogrom, perhaps because of its scale and the injury of a young boy, prompted particular outrage and media scrutiny.

Then, on October 5th, the mainstream Israeli news station Channel 12 aired a story about the September 28th attack that offered a different narrative: They showed a brief video of Basil al-Adraa, a Palestinian journalist and activist from the Masafer Yatta village of al-Tuwani, being approached by Israeli soldiers near Mufagara, and said that al-Adraa was setting fire to Palestinian homes so he could blame it on Jewish settlers. Afterwards, the anchor tweeted the video repeating the claims and using al-Adraa’s name; they did not ask him for comment. Similar claims followed in local settler publications. Al-Adraa’s own footage showed that the claims were false: The fire in question was in fact started by a tear gas bomb thrown by Israeli soldiers. +972 Magazine, where al-Adraa is a contributor, and the human rights organization B’Tselem, where he volunteers, quickly spoke out on his behalf. Channel 12 has yet to apologize or retract the story. In a piece for +972, al-Adraa wrote that he believes the segment was an attempt to intimidate him out of documenting the violence of the occupation.

For this week’s newsletter (to which you can subscribe here), I spoke to al-Adraa about the context of the Mufagara pogrom, why he became a local journalist, and the experience of being smeared by a major Israeli news source. Our conversation has been edited for length and clarity.

Mari Cohen: Why did you start documenting settler violence in the West Bank?

Basil al-Adraa: I’m from the al-Tuwani village in the South Hebron Hills in the occupied West Bank. My parents are activists in the area fighting for justice for our community in Masafer Yatta. So I grew up going to peaceful demonstrations against settler violence, against home demolitions, against the wall that they established in front of my village in 2006. Being part of that process, and seeing some of the small successes we won through resistance, inspired me to continue to document the violations. I’ve been documenting the reality around me all my life; I learned English to tell the stories of Masafer Yatta. Today, I am a full-time activist here in my community and other places where it’s needed.

MC: Recently, what kind of settler actions have you been documenting?

BA: Settlers have long been attacking the communities here. The [Israeli] Civil Administration gives them land stolen from the Palestinians: They declared it state land so they can take it by force, for settlers to build settlements and outposts and farms. This year, the settlers have started these new sheep farms around the West Bank, where they bring volunteers to work on these farms. But the settlers aren’t content with the tens of thousands of dunams [one dunam equals 1,000 square meters] they’ve been granted: They bring their animals to our private fields, which the state can’t take from us. They bring them to our orange trees, to drink from our water systems—like the well where we collect rainwater—and to graze on our grass.

And what’s been happening recently, especially since May, is they’ve been organizing big attacks on Shabbat and holidays because settlers don’t have much work to do on those days. Dozens of settlers will come masked, with hammers, machine guns, sticks, and stones. The army escorts them two or three kilometers from their settlements to our villages. They burn houses, cut down olive trees. If the army sees some Palestinian trying to defend themselves, then they will shoot at [that Palestinian] with live stun grenades, or tear gas, or rubber bullets. They use all the force. We are under army law as Palestinians in Area C, but the settlers are under civilian law, so the soldiers in the area can’t deal with the settlers, who are under the jurisdiction of the police. But the police take three or four hours to come, only after the attacks have finished.

In my community, al-Tuwani, there have been at least seven organized attacks. A lot of people look at these as [isolated] incidents, and this time, there was more media attention to the issue because there was a three-year-old child who was wounded. But it’s part of a policy, in which settlers and the Israeli army don’t want us to feel safe where we live. Like the home demolitions, the blocking of roads, the cutting water and electricity networks, it’s all leading to one goal: They want to kick us out of this land, out of Area C toward Area A [areas under Palestinian administrative and police control, like Ramallah]. But our land is here, our life is here.

MC: What did you witness on September 28th in Mufagara?

BA: It was unbelievable. This was really a pogrom, the biggest attack I’ve ever seen in my life. The settlers reached all the houses in this community, destroying windows, water tanks, cars, tractors, solar panels. Eleven people were injured, including this three-year-old child who was taken to the hospital. I was documenting for a few minutes, when the settlers started chasing us to take our cameras. There were like 20 settlers running after me and my friend. We barely succeeded in running away from them.

MC: What happened in the interaction with the Israeli soldiers that was later used against you?

BA: That was later, the moment I reached Mufagara after the settlers had already left. The fire was the first thing I saw in the village. The families are collecting wood for the winter, and a tear gas bomb had fallen there and was burning the wood, starting a fire. This is not the first time that the army has thrown tear gas toward the houses; many times it starts a fire in the olive trees or in the grass when it falls. It was a small fire in the beginning. I had the camera and I didn’t have anything to put out the fire. So there were two soldiers passing me and I told them, “You did this, you have to turn [the fire] off.” They ignored me and walked on. I shouted at the nearby families to get a water bucket. Only once two guys were running toward the fire with water buckets did the soldiers come back to help put out the fire. But one officer was telling me, “You did this.” I told him, “No, you made this fire, it’s from a tear gas bomb, I found it. Why would I want to make a fire?” It was a very stupid moment.

Then, one week later, Channel 12, Israel’s mainstream media, said that I personally built this fire to claim the Israelis were burning it. They used a 12-second video of a soldier telling me I started a fire as evidence. To me, this is a story they created because the army and settlers have been looking bad in the media after this big attack. So they just create their own story. Since I’m an activist documenting the truth, they take me as their enemy and they want me to pay a price. Meanwhile, we have so much evidence of settlers burning, attacking, destroying, shooting, and the police don’t detain them.

MC: What was your immediate response when you saw Channel 12 was framing you?

BA: It’s immoral. It’s immoral for them not to ask me [for a response] if they are publishing my name and that I am activist and volunteer at B’Tselem. I was worried because this was done by the occupation forces, by the army, and they have power to hurt me. So I was really scared of what might happen. But a lot of friends and I made posts about the truth of what happened, and so did B’Tselem, +972, and many others.

MC: Have there been consequences of having this published about you?

BA: Settlers have been sending me threats on Twitter, and I get threats in the field from settlers here. But it’s the price of the activism, the price of what I’m doing. This is what the occupation looks like.