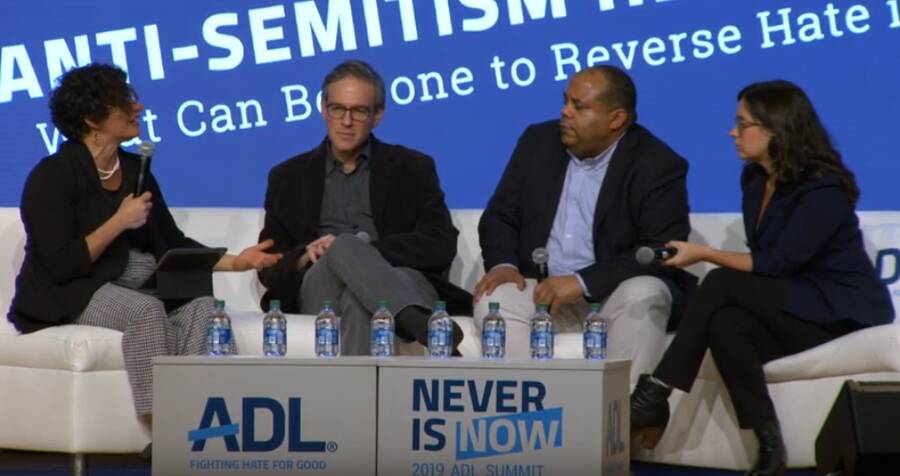 THE ANTI-DEFAMATION LEAGUE hosted its Never Is Now Annual Summit on Anti-Semitism and Hate last week in Manhattan, featuring dozens of panelists and keynote speaker Sacha Baron Cohen. While the daylong event was ostensibly convened to focus on “understanding contemporary drivers and dynamics of anti-Semitism,” a closer look at its programming reveals a more troubling agenda.

In the age of Trump, the ADL has sought to reposition itself as a bulwark against rising racism and xenophobia, moving away from the legacy of its longtime former CEO—the melodramatic, vituperative, Islamophobic Abe Foxman. Under the leadership of its current CEO Jonathan Greenblatt, a mild-mannered former Obama administration staffer, the ADL claims to have redoubled its focus on combating “hate”—the amorphous, apolitical term it uses to describe everything from neo-Nazism to anti-Zionism—and defending the establishment liberal consensus against extremism on both the left and the right.

Greenblatt’s ADL, however, has found common cause with the Trump administration—one of the drivers of the racist, xenophobic, and antisemitic violence it aims to combat—on matters related to Israel. The ADL’s position that Israeli settlements in the occupied West Bank are not a significant obstacle to peace and that, contrary to the international consensus on their illegality, their status should ultimately be determined in bilateral negotiations mirrors the position articulated by Secretary of State Mike Pompeo in his announcement last week that the United States will no longer consider settlements a violation of international law. (The ADL joined the effort last year to force Airbnb to reverse its decision to delist rentals in Israeli settlements in the occupied West Bank.) As Josh Nathan-Kazis has reported, the group is also “vigorously supporting” anti-BDS legislation on both the federal and state levels—legislation that the ACLU has called unconstitutional.

These policy positions—quashing free speech and shielding Israel from criticism or consequences for violating international law—seemingly run counter to the organization’s stated value of having the courage to speak out against injustice. The ADL’s conference showcased such contradictions with brutal clarity.

In his opening speech, Greenblatt—who has affirmed the group’s opposition to boycotts that would pressure the Israeli government to end its decades-long military rule in the West Bank—quoted Martin Luther King Jr., who famously advocated boycotts as a form of nonviolent resistance to Jim Crow.

A laughable panel, titled “What Can Be Done To Reverse Hate in America,” featured New York Times columnist Bret Stephens, known for his hateful screeds about “the disease of the Arab mind,” and his colleague Bari Weiss, whose recent book How to Fight Anti-Semitism posits a false equivalence between right-wing white nationalist violence and left-wing criticism of Israel. The panel was moderated by Jodi Rudoren, the Times’s former Jerusalem bureau chief and the new editor-in-chief of the Forward, where she has pledged to support “civil discourse,” yet stands behind an editor’s demonstrably inaccurate accusations of antisemitism at a recent campus protest.

The narrowmindedness and parochialism of the New York Times editorial line, with its reflexive sympathy for Israel and overt contempt for the left, was on full display. Weiss compared anti-Zionist Jews to Stephen Miller, the ferociously anti-immigrant Trump administration official with proven white nationalist ties, saying both are “involved in movements that put the target on the backs of other Jews.” Stephens, unsurprisingly, had no concrete advice for how to reverse hate other than that pro-Israel student activists should quote a Cee Lo Green song from 2010 and tell their BDS-supporting peers “F U.”

Eric Ward, the executive director of the Western States Center, a racial and economic justice organization, was the only speaker to bring up Islamophobia on a panel about how to address hate in the US, where anti-Arab and anti-Muslim attacks have spiked since Trump’s election and the administration’s implementation of a ban on immigrants from Muslim-majority countries. Weiss and Stephens, meanwhile, have made careers out of attacking Arab and Muslim activists and intellectuals.

Though Foxman retired more than three years ago, his legacy was still felt at the conference. The ADL’s former CEO was an outspoken defender of the US government’s widespread spying on American Muslim communities after 9/11 and, in addition to a host of other unsavory positions, opposed the construction of a mosque two blocks north of Ground Zero, a target of much right-wing anti-Muslim activism in the 2010s. Among the listed speakers during one of the breakout sessions this year was Mitchell Silber, a former senior analyst with the NYPD division that surveilled mosques, infiltrated Muslim student groups, and monitored conversations—part of a spying program that reportedly generated not a single lead or terrorism investigation.

Other speakers during the conference’s opening session included Isaac Herzog, chairman of the Jewish Agency—a Zionist, para-state institution that operates internationally in conjunction with the Israeli government—and Elan Carr, a former California prosecutor and failed Republican politician who is now the Trump administration’s Special Envoy to Monitor and Combat Anti-Semitism. Herzog praised British Prime Minister Boris Johnson for his commitment to fighting antisemitism; he made no mention of Johnson’s long record of sexist, racist, and homophobic remarks, which include referring to gay men as “tank-topped bum boys” and Muslim women who wear religious head-coverings as “letterboxes.” Carr, once “Supreme Master” of the AEPi fraternity, shouted out a fellow frat brother in attendance before launching into a speech about the dangers of “militant Islam” and the importance of Jewish unity—“in one voice and with one beating heart”—in fighting antisemitism.

Carr’s appearance also highlighted the convergence of the ADL’s political goals and those of the Trump administration. Following the State Department’s announcement regarding Israeli settlements, Carr tweeted his approval, thanking the Trump administration for its “continued commitment to ensuring that the #Jewish people and the State of #Israel are treated fairly.” By scheduling Carr in such a prominent speaking time, during the conference’s opening plenary, the ADL gave its imprimatur to his conflation of the Jewish people with Israel.

Furthermore, in designating as antisemitic the modest demand—held by both US political parties until recently—that Israel cease building settlements in the occupied West Bank, Carr and the ADL are implying that there is something essentially Jewish about the occupation, and that to oppose the occupation through nonviolent means is to act against the Jewish people. The radical, and ultimately antisemitic, implication endorsed by Carr and the ADL is that Judaism is intrinsically about territorial-maximalist expansion and military domination—that the occupation is inseparable from Judaism. It is precisely this conflation that Jewish anti-occupation activists have worked to challenge for years, contrary to the claims of antisemites and right-wing Zionists alike.

The canard that there is no difference between anti-Zionism and antisemitism was a constant refrain throughout the day. “Anti-Zionism, make no mistake, is just a PC way of describing antisemitism,” Greenblatt asserted. “My view is that anti-Zionism is the modern face of most antisemitism,” Stephens echoed. Carr referred to “the far left” as “the antisemites who dress their hatred in the fig leaf of anti-Zionism.” Via recorded message, Rabbi Lord Jonathan Sacks, former Chief Rabbi of the United Kingdom, declared that “the most powerful modern strand of antisemitism is anti-Zionism.”

Of course, such declamations elide the long history of Jewish anti-Zionism and its vibrant present, a lived politics for Jews in ultra-orthodox communities as well as secular, progressive ones.

Still, this adamant conflation of anti-Zionism with antisemitism serves a clear political function. The ADL, like AIPAC and other pro-Israel organizations, is adjusting to the eclipse of the two-state paradigm (though, like AIPAC, it still nominally supports a two-state solution). As Israel increasingly signals that it will formally annex the West Bank, these groups have adopted a concerted strategy to render unacceptable and illegitimate the idea that Israel should grant equal rights to all of the people living under its control. Ironically, these right-wing Zionists are in agreement with anti-Zionists that a Jewish state is incompatible with the values of democracy and equality—they have simply chosen a Jewish state above all else.

The ADL is, and has long been, a right-wing Israel advocacy organization, guided firstly by the question, “Is it good for the Jews?” at the expense of a vision of justice for all. Though it defines itself as a civil rights organization, it is committed to a political arrangement that systematically denies the basic human rights of millions of Palestinians. It wants to be a force that combats “hate,” yet it consistently amplifies anti-Muslim voices and legitimates anti-Arab and anti-Muslim state policy. It claims to act in the interest of all Jews, yet it yokes the fate of American Jews to a discredited establishment liberalism that draws false equivalences between right- and left-wing antisemitism.

The ADL, however, cannot provide the answers. In the struggles that will define the future of American Jewish life, the organization has chosen the wrong side.

Newsletter
The Nationalist Heresy of Temple Mount Activism
For Israel’s right-wing religious Zionists, ethnonationalism has overwhelmed the commitment to Jewish law.
Joshua Leifer
Newsletter
The Israeli #Resistance Demands a Return to Normal
Domestic backlash to the incoming far-right government ignores its plans to further entrench the occupation.
Joshua Leifer
Sign up for our email newsletter, featuring exclusive original content
Short on time?
Sign up for our weekly Monday roundup of everything you missed in Jewish Currents last week.