“Thinking that I was having a nightmare, I forced my eyes to stay shut. But then, the second bomb came.” 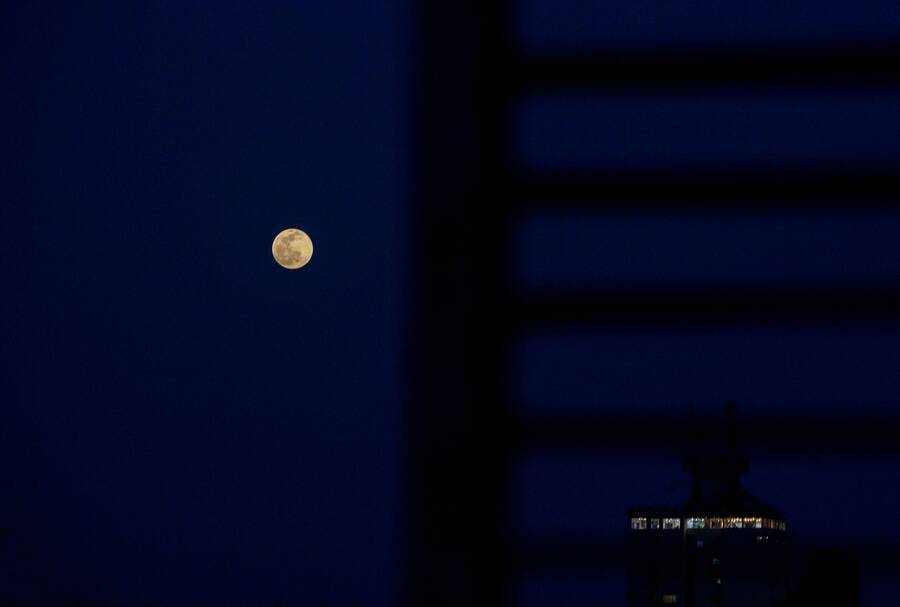 The moon rises over Gaza on April 16th, in the middle of Ramadan.

It’s Ramadan again and everyone is anticipating a war. We always experience wars during the holiest month. Gaza is like a cemetery that is full. Everything is fractured: hopes, bones, breaths. And still, the scythe of death claims more with each passing second. We who survive the oblique mowing, walking upright in this cemetery, aren’t blessed with a proper burial. So we are doomed to drift, suspended between life and death. We—whose struggle has nothing to do with joining NATO and who don’t play the threatening card of nuclear weapons—live here, inside a perpetual state of war, waiting for the next bombing campaign.

It is the 21st of April, my first day off work. The holiday has started. I wake dizzy and hungry and later than usual. The first thing that occurs to me is that I didn’t have suhoor, the early morning meal before fasting begins again at daylight. I had told my mom not to wake me to eat if I was still asleep, and now I regret it. I had stayed up late, haunted by the memory of last Ramadan, when the violence that began with the terror attacks against Palestinian worshippers in Al-Aqsa Mosque culminated in the war in Gaza. Is that very scenario going to be replayed again? I wondered last night, scrolling anxiously on my phone. Sleep must have claimed my weary eyes because I was awakened by a startling impact, my heart thumping and clenched. Thinking that I was having a nightmare, I forced my eyes to stay shut. But then, the second bomb came. I opened my eyes. The last thing I recall seeing before I fell asleep again was the bright screen of my phone telling me that it was 1:59 am; I watched it turn to 2:00. Maybe watching that hour turn without a third bomb shaking the room convinced me I would survive, and thus I slept.

Now it is morning. I feel around the blanket in search of my phone. When I find it, its battery is almost dead. It had a tough night, too. I rise and roam around the house unseen. My mom is giggling on the phone with one of my aunts. My sister Nour is frantically tapping on her keyboard. She must be anxious; her exam is due in two hours. I see the pajamas of my two youngest sisters sprawled on the floor. The space where their backpacks usually rest is empty. They must already be at school. In any other part of the world, two bombs exploding nearby would turn everything upside down. But in Gaza, two lone bombs do not interrupt our lives. Everything feels normal.

Returning to my room, I tie up my hair and situate myself in front of my laptop. I have 15 new WhatsApp messages—eight from group chats, seven from my friend Samia, who sent me a link to an internship. I begin to fill in the required fields with my personal information. When I come to a question about my nationality, I skim the options looking for Palestinian, but it isn’t there.

Two days earlier, while gathering after our family iftar—to sit, chat, and have some dessert together before Taraweeh prayer—my nine-year-old sister Sara was FaceTiming with her friends from school when their teacher posted an assignment to their Facebook group, a multiplication game to practice what they had learned. The game, hosted on an American website, required that players sign up by entering some basic information about themselves, including their country of origin. Sara scrolled down the list of countries five times. She failed to find what she was looking for. Frustrated, she handed the phone to our mom and said, “Mama, I can’t find Palestine here. Find it for me quickly before my friends play and win.” A look of helplessness came over all of our faces. We all knew what was going on: Palestine has been obliterated from this world. Israel has taken its place. Sara’s eyes were shining furiously. Our mom hesitated for a moment. Then she lightly placed her hand on the screen and scrolled down until she arrived at the sole destination that would enable her small daughter to compete with her peers. What would a mother not do for her child? She pressed on Israel and released the phone into Sara’s tiny hands.

I can’t do the same, however. I know too much. I can’t satisfy my desire to enroll in an internship at the cost of obliterating my identity. I close the tab.

It’s not just the bombs. The entire world has tried to obliterate us, to deny who we are and where we come from—our very right to exist. At night I am afraid of being blown up, and by day I am told that the place where I live has already been taken off the map. But we are still fighting for our deeply rooted lives. We struggle. We know our history and we live it. Neither Israel nor the world will ever erase us. Because I am writing. Because we are writing. Because we are not going to stop saying who we are.

Kholoud Balata is a 22-year-old lecturer, poet, and writer. She was born in Gaza, Palestine, where she lives.

Dispatch
A Butterfly in Gaza
“It was just a week ago that I saw Gazan children practicing childhood the way they are supposed to, but that must have been deemed too good for them.”
Kholoud Balata
Sign up for our email newsletter, featuring exclusive original content
Short on time?
Sign up for our weekly Monday roundup of everything you missed in Jewish Currents last week.