Portrait of a Movement

A photographer attempts to capture the face of contemporary socialism. 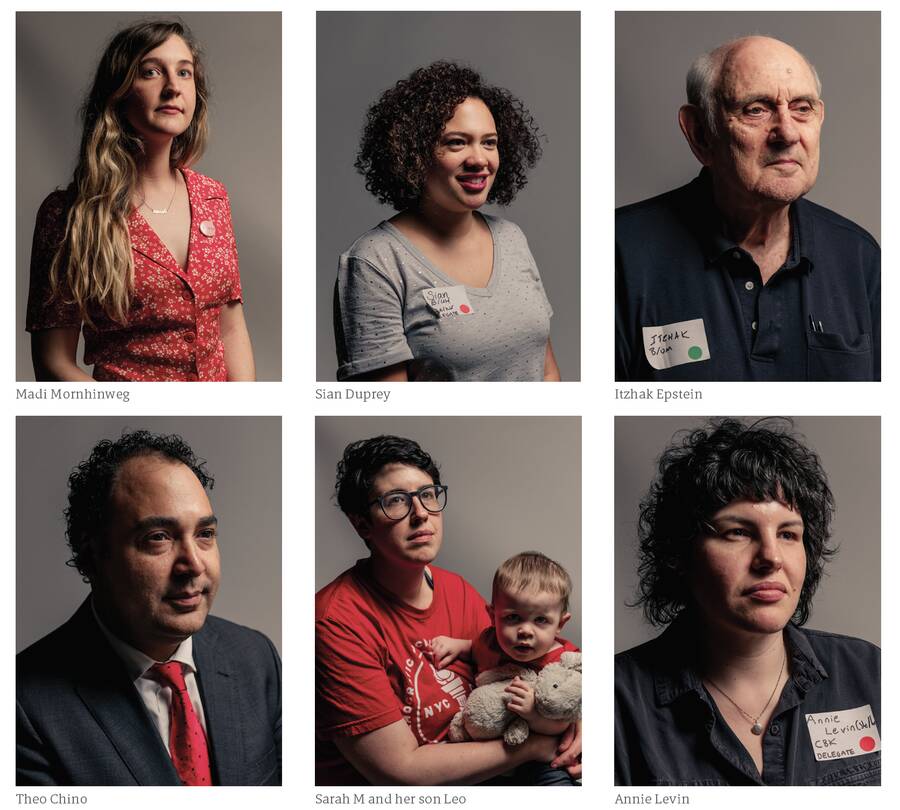 IN JUNE 2018, I found myself photographing one of the most stirring moments in recent socialist history: the surprise primary win of Alexandria Ocasio-Cortez, a 28-year-old bartender and a member of the Democratic Socialists of America (DSA). The victory sealed her path to Washington, and images of her own shocked joy in a packed Bronx pool hall became synonymous with socialism’s rise. At that point, I had been photographing the DSA for over a year, asking the question: What does socialist organizing in America really look like?

By the time I filed those now-iconic photos, I was already beginning to realize that this question was perhaps best answered through the documentation of quieter moments: members fixing brake lights for free in a muggy New Orleans parking lot; delegates immersed in tense policy debates at the DSA national convention; young organizers at home just outside of Boston, relaxing among friends.

The DSA has come to stand in for the modern surge of leftism in the United States, and for good reason: It has grown to 56,000 members and has succeeded in electing 96 legislators nationwide. Outside of their electoral work, democratic socialists have joined other activist groups to push for causes from rent control to abolishing ICE. Several times while photographing DSA actions, members have approached me and asked me to join up—an offer I always politely decline. I’m often impressed with the group’s work, but my job isn’t to make DSA look good—it’s to show it as it is.

It was with this thought in mind that I walked into Manhattan’s Judson Memorial Church this past June with my arms full of camera equipment. It was the day of the New York City DSA’s annual convention, and I’d decided to make portraits of as many members as I could. For two years I’d been photographing socialists in action, trying to capture the practice of organizing. But what would be revealed by asking socialists to sit and look down the lens? What happens when a people-powered movement is reduced to just the people themselves?

I unpacked my gear and asked one of NYC DSA’s media officers to encourage anyone up for a picture to come say hello. Soon a line of people formed. I’d been nervous I’d have to beg people to pose and instead, I was overwhelmed. The group of subjects was self-selected—an imperfect methodology, but more organic than if I’d chosen them myself. As I photographed, I thought about the organization’s perceived lack of diversity and persistent representation gap. Would portraits of the DSA’s highest-profile chapter confirm suspicions that socialism is a movement of the young, well-educated, white male?

The story told in these photos is incomplete, but hopefully revealing. More than half of the members that volunteered to sit for a portrait were women, and over one third were nonwhite. Many were over the age of 50, and several spoke to their experience of learning socialism not in a lecture hall but on a shop floor, in a break room, or at a union meeting. Members told me about what motivates them to devote their free time and energy to democratic socialism, and what the media (me included) often gets wrong about their comrades.

This collective portrait presents a small window into the people who make up the socialist surge in today’s America—who they are, and what they want. They capture a DSA that is thinking through issues of diversity and identity with far more nuance than outside observers usually give them credit for—and with plenty of lessons to offer those struggling to make sense of the current moment.