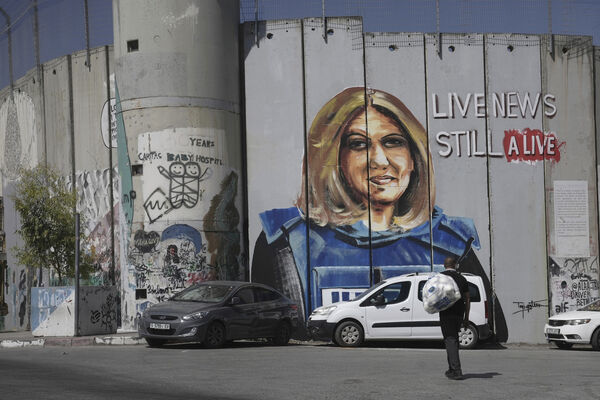 On July 4th, the State Department released a statement concluding that Israeli soldiers were “likely” to blame for the killing of Palestinian American journalist Shireen Abu Akleh, who was shot to death on May 11th while covering an Israeli military raid in the West Bank city of Jenin. But the statement also described the killing as “unintentional” and the result of “tragic circumstances.”

The pronouncement satisfied nobody. Israeli officials were upset that the United States blamed them for the shooting. (Investigations by CNN, The New York Times, and The Washington Post also concluded that Israeli troops killed Abu Akleh.) Palestinian officials and human rights advocates were angry that the State Department cast the killing as unintentional. The State Department’s conclusion seemed intended, as Palestinian American analyst Yousef Munayyer told Jewish Currents last week, as an attempt to “move on” from an issue that had the potential to dog President Joe Biden as he travels to Israel/Palestine later this week.

But the family of Abu Akleh, who was an Al Jazeera reporter and one of the most famous journalists in the Arab world, is doing its best to keep the killing in the spotlight. The family was enraged at the Biden administration’s statement, and has vowed to press their demand for the US to hold Israel accountable for the killing. In a July 8th letter to Biden, Anton Abu Akleh, Shireen’s brother, wrote on behalf of the family to express its “grief, outrage and sense of betrayal” at the administration’s reaction to her death. He demanded a personal meeting with Biden during the president’s visit to the region, asked for the State Department to retract its July 4th statement, and requested the administration conduct its own investigation.

“Your administration has thoroughly failed to meet the bare minimum expectation held by a grieving family,” the letter reads in part. “Instead, the United States has been skulking toward the erasure of any wrongdoing by Israeli forces.” (Read the letter in full here.)

The Abu Akleh family letter has added to the growing calls for a US-led investigation from members of Congress, human rights groups, and others—increasing the pressure on the Biden administration to go beyond its July 4th statement.

“The Biden administration needs to listen to the family’s ask for a full, transparent investigation,” said Hassan El-Tayyab, the legislative director for the Friends Committee on National Legislation, a Quaker peace group.

In an interview with Jewish Currents, Lina Abu Akleh, Shireen’s niece, said the family wanted to meet with Biden so he could “hear from us directly as the family of Shireen.” “We want clarity. We want accountability. And we also want to be provided with all the information and the details that they used in order to come up with that statement,” she added. The State Department’s July 4th statement based its conclusions on unnamed experts. State Department spokesperson Ned Price told reporters that two of the experts were from NATO member countries that help train Palestinian security forces, but exactly who the experts were, and what they told the US, remains unclear.

Even though members of the Abu Akleh family are angry at the State Department, they still want the US to investigate the killing because they have no trust in Israel’s ability to hold its own soldiers accountable. “You cannot be the suspect and investigator at the same time,” Lina said. “We don’t expect anything from their side in terms of transparent investigation.”

The Abu Akleh family’s call for a US investigation has not gone unheard in Washington. As Jewish Currents first reported last week, 11 Democrats led by Indiana Rep. Andre Carson introduced an amendment to the National Defense Authorization Act that would force the FBI and the State Department to investigate the killing of Shireen Abu Akleh and to determine whether US arms were used to kill her. On July 8th, Rep. Rashida Tlaib released her own response to the State Department’s pronouncement, criticizing the agency for failing “to carry out its mission as it relates to the murders of an American citizen” and calling on Biden to “obtain the names of the soldiers responsible for killing Shireen, along with that of their commanding officer, so that these individuals can be fully prosecuted for their crimes by the Department of Justice.”

“We’re very, very happy to see that kind of effort being made on the congressional level,” Lina said. “This reflects the values of the US—protecting human rights, democracy, and freedom of press.”

Chances are slim that the congressional efforts will succeed in forcing the US to undertake an unprecedented investigation into the killing of a US citizen at the hands of an army that receives billions in annual US aid. But Lina says that she will not stop seeking justice for her aunt. 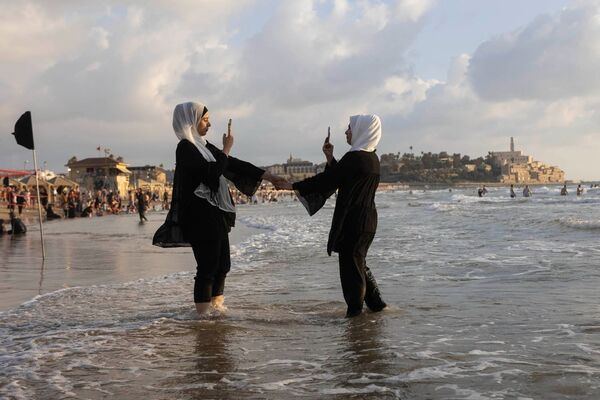 Palestinians enjoyed the beach in Jaffa during the July Eid al-Adha holiday. Thousands of Palestinians entered Jaffa and other cities in Israel, with special permits issued by the Israeli army for the holiday.