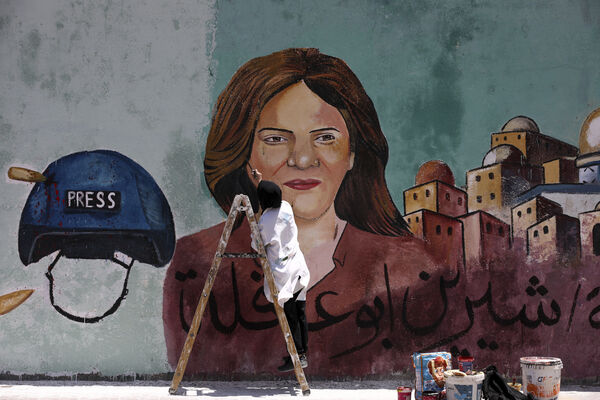 A Palestinian artist paints a mural in honor of slain Al Jazeera journalist Shireen Abu Akleh in Gaza, May 12th, 2022.

Six days ago, Shireen Abu Akleh, the legendary Al Jazeera journalist who spent more than two decades reporting on Israeli occupation and violence, was shot and killed while covering an Israeli military raid of the Jenin refugee camp. Palestinian eyewitnesses, including two other reporters, said Israeli soldiers shot at Abu Akleh and her colleagues as they tried to enter the camp. Though Israeli officials initially denied responsibility and blamed “armed Palestinians”— and though many prominent media institutions at first adopted the state’s line that Abu Akleh was killed amid “clashes”—social media quickly amplified the voices of those who witnessed her death: “​​The shooting didn’t come from the Palestinian side,” Shatha Hanaysha, a reporter for Ultra Palestine and Middle East Eye who was there with her, has said. “There weren’t any clashes.”

Abu Akleh became a correspondent for Al Jazeera in 1997, the year after its founding. Her reportage from occupied Palestine was singular, and so was the place she assumed in Palestinian life. The stories she brought to viewers throughout the Arabic-speaking world created an unparalleled record of life under Israeli rule. Her sign-off—“Shireen Abu Akleh, Al Jazeera, Ramallah, Palestine”—was anthemic. “When we were kids,” Abdallah Fayyad, a Boston Globe columnist, wrote, “my brother would often stand next to the TV toward the end of her broadcasts and sign off along with her.” As Dalia Hatuqa, a friend and fellow journalist, has recalled: “I know of a lot of girls who grew up basically standing in front of a mirror and holding their hair brushes and pretending to be Shireen.” Abu Akleh herself saw journalism as a way to be immersed in the lives of ordinary Palestinians. As she once said, “I chose journalism to be close to the people.” Last Friday, thousands gathered for her funeral in occupied East Jerusalem, where mourners were brutally attacked by Israeli police, who confiscated Palestinian flags and almost forced pallbearers to drop the casket bearing the woman who has been called Palestine’s voice.

For this week’s News Bulletin, three Palestinian writers remember Abu Akleh’s life and legacy, attesting to the moral force of her reporting and the threat it posed to Israel’s power.

The bullet. A single bullet. The bullet that landed just underneath her ear, in that small space left unprotected by the helmet she wore—was it fired from an Israeli rifle or a Palestinian rifle? This is what it comes down to now.

All other details have faded into the background. Gone, for example, is the fact that the Israeli army invaded Palestinian occupied territory when it had no business being there. Or the fact that this territory has been occupied for longer than she had been alive. Or that the grandparents of those who are today fighting the army with everything they can get their hands on—rifles, rocks, knives, Molotov cocktails—were forced out of their homes and into these slums, so that Jewish strangers could move in and build lives that might have been their own. Or that Palestinians’ own presumed leaders had given their coordinates to this army so that it could enter and pillage. Or that this is not the first time that Jenin has formed the frontline of colonization and dispossession, nor will it be the last.

All these facts, grounded in the history of this place, are somehow forgotten, or made

secondary to the single question that remains: the quest for a single piece of evidence that will be given undue weight, burdened with the responsibility of truth. History does not work this way. There will be no smoking gun.

Who shot Shireen Abu Akleh? Regardless of the provenance of that single bullet, she was murdered by an apartheid regime zealously committed to Jewish supremacy and the erasure of everything Palestinian. Shireen challenged the regime’s relentless, daily, sometimes banal violence by giving voice to those who Israeli apartheid was bent on silencing. In turn, she became the voice of our generation, and for that, her voice had to be silenced.

It was the Al Aqsa Intifada, from 2000 to 2005, that made Shireen Abu Akleh a household name in the Middle East and the Palestinian diaspora. The second Palestinian uprising was ignited by two events over two days: Ariel Sharon’s provocative visit to the Al Aqsa Mosque to launch his political campaign for the Israeli premiership, and an Israeli sniper’s killing of 12-year-old Mohammad Al Durra in Gaza while he crouched behind his father. Throughout the Al Aqsa Intifada, which saw the deaths of more than 3,000 Palestinians and over 1,000 Israelis, Shireen was on the scene reporting from besieged Palestinian towns and villages; she was one of the few reporters inside the Jenin refugee camp when Israeli occupation forces attacked Palestinians there. Her work represented a new kind of Arabic reportage, and directed the attention of the entire Middle East toward Israel’s use of extrajudicial killings, collective punishment, and excessive and disproportionate force, particularly against unarmed protesters. She humanized the Palestinian freedom struggle at a time when the United States and international cable networks were attempting to cast Palestinian resistance to military occupation as a strain of Al Qaeda religious extremism.

It is no small irony that Shireen became the subject of her own final story, or that her last moments harkened back to the early days of her career. Just as Shireen’s reporting illuminated Israeli violence during the Intifada, her death shines a light on Israel’s attempt to silence dissent by sniper fire. This time it was her body we saw on screen, shot just beneath the ear where her helmet and flak jacket, clearly marked “press,” could not protect her. And then there is the location of her death, in the Jenin refugee camp, where she reported two decades ago as most international media remained on the opposite side of Israel’s attacking forces.

Shireen’s life was more than the stories she told. She gave a voice to a people denied their peoplehood; she unapologetically and fearlessly asserted the credibility of the Palestinian lived experience; she brought the homeland to Palestinian diaspora communities that became empowered and inspired by the truth she exposed. She revealed the hollowness of Israel’s machinery of hasbara, or propaganda, and challenged her Israeli and international colleagues to do better.

Shireen’s murder may seem like another victory for Israel in its attempts to kill the Palestinian story, but Shireen has proved them wrong again. Her death, and the eyewitness accounts of her colleagues, cannot be easily discredited today precisely because of her work. Shireen’s storytelling inspired generations of young Arab girls and boys around the world. Her legacy is that neither the truth of Israeli apartheid nor the righteousness of the Palestinian cause can be silenced.

As I watched her body transported from hospital to hearse, wending its way from Jenin to Nablus, then Ramallah, and finally Jerusalem, I wondered how Shireen Abu Akleh would have covered her own funeral.

Her gravestone not yet etched, she is already a folk hero. Billboards were instantly erected in Manara Square in Ramallah, posters plastered on walls of villages and camps in Palestine and outside it. Social media avatars bear her serene smile, scholarships were announced in her name. Babies will be christened Shireen. There will be parks, schools, programs, institutes. There will be children’s books, songs, and poetry.

Mourners insisted on a martyr’s farewell. Palestinians have at every stop rejected her capture by wretched simulacrums of state pomp and pageantry. It’s been a long time since a coffin has made a journey such as hers in Palestine. Yasser Arafat’s funeral was confined to the West Bank, his request for burial in Jerusalem denied by Israeli authorities. Faisal Husseini’s funeral was in Jerusalem, inaccessible to the majority of Palestinians. A dead body still requires a passport. Shireen’s US citizenship may not have afforded her protection while alive, but at least she could be buried next to her parents on Mount Zion.

In a lilting Arabic, Shireen sent dispatches from Palestine into the homes of millions in the Arabic-speaking world. No bombast, no gravelly timbre; she directed her microphone to farmers and fighters, day workers and bureaucrats. Aerial shots of heaving crowds were replaced with close-range portraits of ordinary people in this or that camp, house, or school. She listened to them, she found them interesting. She gave them names, histories, specificity, and dignity. And through their experiences, she told stories of a colonized people fighting for freedom despite massacre and invasion, economic strangulation and cruel siege and exile.

People say that the grief one elicits reflects the kind of life one lived. Who was this journalist whose death could compel thousands into the streets in collective outrage and sorrow? How did this unassuming, middle-aged, middle-class Palestinian Christian woman live such that thousands of mostly young, mostly poor Palestinian Muslim men would swallow the endless blows of a colonizer’s baton before they would let her coffin fall? Nationalist canon has a way of swallowing the texture of personal biography, grafting collective desire unto flesh and memory. But when another intrepid reporter goes in search of an answer, I hope she carries with her Shireen’s notes on the propulsive power to be found in telling the stories of ordinary lives. 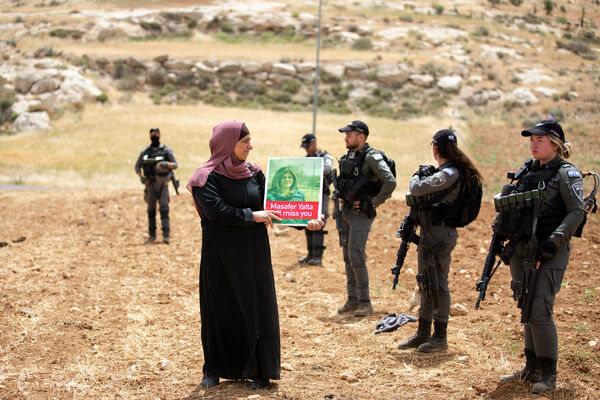 Hundreds of protesters contested the ethnic cleansing of Masafer Yatta, in the South Hebron Hills, on May 13th. Days earlier, the Palestinian journalist Shireen Abu Akleh was shot and killed while covering an Israeli military raid in the West Bank. Earlier this month, the Israeli Supreme Court ruled that residents of Masafer Yatta could be expelled from their land to allow the military to turn it into a training ground.