A letter from the editor in chief of New Voices, a publication by and for American Jewish students. 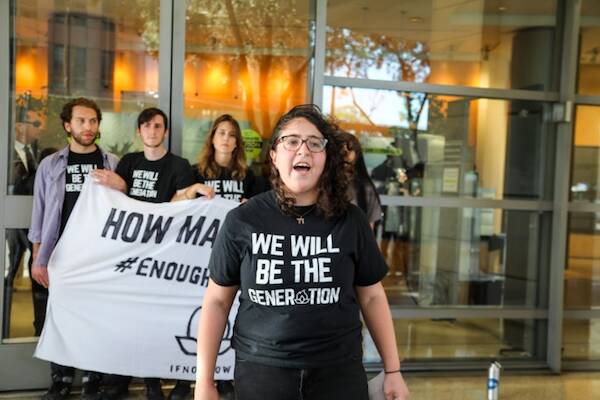 This letter was first published by New Voices, a news and commentary site about US campus Jewish life, under the headline "Our Nice Jewish Editor Will Focus on Abuses of Power." A warning: this article discusses sexual violence.

THE EVENING I interviewed to be the editor in chief of New Voices, I was nervous. I checked my hair in the webcam, set a water glass nearby, and waited for my internet to connect. When it did, several faces appeared. We all introduced ourselves, smiling, and as the questions began, I sat back and relaxed my shoulders. I talked about my experiences as a student journalist and my love for scrappy Jewish media.

I also described my involvement in Jewish community, including as a leader with IfNotNow, a growing movement of young American Jews trying to end Jewish American support for the Occupation. One of my interviewers immediately became animated.

He really wanted to understand, it seemed, how I held both a strong Jewish identity and a commitment to anti-Occupation work. He asked how I had gotten involved with the group, but before I could fully answer, he cut me off with a barrage of questions.

Where had I gone to synagogue growing up? What was the name of my childhood Rabbi? Had I been involved in a Jewish youth group? The local Jewish Community Center (JCC)? I laughed, trying to catch up with him, explaining that I gone to a reform shul, no youth group, and had gone swimming at the local JCC, where I also worked as a camp counselor one summer.

I was a little shaken that the interview had taken a turn towards the personal, but I felt better as we went back to discussing style guides—until that interviewer spoke up again. He wanted to make sure that I hadn’t misinterpreted his questions. They had come from a good place—no ill will. Of course, I said. I understood completely.

I remember this moment clearly—the relief I felt in being welcomed back into the fold after being challenged. How good it felt to dismiss the tension of earlier and sink into an understanding that no harm had been meant—or done. I was being given the opportunity to reclaim my role as the good Jewish girl, and I grasped for it immediately.

It came as no surprise for me to find out later that my curious interviewer had been none other than Steven M. Cohen, famed sociologist of Jewish American life. Cohen has spent his career studying the threats to Jewish continuity, which perhaps include the trend he highlights of “highly engaged young American Jews” being immersed in Jewish life yet remaining critical of Israel. As he puts in one article, we show a “much-diminished sensitivity to matters of external threats to Jews” than our elders. Those threats? “Intermarriage, anti-Semitism, Israel’s security, and campaigns to delegitimize Israel.”

At the time of my interview, Cohen was a member of the New Voices board. When allegations against him of sexual harassment and assault were published on Thursday, we removed him from his role. Almost every woman interviewed for the New York Jewish Week article said that a power differential existed at the time of their reported incidents.

A spate of excellent op-eds published in the aftermath of Thursday’s article have gotten me thinking about the connections between Cohen’s abuse, the values of continuity research, and the subversive possibilities that we have at New Voices to challenge a toxic culture with on-the-ground reporting.

In their article “How Jewish Academic Created A #MeToo Disaster,” authors Kate Rosenblatt, Ronit Stahl, and Lila Corwin Berman draw a clear line between Cohen’s sense of entitlement towards women’s bodies and his solution to the crisis of Jewish continuity: Jewish women producing more Jewish babies. “It’s time to acknowledge that a communal obsession with sex and statistics has created pernicious and damaging norms,” they write. “These norms make it okay to tell women how to use their bodies, whom to marry, when to have babies, and how to allocate their time.”

Rokhl Kafrissen builds on this theme in her piece, “How A #MeToo Scandal Proved What We Already Know: ‘Jewish Continuity’ is Sexist.” In it, she quotes philosopher Kate Manne. “‘Patriarchies . . . depend on loving mothers, good wives, cool girlfriends, loyal secretaries.’” Kafrissen takes it a step further. “And, I would add, good Jewish girls, the kind who marry other Jews and make Jewish babies, at least two, please, to meet replacement rates.”

I would push even further—good Jewish girls don’t serve the Jewish cause solely through baby-making. They also don’t criticize Israel. They don’t rock the boat. And most of all, when faced with sexual harassment or violence, they don’t make trouble.

One of the eight women whose stories are highlighted in last week’s article described what happened when she tried to report that Cohen had assaulted her.

When she told her program supervisor what had happened, he said, “If you have a complaint, take it up with the law.” He also “screamed at me to stop ruining this man’s life,” she recalled. “He said, ‘He [Cohen] has kids and a wife—do you want that on your conscience?’”

Of course, the truth is that nice Jewish girls do make trouble. But when we do, we are accused of all sorts of things—broadly, that we are not nice and/or not Jewish.

My glimpse of Cohen was nothing, a minute of discomfort that I brushed aside. But the implications of the questions he asked me were clear—I had violated the nice Jewish girl code, and I needed to prove myself nice and Jewish enough to get back in good standing. At first, that’s all I wanted to do. In the moment I describe above, I would have done anything to be accepted, adored, hired.

However, as I’ve read over some of Cohen’s published work, I’ve realized that people like me who make trouble have a critical role to play.

As queer people, activists critical of the Israeli occupation, members of interfaith families, and students living in deep community with people of other backgrounds, my generation of young American Jews is challenging Cohen’s vision of continuity just by existing. We are threats to the status quo, to the Jewish world remaining unchanged. And by being a threat, we have a role: to push us in the direction of justice.

I believe that good, fair reporting can bring about justice. That’s why I will be focusing on abuses of power within Jewish spaces during my tenure as editor in chief. New Voices will continue to be a platform for personal essays, divrei Torah, and op-eds, but it will also be home to rigorous investigative reporting by students who are already immersed in communities on the front lines of the Jewish #MeToo movement.

Over the past few months, several articles have been published that have shaken me and my Jewish peers to the core. Investigations into sexual misconduct in Jewish institutional spaces have unearthed abuse in the very communities built for us as young Jews—Birthright, summer camp, and now, Jewish Studies departments. At the heart of each of these stories are the sacrifices made in the name of continuity. Ironically, the institutions aiming to preserve the Jewish people have put young Jews in harm’s way.

That is why it is our job to create safe and inclusive Jewish spaces for ourselves. As a journalist, I know that the first step is reporting on injustice. It’s up to us to investigate what is happening within our own communities.

I believe in the young writers I’ve gotten to know and will soon meet, all of them brave, smart, and, as the tide changes, not willing to be silenced. Look out for their reporting over the next year. They will be busy doing what nice Jewish kids do best—wrestling with new knowledge, challenging authority, and questioning everything.

Abby Holtzman is the editor in chief of New Voices.