Is ‘The Marvelous Mrs. Maisel’ in on the Joke?

For all the affection Mrs. Maisel showers on Jewish comedy, it doesn”t seem to understand its function. 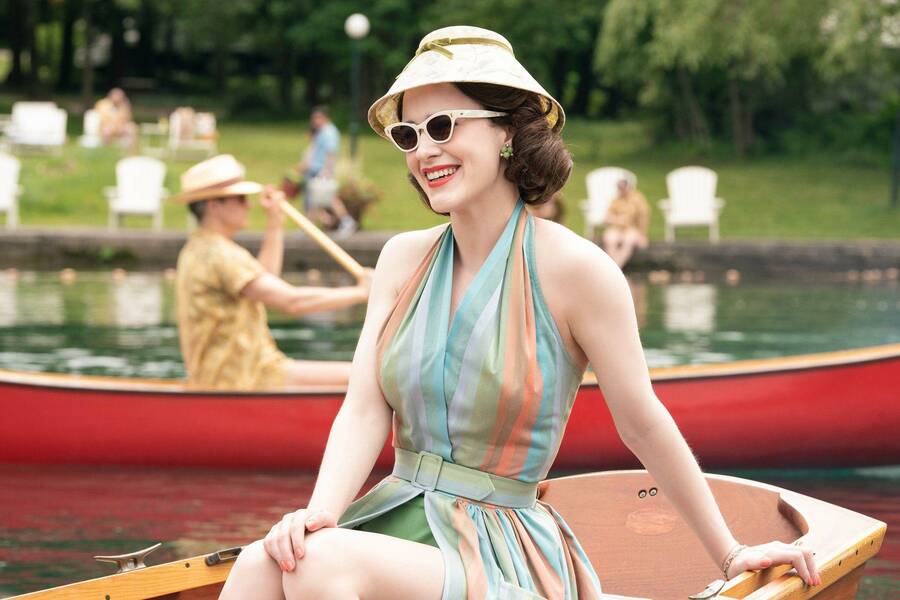 MY FAVORITE MOMENT thus far in The Marvelous Mrs. Maisel comes midway through its second season, which premiered on Amazon this week. The titular Miriam Maisel, an Upper West Side mother of two still sufficiently young and gay, in the old-fashioned sense, to be described as adorable (“marvelous” strikes me as too matronly for her), has been separated for a year from her husband, and is on her first date with another man. As her marriage unraveled in Season 1, Miriam embarked on a double life as a downtown underground comic. Tonight, daring her two personas to exist within one room, she has brought her suitor, an arrogant physician, to a midtown Manhattan comedy club, where her friend Lenny Bruce (Luke Kirby) is finishing a set. “A doctor!” Lenny beams at Miriam when they get a moment alone. “Your parents must be kvelling.”

They are in on something together, Miriam and Lenny. Criminal activity, for one thing. The night of her comedic debut, Miriam goes so hard that the cops show up and lead her away in handcuffs. (She’s mimed a blow job and shown her tits—but for a joke.) She and Lenny, who is regularly arrested for his act, wind up in the same squad car; soon, they’re bailing each other out of jail, and he’s helping launch her career. Arguably, shared obscenity charges alone mark the two as partners in a Jewish conspiracy against American decency. Bruce, who insisted on cursing in both English and Yiddish, and was heavily pursued by law enforcement for his vulgar and godless act, has often been seen as exemplary of a postwar moment at which American Jewish artists and agitators reveled in the association of “dirty” and “Jew.” His protégés included the sweetly scandalous Joan Rivers—a key inspiration, according to Mrs. Maisel’s creators Amy Sherman-Palladino and her husband Daniel Palladino, for Miriam.

But Miriam and Lenny also share a sharp ear for the more mundane peccadilloes of American Jews—not to mention goyim—and a willingness to spill the beans about them. “The Army is goyish. The Navy is goyish. The Marine Corps is goyish. The Air Force? Jewish,” Lenny explains to a packed house in an episode early in Season 1. “Kool-Aid: goyish. Instant potatoes: scary goyish.” It’s a classic Bruce bit, still hilarious after all these years because it’s delivered with the authority of someone who understands that his own culture both inarguably exists and is entirely made up. Bruce and company were not, of course, the first performers to flaunt their Jewishness on stage and screen, and yet to say “kvelling” in public signifies differently if you have already run afoul of the law for saying “cocksucker.” Lenny, teasing Miriam, merely whispers it—“kvelling,” I mean—quietly recognizing the simultaneity of her two lives, and, by extension, his own. It is a lovely, intimate moment that flips transgression’s script—not the obvious apostasy of eating a ham sandwich in a kosher kitchen, but the more delectable sin of savoring your grandmother’s noodle kugel behind the stained velvet curtain of a strip club. Unfortunately, in this show, there aren’t enough like it.

I DON’T actually hate The Marvelous Mrs. Maisel—not at all, not even as a grinch who never quite understood the charms of Stars Hollow, the life-sized snow globe that Sherman-Palladino’s most famous creations, the Gilmore girls, call home. I thought I might. The gratuitous alliteration of that title, conjuring a long-lost Technicolor Mary Poppins rip-off about a Jewish fairy godmother, is a lot to handle. But it is a whacky pleasure to watch Miriam—a coiled spring, at the outset of the series, who checks her circumferences every day with a tape measure and writes them down in a little book—set herself, however partially, free. Mrs. Maisel’s tale of self-invention involves a clever reversal: Miriam gets revenge on her schmendrick husband by snatching his own dumb hobby—he regularly bombs open mic night at a Greenwich Village haunt called the Gaslight Café (get it?)—and transforming it into art. By Season 2, Miriam is playing venues from a sleazy New Jersey joint full of heckling male comics to Polynesian Night at a Catskills resort; her delightfully deranged performances tend to be the highlights of the show. Lenny’s sets, and acts from characters based on other 1950s nightlife fixtures like Red Skelton, further flesh out a seductive basement world where uptown and downtown audiences, black, white, and Jewish, gather to laugh at themselves.

Too often, though, Mrs. Maisel itself feels like a variety hour in need of a trustworthy emcee. Its domestic scenes are heavily mannered, teetering on the line between sitcom antics and high melodrama. Halfway through the show’s pilot, Miriam’s absentminded-Columbia-professor father, Abe—the beloved character actor Tony Shalhoub—establishes Mrs. Maisel’s high bar for “standard reaction to bad news”: upon learning that his son-in-law is a scoundrel, he slams the doors of his study and starts banging out a Rachmaninoff concerto on the piano. (When characters really get upset, we discover early in the show’s second season, they move to Paris without telling anyone.) Sometimes Mrs. Maisel resembles a musical without enough musical numbers, sumptuous but unsatisfying. I don’t just mean this metaphorically. The first voice we hear in Season 2 is Barbra Streisand’s, belting out Hello, Dolly’s anthem of feminine competence, “Just Leave Everything to Me,” as the camera whooshes around B. Altman’s immaculate makeup counters and then down to its switchboard room, where rows of perfectly coiffed telephone operators direct calls with the precision of a chorus line in swivel chairs. The choreography is ravishing, but the players never quite break into song.

Perhaps it is fitting that Mrs. Maisel wobbles a bit histrionically between genres. After all, the same could be said of its characters, who haven’t decided whether wealthy, assimilated Jews are actually just gaudier Episcopalians. Often, though, it seems that the show’s Jewishness merely functions as an excuse for its tonal incoherence, like bad synagogue architecture. As in Gilmore Girls, Mrs. Maisel relishes the spectacle of arrested development produced when prodigal children are forced to return to the nests they’ve fled—in the wake of their separation, both Miriam and Joel end up in their childhood rooms back at their respective parents’. Mrs. Maisel’s ethnic twist suggests that the postmodern family looks suspiciously like a premodern one: Anatevka on the Upper West Side. It’s a promising observation—after all, what was the nuclear family but a fantasy about whiteness and modernity on which midcentury Jews had only a slippery hold? But Mrs. Maisel declines to pursue this insight further, falling back instead on tired tropes: dueling machatunim, overbearing Jewish mothers. Mrs. Maisel may be the dinner theater of award-winning television: sometimes jarringly glib, at other times highly entertaining, but often not much more.

MRS. MAISEL’S SECOND SEASON departs from its first largely by mixing up the setting. First, we find ourselves in Paris, then at a Catskills resort called Camp Steiner, a mesmerizingly culty place that, with its unfiltered shtetl gossip, Germanic levels of organized fun, and omnipresent PA system, offers perhaps the most compelling read on American Jewish culture of anything the show has yet offered. The Borscht Belt, of course, was also the proving ground for Jewish comics from Jerry Lewis to Andy Kaufman—a fact that does not go unnoticed by Miriam’s manager Susie Myerson (Alex Borstein), a hardboiled showbiz vet in a newsboy cap and suspenders who serves as our heroine’s prole foil.

Miriam, for her part, remains spasmodically committed to keeping her uptown world from discovering her downtown alter ego, but has also become addicted to the limelight. And so, like a wine mom downing fourteen Dixie cups of rosé at a birthday picnic, she has simply begun launching into comedy routines everywhere she goes, and regardless of whether they are welcome. On some occasions—like a friend’s Catholic wedding, where Miriam discharges a torrent of sex jokes in the form of a toast—they emphatically are not. Mrs. Maisel seems to understand this behavior as eccentric, but has not inquired more deeply into the shape of its pathology, the way a series like Crazy Ex-Girlfriend would. This is a shame, because it leaves underexplored what might be the most interesting question raised by its premise: what would happen to a woman split down the middle this way, importing humiliations from her domestic life and exporting them, transformed into jokes, to hungry audiences—only to find the proceeds of this labor unspendable back at home?

From the very first episode of Mrs. Maisel, all of which I’ve watched in the past few weeks, I found myself thinking about Nanette, Australian comic Hannah Gadsby’s standup special released by Netflix this past summer. A sort of meta-comedic performance lecture, Nanette turns its critical gaze on standup itself. Comics are allowed to tell ugly truths onstage, Gadsby contends in her act, but only if they pivot to a punchline before things start getting too real—thus effectively sugarcoating experiences of violence and trauma. Nanette was extensively praised as offering a queer, feminist critique of comedy’s silencing effects. But in one of the few negative reviews the special garnered, the writer P.E. Moskowitz argued that Nanette effected its own kind of erasure. What of the long history of comedy, standup and otherwise, that marginalized subjects have used to work through trauma, not around it? What, Moskowitz asks, about American Jews?

Mrs. Maisel might be read as offering a similar riposte to Gadsby’s theory of the joke. Comedy changes Miriam, and Miriam—channeling pathbreaking 1960s comediennes like Rivers and Phyllis Diller—changes comedy. But as Mrs. Maisel goes on, its eagerness to credit the cathartic effects of standup for the fact that Miriam is doing just fine, thank you, can feel like protesting too much. Addressing a Parisian nightclub in the show’s Season 2 premiere, Miriam—who has invited herself onstage, as is her wont—triumphantly describes how comedy saved her when her “perfect life” fell apart the year before. Ironically enough, her spoken-word self-righteousness in this scene reminds me a bit of the tone that pervades Nanette.

There is, it’s only fair to say, a twist. At first, Miriam has the crowd in the palm of her hand. But by the end of her monologue she has lost them; she has stopped telling jokes, and become simply an American woman complaining about her ex-husband to a confused French audience. When she awkwardly departs the stage, some listeners weep with her, but nobody claps. Afterward, her impromptu translator for the evening hands her a psychiatrist’s card. “He’s done wonders for my friend Sylvia Plath,” the woman says. It’s a wicked, wild moment that hints at something darker than the show is ordinarily willing to countenance. And yet it seems to support Gadsby’s idea that a truly authentic comedic production is one with the punchlines taken out. It’s a Kool-Aid and instant potatoes vision of performance—and it’s why, for all the genuine affection Mrs. Maisel showers on Jewish comedy, I’m not convinced this show is entirely in on the joke.

Ari M. Brostoff is the culture editor of Jewish Currents.

Slow Burn: Quarantine Edition
Exodus: Pekudai
Can people in pursuit of freedom trust each other?
Ari M. Brostoff
Dispatch
The Passion of 964 Park Place
A standoff between tenant organizers and yeshiva students over the fate of a Black family’s home summoned the specter of the Crown Heights riots, and provided an object lesson in housing activism at the end of the Covid eviction moratorium.
Ari M. Brostoff
Sign up for our email newsletter, featuring exclusive original content