A letter-writer asks whether it’s cultural appropriation to take a job at an Israeli hummus joint, and more. 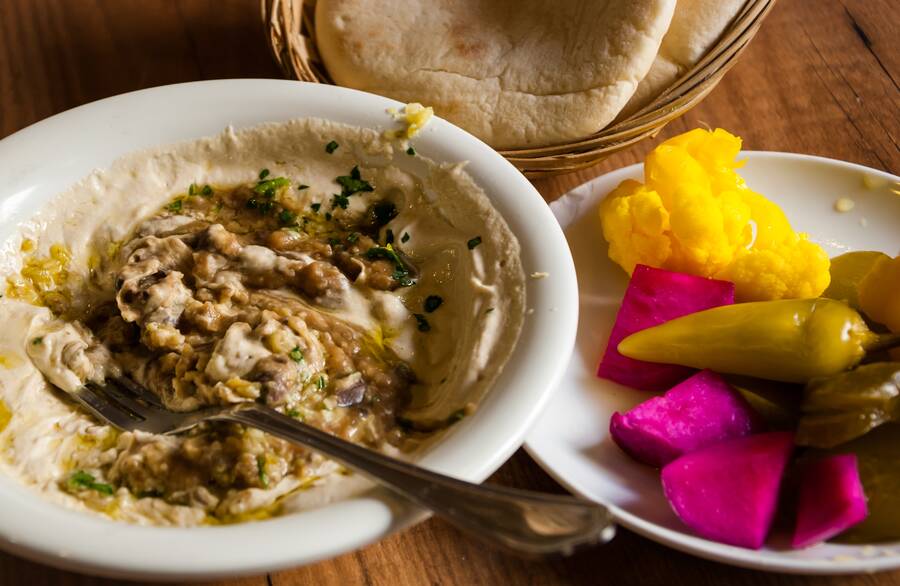 Recently, I applied to a job at a trendy hummus restaurant in my city. This restaurant is owned by someone who was raised by Israelis in the US, but learned how to make hummus in Haifa. After I found out I was offered the job, I ended up doing some research and read articles about how calling hummus “Israeli” is cultural appropriation and/or outright theft. I have found these arguments hard to disagree with, and it has made it difficult for me to decide whether or not to take the job. If I were to work there, would I be complicit in cultural theft and appropriation?

First, a disclaimer: Emma Scoldman is incredibly Ashkenazi. Because you didn’t mention this food being related to your own family’s culinary traditions, I’m going to guess that you are, too. So take what I’m about to say about foods from Middle Eastern countries with a grain of not-from-the-AHAVA-factory salt.

I can’t let this question pass without giving a shout-out to one of my favorite restaurants. Besides being delicious, Kubeh in the West Village is a good example of how to navigate this. Melanie Shurka, the Iranian-Israeli chef and owner, directly credits the culinary cultures—Iranian, Syrian, Lebanese, Kurdish, Palestinian, and Iraqi—that influenced her restaurant’s menu. I raise this example to illustrate that it is more than possible to serve food that Israeli people eat without erasing Palestinian and Middle Eastern culinary traditions under the blanket term “Israeli.”

You ask whether or not working at this restaurant makes you complicit in cultural appropriation. Since you didn’t mention any sort of management position, I assume you’d be waiting tables or doing some other form of service work. This is relevant: to the extent that the labor of wait staff allows the restaurant to keep going, yes, you might technically be complicit. However, the restaurant owner bears the vast majority of the responsibility for this culinary erasure, and the nature of waiting tables does not lend itself to being able to speak out and change the restaurant’s practices from within.

It seems that you’re hesitant to work at this restaurant, so if you have other options, I’d certainly suggest looking into them. At the same time, we do still live under capitalism (no ethical consumption, etc., etc.), and it’s difficult to find employment that is 100% in line with our values, 100% of the time. If you do end up working there, I think you can cut yourself some slack, knowing that, as far as the hierarchy of responsibility for these various forms of exploitation goes, you are pretty low on the proverbial food chain. Whatever choice you make, keep fighting for Palestinian freedom and dignity in as many facets of your life as you can.

I’m an observant Jew with leftist leanings and I’m struggling with how to comport myself at my in-laws modern Orthodox and very Zionist synagogue. In my home community, I usually leave or stay seated during the prayer for Israel, in rejection of the occupation and in solidarity with Palestinians living under Israel’s yoke. But I think it would cause a scene if I did anything other than mumble the prayer when visiting my spouse’s parents. What should I do? Do I stay true to myself or let it go?

I Can’t Stand It

In-laws are so tough, aren’t they? They’re supposed to be your family, but you’re not allowed to yell at them.

The question, to my mind, is not whether or not you should let go of your highly principled (and deeply Jewish) opposition to the occupation, but how to handle the pushback you will likely receive as a result of your opposition. You don’t mention your spouse’s politics, so I’m going to assume that they’re not wildly divergent from your own. I raise this because the most important thing is for the two of you to have a united front. They don’t need to sit or leave for the prayer along with you (though it would be great if they did!), but it’s important that the two of you are on the same page if their family gives you a hard time about it.

It seems that there are two potential sources of conflict here: one between you and your in-laws, the other between your in-laws and their larger community. Regarding the first, I think you may not be able to avoid a conversation with your in-laws about your views (there is a time and place for long discussions about apartheid and military occupation and how praying for a nation-state might be akin to idolatry, and there is also a time and place for “I don’t feel that the prayer for Israel aligns with my values.” You can use your best judgment about which one is more appropriate in a given scenario.). Your spouse need not participate in any resulting arguments, but they should support your right to express your beliefs, and step in if any disagreements from their relatives cross the line into personal attacks.

In the event that your in-laws have to deal with the chatter of friends and acquaintances, let them know they are more than welcome to say, “That’s their opinion, next time you’re welcome to ask them.” Part of having the courage of your convictions means that your politics are not your in-laws’ responsibility to explain. You can and should do that yourself. If someone in the congregation does want to speak with you about your choice (notice I said “speak with,” not “scream at”), you should absolutely take them up on that opportunity. Only by risking discomfort do you have any chance of changing the status quo.

I grew up in a “traditional” Jewish family whose politics lean center-left except when it comes to Israel. My parents have considered not voting for certain politicians because they didn’t go to AIPAC conferences or were too harsh on Israel for its shooting of Gazan civilians. Having left my home years ago for school, I’ve shifted from Zionist to liberal Zionist to anti-Zionist, but I’ve rarely mentioned it to my family because whenever I do, it quickly turns into a shouting match.

Recently, I’ve noticed my mother and grandmother sharing posts on Facebook by groups like StandWithUs, with really regressive messaging (calling the West Bank Judea and Samaria, attacking Airbnb for no longer listing homes in Jewish Settlements). Each time I scroll past these posts, I can’t help but physically cringe. I keep wanting to engage my relatives, but I’m afraid that anything critical I say will only further alienate me from them. Is it worth engaging with my relatives even if I risk ruining my relationship with them? Or should I just ignore their heinous beliefs for the sake of “shalom bayit” while using my energy to organize others outside of my family?

Thanks,
Fake Friend of the IDF

When I was a teenager, having grown up in a fairly uncritically Zionist environment, I took a high school English class alongside a young Israeli-American. During a unit on ghost stories and monsters, my classmate wrote about how Israeli society dehumanizes Palestinians, portraying them as monsters. That was the first time I’d considered the idea that perhaps the narrative I’d been taught was, at the very least, incomplete. I can draw a direct (if long) line between being 16 years old and hearing that short story to where I am now, writing for an explicitly diasporist publication and organizing against the occupation in my spare time.

Just before Thanksgiving, as so many progressive folks were agonizing over how to handle That Relative with Those Bad Opinions, @gperez8696 tweeted: “Argue with your racist relatives but at the same time radicalize your cousins. That’s praxis folks!” I agree with them. You’re unlikely to change all of your relatives’ minds. But do you have younger cousins? Are there kids in your family who haven’t yet been exposed to the “radical” idea that Palestinians are human beings? It’s telling that, while teenage Emma Scoldman had never listened to Palestinian perspectives and experiences, a leftist Israeli narrative completely shook my worldview. I’d internalized the racist and violent idea that Palestinians were inherently threatening, but because this peer of mine was Jewish and Israeli and therefore “safe,” I was able to listen with an open mind.

To be clear, I am not proud of this. It is deeply sad and infuriating that so much of our community thinks this way. However, despite what some on the left would have you believe, no one was born radicalized and everyone has work to do. By engaging with your family (and I urge you to do so with some degree of kindness) you have the potential to provide that more comfortable space for your younger relatives to learn.

Back to your mother and grandmother. As I said, I do think you should focus on battles you can win, which may not always mean engaging in no-holds-barred arguments. But this doesn’t mean letting every harmful comment slide. By holding firm in your beliefs, you may make it less comfortable for them to say racist things in front of you. Whether or not you’re able to change their beliefs, you might be able to change their behavior. This would have the added bonus of making it easier for those younger cousins of yours to explore anti-occupation politics with less fear of family rifts.

I know it can be hard to confront family. But the large-scale stakes are so high, it’s our responsibility to at least try.

Dear Emma Scoldman
Dilemma in Delhi
Advice columnist Emma Scoldman answers letters from a traveler who doesn’t want to harden his heart, and more.
Emma Scoldman
Sign up for our email newsletter, featuring exclusive original content
Short on time?
Sign up for our weekly Monday roundup of everything you missed in Jewish Currents last week.