The Homeless: Disparaged and Scorned

Actually, we don’t have the slightest idea what the homeless need. 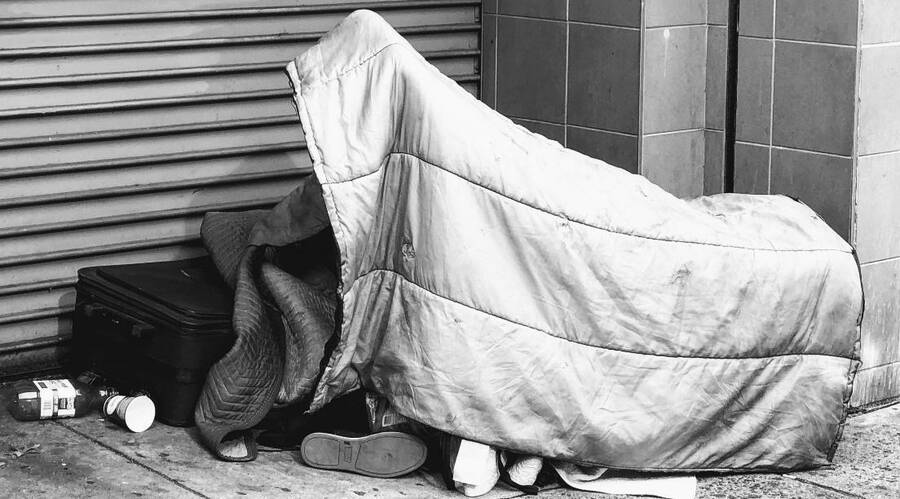 A homeless man encamped on the Upper West Side, NYC. Courtesy of the author.
Tweet Copy Link Email Print

IN EDWARD ALBEE’S play The Zoo Story, Peter, an executive in a small publishing house who lives in a comfortable apartment on the Upper East Side with his wife, two daughters and two parakeets meets Jerry in Central Park, a self-described “permanent transient” who lives in a “sickening rooming-house on the West Side”. When Jerry suddenly declares he wants the bench he is sharing with Peter to himself, Peter refuses to move, responding ironically, “People can’t have everything they want. You should know that; it’s a rule; people can have some of the things they want, but they can’t have everything.” After Jerry calls Peter a “vegetable,” Peter loses his composure, angrily warning Jerry that he has put up with him “LONG ENOUGH.” He instructs Jerry to “Go away” and threatens to call the police. Brazenly, Jerry responds, “(you have) everything in the world you want . . . you have everything, and now you want this bench . . . are these the things men fight for . . . is this your honor? . . . Don’t you have any idea, not even the slightest, what other people need?”

Actually, we don’t have the slightest idea what the homeless need. Peter’s sense of entitlement together with his disparagement of Jerry, underscore the scorn the homeless suffer as they struggle to create homes for themselves from within their deprived circumstances. The homeless are the real “deplorables.” They suffer our indignation. We express concern for their well-being as long as they don’t occupy a space on the sidewalk. We advocate more money for building shelters but we oppose building them in our neighborhood.

The reaction of a resident of Manhattan’s “Billionaires Row” neighborhood to New York City’s plan to convert the former Park Savoy Hotel on West 58th street into a shelter for 150 single homeless men typifies the stigmatization directed towards the homeless. The Savoy sits in the shadow of One57, a 75-story super-luxury residential skyscraper where the top-floor penthouse sold for $100.5 million in 2011. The resident told the Guardian, “The people here are uppity, they don’t like it. I’m for helping the homeless people, but I think they could have placed the shelter elsewhere.”

Far worse, the estimated 193,000 homeless people typically on the streets each night across the country face frequent dangers, some of which are life threatening and even fatal. As part of an ongoing project this past year highlighting “peoples and places that are grappling with the homeless crisis,” the Guardian has uncovered at least 50 cases of dumpster-related homeless deaths and serious injuries to homeless people who depend on the garbage tossed into dumpsters to sustain themselves. In San Diego, in response to the city’s overwhelming homeless crisis, they reported that homeless clean-up crews swept up a tent with a person still inside, almost compacting them in a garbage truck. This was not a unique incident; similar examples were found in other places. To deter a homeless encampment on a stretch of pavement underneath highway 99, the city of Seattle, another city dealing with a burgeoning homeless population, installed bike racks along the pavement. These “anti-homeless Spikes” are not dissimilar to the anti-homeless seating found on New York City’s sidewalks or at Penn Station.

The U.S. Department of Housing and Urban Development’s (HUD) estimates published in their Annual Homeless Assessment Report to Congress — an annual survey conducted on one night of the year to provide an estimate of the number of sheltered and unsheltered homeless — are the most readily available and consistent data on the extent of homelessness. The estimates suggest homelessness has been declining, although in 2017 it increased slightly. The 2017counts estimated 553,742 homeless people, slightly above the 2016 number of 549,928 homeless but lower than the 647,784 counts for 2007.

The slight growth in 2017 occurred because America’s 50 largest cities face a growing homeless population. The increase in their “unsheltered” homeless population—people whose “primary nighttime location was a public or private space that is not designated for, or ordinarily used as, a regular sleeping accommodation for people (e.g., the streets, vehicles, or parks)”—is most visible in Los Angeles where four-fifths of the homeless population are unsheltered. Like New York City, which plans to open 90 shelters over the next five years, Los Angeles has faced resistance to its plan to open an initial 10 shelters from “neighborhood groups anxious about having people with addiction and mental health problems move in next door.”

New York City’s homeless population grew by 4.1 percent in 2017 according to HUD’s estimates, reaching 76,501 people, in total. Of these, almost 4,000 individuals were living on the street. The number of homeless in New York City far outnumbers those in any other city; the next largest is Los Angeles with 55,188 people and then Seattle with 11,643 people in 2017.

THE FULL EXTENT of the pervasiveness of homelessness is concealed from our daily lives. In fact, it is far more prevalent than we are led to believe from the data published by official government sources.

Official estimates significantly undercount the number of homeless, depreciating the magnitude of homelessness in this country. First, the count is conducted on a single day only. Homelessness is transitory. Annual data do a better job capturing the flow of individuals moving in and out of homeless during the course of the year. For example, in January 2018, New York City homeless shelters housed 63,101 men, women, and children each night, slightly less than the new all-time high of 63,485 in December 2017. Yet, over the course of fiscal year 2017, a record 129,803 unique individuals — twice as many — spent some time in a shelter in New York City. A 2001 study using data collected from administrative records of homeless services providers in nine US jurisdictions found that the annual homeless population ranged from 2.5 times greater in Spokane Washington to 10.2 times greater in Rhode Island than the  estimates.

Second, there is no common definition of who counts as homeless. HUD excludes people who are ‘doubled up’ (living in someone else’s home) or ‘couch surfing’ in its number of homeless as well as homeless individuals who may be in hospital or in jail on the day of the count. Counts of homeless children and youth enrolled in public schools conducted by the U.S. Department of Education have gone up every year since data was first collected in 2003. Their count for homeless children alone is almost 2.5 times as large as HUD’s estimates for the entire homeless population. In contrast to HUD, the Department of Education includes children who are homeless at any time during the year, including those who are living “doubled up,” staying in hotels/motels, abandoned in hospitals, or awaiting foster care placement.

Even, the Department of Education’s counts may be low. A recent national survey of homeless youth undertaken by Chapin Hall at the University of Chicago suggests that the number of homeless is probably even higher. They estimated that approximately one in ten young adults ages 18 to 25 — an outrageous 3.5 million young adults — and at least one in thirty adolescents ages 13 to 17 — about 700,000 — undergo some form of homelessness over a 12-month period. These counts include out-of-school youth, not included in the Department of Education’s counts.

Third, because homelessness is criminalized in some places, the homeless may intentionally hide from public view causing them not to be seen on the day of the count. In Houston, for example, a recent ruling enforcing an ordinance that prohibits the setting up of tents and temporary living quarters in public spaces effectively makes homelessness a crime.

First, we need to end the dehumanizing of the homeless and to accept their humanity. The homeless share our desire to make a home. As Susan Fraiman writes: “In fact, being homeless brings out the very things that make us human: our creation of domestic rituals, care for others, ingenuity in shaping our environment.”

The humanity of the homeless, as Fraiman describes, are skillfully portrayed in Marc Singer’s documentary movie Dark Days, which illustrates how the homeless seek to create homes for themselves. It follows a community of homeless people living in an abandoned Amtrak tunnel on the west side of Manhattan in the late 1990s. Some of the residents had lived there for as many as 25 years before Amtrak reclaimed the tunnel and dispersed the inhabitants. An unapologetic portrayal of the residents’ daily lives, it shows how they take pride in their living quarters, maintain their homes and organize living among the rats and darkness below ground and tour Manhattan’s streets during the day searching through garbage bins for plastics and other resalable items that will earn them enough money to ensure their survival.

Second, we need to safeguard the civil and human rights of the homeless. Enactment of a homeless bill of rights would affirm that homeless people have equal rights to medical care, free speech, free movement, voting, opportunities for employment and privacy. Four states—California Connecticut Illinois and Rhode Island—have enacted a homeless bill of rights.

Recognizing the rights of the homeless would end the criminalization of homelessness. The Obama administration warned that local laws criminalizing homelessness could violate the Constitution’s protections against cruel and unusual punishment. Nevertheless, half of all American cities have some kind of anti-camping law. The growing homeless crisis facing many cities, however, has prompted a reconsideration of urban homeless policies.

Third, we need to recognize that housing is a fundamental human right. Everyone should be provided with housing security. As Peter Marcuse and David Madden have written, housing policy needs to undergo radical transformative changes in order to realize the right to housing:

As we recall Martin Luther King on the 50th anniversary of his death, we can do well to recall his radical views on the changes our society needs to undertake to eradicate poverty, and by extension, homelessness:

True compassion is more than flinging a coin to a beggar; it is not haphazard and superficial. It comes to see that an edifice which produces beggars needs restructuring. A true revolution of values will soon look uneasily on the glaring contrast of poverty and wealth…and say “This is not just.”

Allan Lichtenstein, a contributing writer to our website and magazine, has a Ph.D in urban planning from Rutgers University and has been working in the field of poverty research for nine years. He grew up in South Africa, lived in Israel for sixteen years, and has lived in the U.S. since 1986.