The St. Petersburg-based klezmer ensemble brings the party to Little Odessa and the East Village. 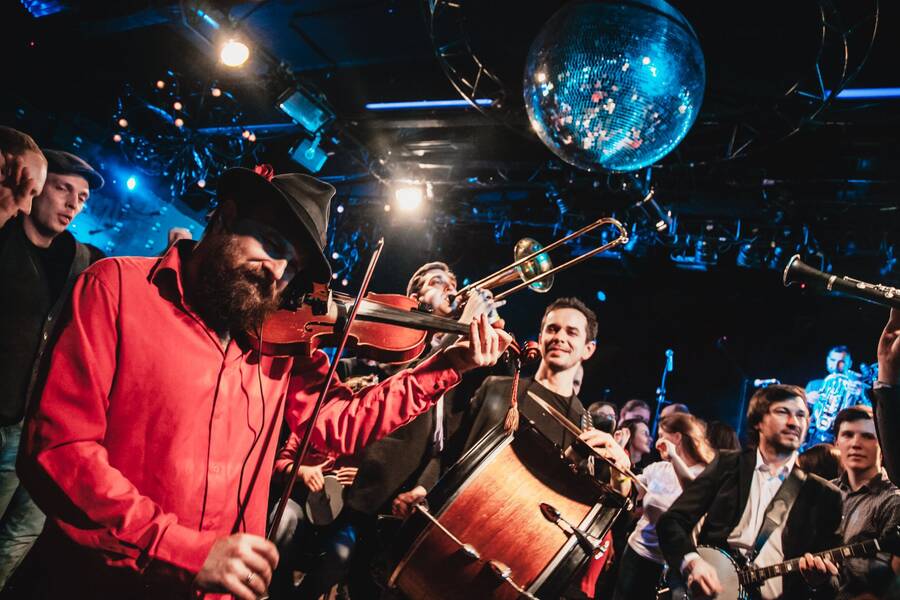 ON AN OPPRESSIVELY HOT summer evening in early September, in the Russian-speaking immigrant enclave of Brooklyn’s Brighton Beach, a sweaty crowd packed a local bistro. They were there to catch the St. Petersburg-based ensemble Dobranotch, making a rare appearance on American soil. The seven-piece klezmer/Balkan outfit had just arrived from Canada to play back-to-back shows in New York, wrapping up an international summer festival blitz. As a South Brooklyn native, it was a sight to behold: my American klezmorim friends had schlepped out to Little Odessa in 90-degree heat to party under the same roof as my Ukrainian, Moldovan, Russian, Jewish, Slavic, Soviet, post-Soviet, first-and-second generation immigrant neighbors.

Dobranotch is billed as a Russian musical collective playing a mix of traditional Jewish, Balkan, and so-called “Gypsy” tunes, but I’d say they defy classification. The night after the Brighton gig, they were featured in the New York Gypsy Festival at Drom in the East Village, where they played a dazzling concert that was distinct from the one before it not only in terms of audience, but program. While the Brighton concert catered to the nostalgia of Russian-speakers in Southern Brooklyn, incorporating songs from Soviet street and pop culture, the performance at Drom was distinctly “world” (to use the clumsy genre label), combining a dizzying variety of music traditions in a reckless and fun display of master showmanship. There, too, I was thrilled to see my ethnomusicologist friends mingle with my Jewish friends, my Sephardic pals boogie down with the Ashkenazim (between intermittent swigs of unspecified liquors).

Dobranotch is a party band in the traditional Eastern European sense, most in their element at raucous weddings and other heimish bacchanals—but to call Dobranotch “traditional” doesn’t quite fit the bill. While their repertoire features folk tunes spanning Russia to the Balkans and beyond, they are the ultimate crowd-pleasers, disregarding notions of appropriation and brazenly juxtaposing eclectic genres from far-flung regions and eras. A performance might feature a Cossack traditional segued into a Caucasian lezginka, followed by a potpourri of Odessan street music, Middle Eastern taksims, ample amounts of klezmer, and the occasional pop song thrown in for good measure. The effect is something of a pan-Eurasian pastiche, but one that reflects the band’s wide range of experiences traveling and living throughout Europe (not to mention excavating the depths of YouTube).

Dobranotch has come a long way since their founding two decades ago. What started as a small group of Russian expats experimenting with Celtic and Jewish music in France has since grown and amassed a sizeable following, filling out concert halls throughout Europe and raking in hundreds of thousands of YouTube hits with their quirky and understatedly hilarious videos. In 2015, the band became a viral sensation with their Yiddish cover of “Du Hast,” a klezmerized version of the famous Rammstein single. They’ve mastered the art of viral content, churning out video after video of unconventional performances, and they also participate in Russian meme culture: when the clock struck midnight in Moscow on September 3rd, Dobranotch dropped an impromptu cover of “Tret’e Sentyabrya” (“The Third of September”)—the Russian meme equivalent of “Careless Whisper”—on their Facebook page, to the delight of their 30,000+ followers.

The group is fronted by violinist and singer Mitia Khramtsov, a St. Petersburg native and veteran of the international klezmer scene. With his trademark beard and black fedora, Mitia has cultivated an iconic image as the face of Dobranotch. A highlight from the Drom concert was undoubtedly Mitia’s violin stunt, wherein he propped his bow up in surprising (read: uncouth) places and played a klezmer riff by sawing the violin against it with frenetic strokes. The band’s clarinetist, Ilya Gindin, also wowed the audience during a number called “From the Mill to the Train Station,” which involved disassembling his instrument in gradual increments between verses—a feat allegedly learned from Armenian wedding musicians.

Circus antics aside, the band’s musicianship was breathtaking. While the Brighton Beach show was pleasant in a down-home way, the serious flaunting of chops took place at Drom. Midway through the concert, Mitia introduced Georgian dancer Lea Elisha, who left the audience spellbound with her dervish-inspired revolutions, her floor-length skirt billowing out in a swirl of color. A multilingual encore drew the band from stage to floor, where they concluded the night with a spirited rendition of the famous 1989 Azeri hit “Bayatilar” surrounded by a crowd of ecstatic partygoers. It was a scene that could have taken place at a village wedding in the Southern Caucasus or Central Asia, Southeastern Europe, Bessarabia—or even New York City.

Samantha Shokin is a freelance writer and vocalist. She works at the Center for Traditional Music and Dance and is pursuing a Masters in Arts Administration.