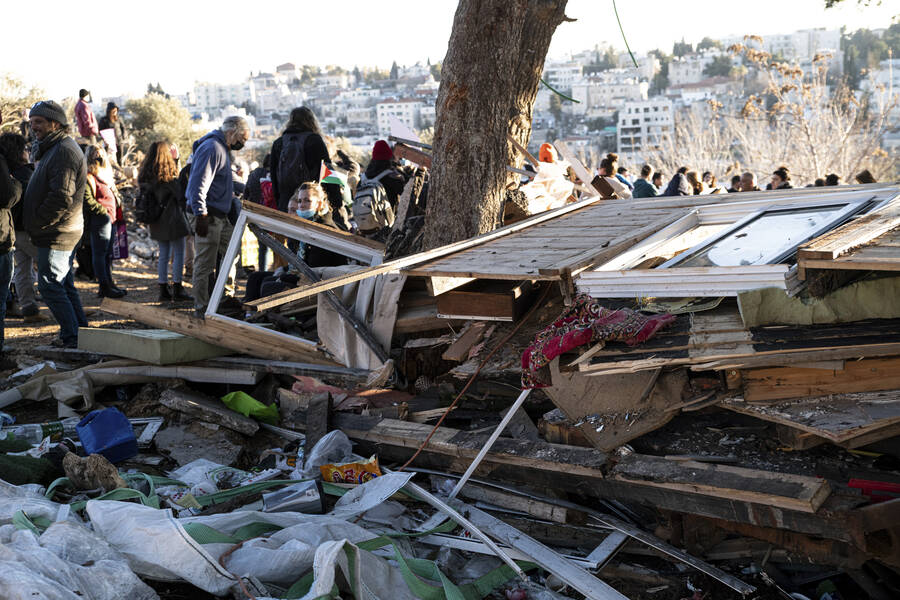 In May 2021, when the threat of forced expulsion of Palestinian families from the Sheikh Jarrah neighborhood of East Jerusalem kicked off a wave of Palestinian popular protest—followed by Israeli police crackdowns, Hamas rocket fire, and Israel’s brutal bombing of Gaza—politicians across the United States issued statements about the crisis. While the vast majority of members of Congress, especially on the Republican side but also among Democrats, condemned Hamas and had nothing to say about the injustice confronting Palestinians, an unprecedented number of elected progressives did call out Israel’s occupation and the intense violence that regularly enforces it.

Eight months later, Sheikh Jarrah’s ordeal remains ongoing. Last week, on January 19th, Israeli police violently expelled two branches of the Salhiye family from their homes before demolishing them to make way for a local school. (For historical background on the threatened expulsions in Sheikh Jarrah, you can revisit our answers to readers’ questions from last spring.) But even many of the Democrats who spoke out at the height of last year’s violence have been conspicuously silent on the brutal actions taking place in a country to which the US sends $3.8 billion annually in military aid. Only a handful of members of Congress—including frequent occupation critics Mark Pocan, Alexandria Ocasio-Cortez, Marie Newman, and Cori Bush and J-Street stalwarts Andy Levin and Jackie Speier, all of whom are Democrats—tweeted condemnations of Israel’s actions against the Salhiye family, which, The New York Times reported, marked at least the tenth instance of evictions or demolitions of Palestinian homes in East Jerusalem so far this month.

I directly reached out to the offices of 25 additional representatives and senators (with one exception, I excluded Republicans, given the party’s near-blanket disinterest in any kind of anti-occupation politics), including every single Democratic member of the Senate Foreign Relations committee; J Street-aligned politicians like Reps. Jan Schakowsky, Jamie Raskin, Alan Lowenthal, Ro Khanna, and Pramila Japayal, and Sens. Tammy Baldwin, Elizabeth Warren, and Dianne Feinstein; House Committee on Foreign Affairs leader Gregory Meeks; House Speaker Nancy Pelosi and Senate Majority Leader Chuck Schumer; and outspoken Israel advocates like Reps. Ritchie Torres and Debbie Wasserman Schultz. I also reached out to Republican Rep. Ann Wagner, who, along with Senate Foreign Relations Committee Democrat Cory Booker, is forming a new caucus to celebrate the Abraham Accords, the Trump administration-brokered peace agreement between Israel and several Arab states. Despite multiple days’ notice, with one last-minute exception, none of these members of Congress provided any kind of comment in response to my inquiries. (Just before this news bulletin went out, hours after deadline, Schumer’s office did send me a form response that appears to be intended for a constituent expressing opposition to aid to Israel, rather than a direct response to my inquiry on Sheikh Jarrah.)

This silence isn’t particularly surprising: The backlash that has become standard for any politician who speaks out against Israel disincentivizes criticism of the status quo. Even though mere statements would have limited if any effect, it’s still striking to observe how many elected Democrats are failing to make even symbolic efforts to criticize displacement of Palestinians, while remaining eager to profess their support for a two-state solution or to denounce nonviolent resistance efforts like the Boycott, Divestment, and Sanctions movement.

One of the few representatives to publicly oppose the demolition, Michigan’s Andy Levin, told me in an interview that he thinks speaking out is crucial because he sees the event in Sheikh Jarrah as part of a broad, concerted effort by the Israeli right to replace Palestinians with Jews in East Jerusalem and therefore make a divided capital—an essential feature of most two-state solution proposals—untenable. “There’s a purposeful campaign to make a two state solution impossible. The US standing by passively, not saying anything, not reaffirming our commitment to a two-state solution, adds momentum,” he said. “We have to respond to these things. It’s a fundamental violation of human rights to violently evict someone from their house like this.”

In his Twitter thread, Levin cited the Salhiye family’s expulsion as an argument for supporting the Two-State Solution Act, the J-Street-backed bill he and other co-sponsors announced last September. The bill would explicitly designate the West Bank, East Jerusalem, and Gaza as occupied territories—rebuking Trump-era efforts to obliterate distinctions between the occupied territories and Israel proper—and affirm that, under existing US law, military aid to Israel should be prohibited from being used to further occupation or potential annexation. This prohibition, Levin says, would extend to support for home demolitions like the one in Sheikh Jarrah. The bill has predictably been blasted by the right, which complains that it places conditions only on Israel and not the Palestinians, but it has also received criticism from the left. The US Campaign for Palestinian Rights (USCPR) argued in a memo that the act includes insufficient enforcement mechanisms for monitoring aid to Israel, fails to address Israel’s actions toward Gaza, and “returns U.S. policy to its status quo of stating opposition to the Israeli occupation while actively enabling it.” As an alternative, USCPR endorsed the Palestinian Children and Families Act, introduced last March by Rep. Betty McCollum, which the memo says includes stronger oversight mechanisms for restricting the use of aid to Israel. (Both McCollum’s and Levin’s bills are extremely unlikely to pass.) Rep. Jackie Speier, in her tweet about the Salhiye eviction, noted she is proud to co-sponsor the McCollum bill. Levin has not co-sponsored the McCollum bill, though J Street has endorsed it.

When pressed on criticisms of the bill from groups like USCPR, Levin said, “I’d say the purpose of this bill is to reaffirm a two-state solution as the way that we can achieve Palestinian political human rights and achieve peace and security for Israel. There are some people who don’t believe in a two-state solution in particular, and I would say to friends on all sides that the way forward must be through dialogue and achieving the rights of both peoples.”