Biden’s Israel trip didn’t accomplish much, but it symbolized the increasingly passive US role in the region. 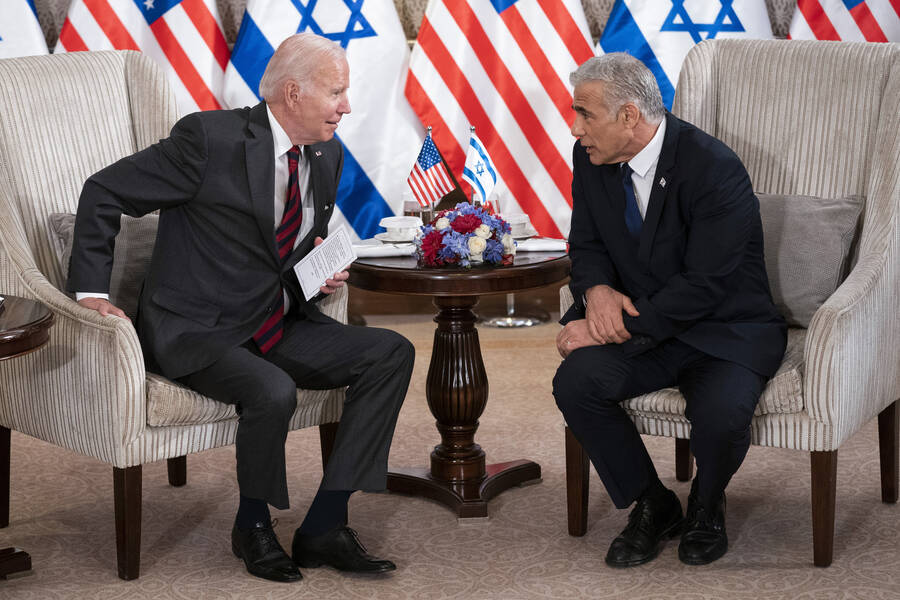 DAZED AND DISORIENTED in his public appearances, President Joe Biden has often seemed to embody American decline, and that was certainly the case during his two-day visit to Israel last week. Israeli media zeroed in on Biden’s low approval ratings and seized on the fractiousness and instability of domestic American politics. Beneath the surface-level pomp with which the Israeli government received Biden—the general enthusiasm about warming ties between Israel and Saudi Arabia, and about the success of the Trump administration’s “Abraham Accords” normalizing relations between Israel and several Arab governments—there was also a certain anxiety. From the beginning, the Biden administration has telegraphed a disinterest in the Middle East and expended little energy on articulating a detailed vision for the region, especially when it comes to Israel/Palestine; Biden is the first US president in more than two decades to lack any peace proposal, even an aspirational one. What, then, might it mean if the current US hiatus from leadership in the region becomes permanent?

Of course, the US withdrawal from the Middle East did not begin with Biden. Over the last half-decade, the United States has gradually decreased its active military presence there, and the amount of attention paid by policymakers in Washington has decreased with it. This has been a bipartisan policy commitment, part of a broader strategic reorientation toward a burgeoning great power conflict with China and, more recently, with Russia. In the fall of 2019, Donald Trump ordered the withdrawal of US troops from Syria. In August 2021, the last US troops left Afghanistan in a chaotic and ill-managed evacuation. In December 2021, Biden declared the end of the US combat mission in Iraq, marking ten years since US forces began their withdrawal under Barack Obama in 2011. While small numbers of US soldiers remain in all three countries, the purview of their activities is much narrower than it once was.

Although the idea for a broad US-backed military alliance among Middle Eastern countries—even talk of an “Arab NATO”—is not new, it has taken on new significance against the backdrop of the reduced US military footprint in the region. Last month, Israeli Defense Minister Benny Gantz announced that Israel is building an air defense alliance aimed at combating Iran, to include Saudi Arabia, Qatar, Egypt, the United Arab Emirates, Bahrain, and Jordan. “The idea goes all the way back to Condoleezza Rice,” explained Ksenia Svetlova, a senior non-resident fellow at the Atlantic Council and a former member of the Knesset. While the US cannot maintain the troop levels it once had in the Middle East, Svetlova continued, “Biden understands that it would be impossible for the US to totally leave, and that the vacuum would be filled by other rival powers.” Put differently, the deepening cooperation between Israel and the Arab Gulf states is a near-term strategy for the managed decline of the US empire.

Indeed, for some on the Israeli right, the broader framework for understanding the heightened collaboration between Israel and a growing number of Arab states is “the declining stature of the United States in world affairs,” as Yossi Shain, a member of Knesset from Yisrael Beiteinu, told me. “The alliance between Israel and the Emiratis, for example, or with Morocco, hopefully now with Saudi Arabia,” Shain said, shows that “people now understand they need to hang on each other” in the absence of a more robust US presence in the region. To be sure, the US has not ceased to play a role there; it has been both the financial underwriter and mediator in the diplomatic and military initiatives shared between Israel and the Gulf states. But what Biden’s visit signaled, Shain said, “was a shift in American foreign affairs.” With the possibility of a Republican presidential victory in 2024, whether by Trump or another candidate, there is little expectation—in Israel, as well as in the Gulf states—that the US will return to articulating a more comprehensive, ambitious moral vision for the region.

During Biden’s visit, this lack of vision was felt most palpably on the issue of Israel’s military rule over the West Bank and ongoing siege of Gaza. The president made only a few tepid rhetorical nods to the two-state solution—“even though I know it’s not in the near-term,” he said. Biden did not call directly on Israel to return to negotiations with the Palestinians, and he made no mention of Israeli settlements during his time in Israel. “As a member of the peace camp, I would’ve appreciated if there was any kind of roadmap, any kind of vision for the future,” Svetlova told me. “I understand the sensitivity and the desire not to put pressure on the current administration,” she added, referring to the caretaker government currently headed by the centrist Yair Lapid, who faces a tough electoral battle with former Prime Minister Benjamin Netanyahu of the right-wing Likud Party in November. “But it’s a shame that nothing was said,” Svetlova added, about the need to restart the peace process. It has been eight years since Israeli and Palestinian leaders last sat around the negotiation table: the longest stretch of time since before the start of the Oslo talks in the 1990s.

Yet Biden’s blank check to the Israeli government and his bromides about the “bone deep” connection between the US and Israel reflected much less a break with US policy than “an unmasking,” Hagai El-Ad, the executive director of the Israeli human rights organization B’Tselem, stressed. “And there is value in unmasking.” Biden’s approach to Israel is “a continuation” of Trump’s, El-Ad said. Like his predecessor, Biden has no interest in holding Israel accountable for its violations of international law. Unconditional support for the Israeli policies that B’Tselem describes as apartheid has long been the US norm. “But it’s not about the previous or the next administration,” El-Ad told me. “It is so much easier to kick the can down the road with the empty rhetoric of two states.” If there is any upside to Biden’s fundamental lack of interest in putting pressure on the Israeli government, El-Ad said, it’s that it will illuminate to the broader public that “this is where the US stands.”

Still, for anti-occupation and Palestine solidarity activists, the shift in US policy in the Middle East toward a more passive mode of status-quo maintenance presents a real challenge. Disengagement from any semblance of a peace process is unlikely to translate into the US placing conditions on aid to Israel; this would, in fact, demand the investment of greater political energy, not less. And while public opinion in the US is slowly becoming more critical of Israel and more attuned to the apartheid reality on the ground, “it’s a long trajectory between public opinion shifting and shifting policy,” El-Ad said. “That doesn’t diminish how important that trajectory is.”

For the Israeli left and human rights advocates, it was long an article of faith that the international community would eventually coalesce to pressure Israel into ending the occupation and withdrawing to its pre-1967 boundaries. Now, however, the chances of any such pressure materializing in the foreseeable future are slim. With the Abraham Accords and military cooperation, the Gulf states and other Arab governments have demonstrated their willingness to ignore the issue of Palestinian rights in exchange for advanced weapons technology. In Europe, the war in Ukraine has eclipsed almost any other issue. In the US, each passing week seems to deepen the crisis of democracy. The occupation continues, and the world looks away.