A Night of Violence in Jerusalem

An emboldened extreme right interrupts Ramadan with a show of force. 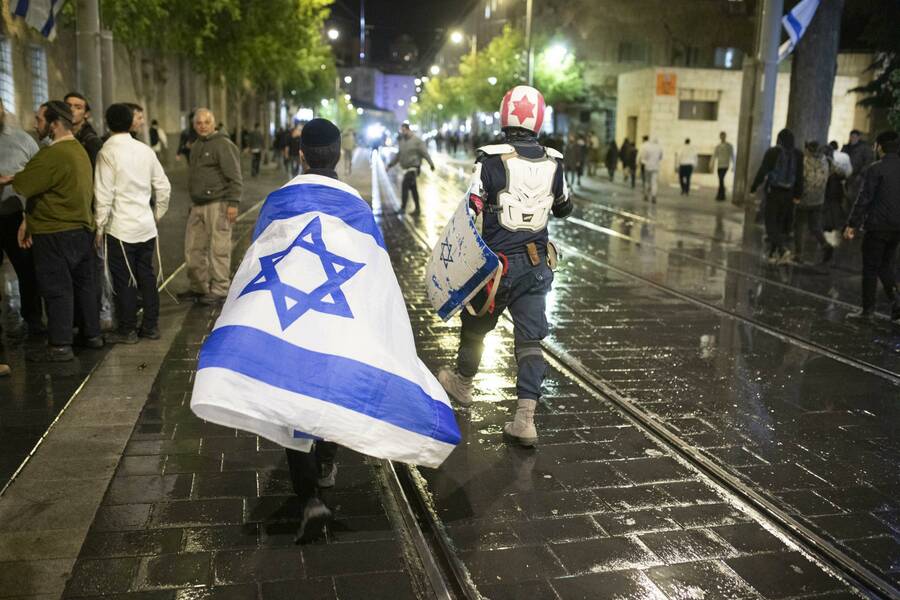 ON THURSDAY NIGHT in Jerusalem, in the middle of Ramadan, a crowd of several hundred far-right Jewish demonstrators marched from the city center toward the Damascus Gate, at the entrance to the Old City. They chanted “death to the Arabs” and “may your village burn.”

Photojournalist Oren Ziv, a staff photographer for +972 Magazine and co-founder of the Activestills collective, covered the protests, capturing images of violence and fear as unsettling as they are sadly familiar.

The march was organized by Lehava, an anti-Arab and “anti-assimilation” group led by Benzi Gopstein, an adherent of the Jewish supremacist rabbi Meir Kahane and a leader of the Kahanist movement in Israel. Lehava had called for a “demonstration of national dignity” in response to several videos circulating on TikTok that showed Palestinian youths attacking Orthodox Jews in Jerusalem. “Jews should not be afraid to walk in Jerusalem,” the group’s posters declared. Yet the TikTok videos themselves appeared against the backdrop of intense Israeli police repression in the area around the Damascus Gate, typically a place for gatherings during Ramadan. Over the last week, Israeli police have prevented Palestinians from celebrating the holiday there, often using stun grenades and “skunk” water against Palestinian worshippers and passersby.

There is little doubt the Israeli extreme right feels emboldened after the recent election of its representatives to the Knesset. In 2019, Israel’s High Court barred Gopstein and another Kahanist leader, Baruch Marzel, from running for the Knesset on the grounds that they had engaged in racist incitement to violence. But their supremacist party, Otzma Yehudit (Jewish Power), has continued to run in elections, and in March 2021, its leader Itamar Ben-Gvir was elected to the Knesset. Prime Minister Netanyahu, who is counting on Ben-Gvir’s backing to form a governing coalition, has encouraged right-wing voters to support Otzma Yehudit.

The violence began on Thursday night even before the far-right demonstrators arrived. At around 8:00 pm, police closed the Damascus Gate in anticipation of the march, ordering shops and food stands to close and dispersing Palestinian children, families, and eldery people. Those who refused to leave were arrested, or hit with “skunk” water and stun grenades. Video taken by journalists also shows Israeli forces firing rubber-coated bullets at Palestinian counterprotesters. After gathering in the city center, the far-right demonstrations departed at 10:00 pm, marching through central Jerusalem, and by 10:15 their chants could be heard by Palestinians near the Damascus Gate. Eventually, using water cannons, Israeli police pushed the marchers back toward the city center.

In the days before the march, leaked messages from Whatsapp groups showed far-right Jewish extremists planning violence against Palestinians and calling for a lynching. Across Jerusalem, groups of far-right demonstrators marauded through the streets looking for Palestinians to attack. Graphic videos of Israeli Jews attacking Palestinians and Palestinians attacking Jews have continued to circulate on Hebrew and Arab-language social media. Haaretz reports that dozens of Palestinians have been hospitalized, mainly for injuries caused by Israeli rubber-coated bullets. On Friday morning, Israeli Internal Security Minister Amir Ohana released a statement condemning “attacks by Arabs.” He made no mention of violence committed by Jews.

Oren Ziv, born in 1985, is a co-founder of Activestills Collective. Since 2005, he has been documenting social and political issues in Israel and in the Palestinian territories.