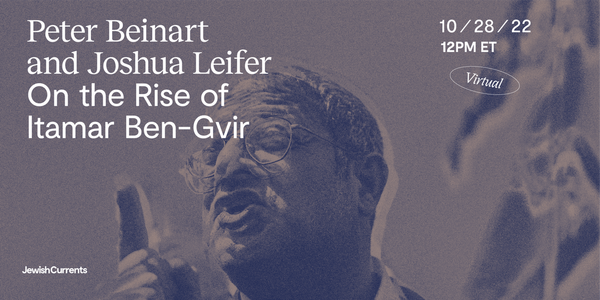 Jewish Currents editor-at-large Peter Beinart speaks with Joshua Leifer, a contributing editor at Jewish Currents, about his latest piece on Itamar Ben-Gvir, the Kahanist whose openly racist party could win as many as 14 seats in November’s Israeli elections. Josh will talk about Kahanism’s new appeal, Ben-Gvir’s alliance with Benjamin Netanyahu, and why American Jewry’s most powerful organizations are staying silent.

Peter Beinart teaches national reporting and opinion writing at the Newmark J-School and political science at the CUNY Graduate Center. He is editor-at-large for Jewish Currents, an MSNBC political commentator, and a fellow at the Foundation for Middle East Peace. He writes the weekly Beinart Notebook newsletter on Substack.