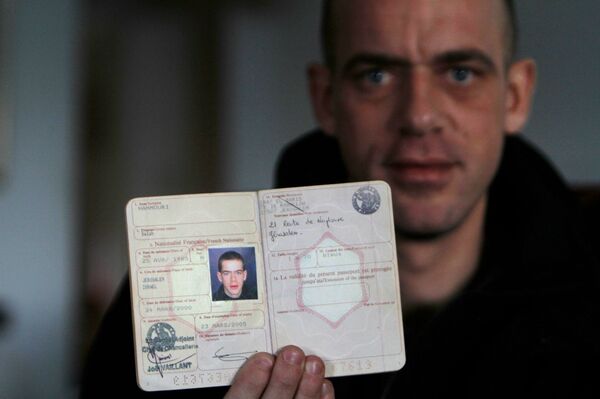 Salah Hammouri shows his French passport during an interview with Reuters in the West Bank neighborhood of Dahiyet al-Barid, December 19th, 2011.

On September 4th, an Israeli military commander extended the detention of 37-year-old Palestinian French human rights advocate Salah Hammouri for another three months without charge or trial, a type of imprisonment known as “administrative detention.” While the commander’s detention order will be reviewed by a military judge, the request is virtually guaranteed to be approved given the deference most military judges show to commanders. Hammouri, one of over 700 current Palestinian administrative detainees, is a human rights lawyer for the Palestinian prisoner advocacy group Addameer, one of the six human rights organizations Israel declared to be “terrorist” groups last October. Israeli authorities have detained Hammouri for the past six months on suspicion of his involvement with the Popular Front for the Liberation of Palestine (PFLP), a leftist Palestinian political faction (with an armed wing) that is outlawed as a terror group by Israel. An IDF spokesperson told Jewish Currents that Hammouri poses a “risk” to “the security of the region.” However, since Hammouri’s lawyers are barred from viewing the evidence Israeli military commanders present to an Israeli military judge in administrative detention proceedings, the exact reason for his detention is unknown.

In addition to administrative detention, Hammouri is facing the prospect of deportation to France following Israel’s October 2021 decision to revoke his Jerusalem residency rights on the grounds that, in violation of a 2018 law passed by the Israeli Knesset, Hammouri committed a “breach of allegiance” to Israel because of his alleged involvement with a terrorist group. Hammouri’s case brings together several repressive policies that typically play out in separate cases: Israel’s punishment of human rights workers, its widespread use of administrative detention, and its ongoing attempts to “Judaize” Jerusalem.

“They’re silencing him,” said Milena Ansari, the international advocacy officer for Addameer. “It’s all part of putting pressure on him in order to end any hope for him to live freely in Jerusalem.” Last month, Human Rights Watch called on Israel to free Hammouri. Amnesty International has also repeatedly demanded his freedom, calling his imprisonment an attempt to “muzzle his work on human rights.”

Hammouri has been in and out of prison since Israeli forces first arrested him in September 2001 for participating in student activism and for spray-painting slogans on walls during the Second Intifada. His most prolonged stint in detention was in 2005, when he was convicted and sentenced to seven years in prison for involvement in an alleged plot to kill Rabbi Ovadia Yosef, the spiritual leader of Israel’s right-wing Shas party. (In April 2011, in a letter to a French senator, then-French Foreign Minister Alain Juppé said the case against Hammouri lacked strong evidence.) Israeli authorities released Hammouri in December 2011 as part of the prisoner swap deal to secure the freedom of Gilad Shalit, the Israeli soldier captured by Hamas and held in Gaza for over five years. Since then, Hammouri has been imprisoned two more times, including a stint in administrative detention from August 2017 to September 2018.

When he was most recently detained in March, Hammouri was initially held in a military prison in the West Bank, but was transferred to Hadarim, a prison northeast of Tel Aviv, in July—a move advocates suspect was retaliation for publishing a letter to French President Emmanuel Macron calling on France to pressure Israel to release him.

The targeting of Hammouri has extended beyond repeated imprisonment and administrative detention; it has also incorporated Israeli-made spyware. Last November, the Dublin-based human rights group Front Line Defenders discovered Hammouri and five other Palestinian human rights defenders’ mobile phones were hacked using Pegasus software, which is made by the Israeli company NSO Group and designed to capture its targets’ personal contacts, messages, and phone calls. In April of this year, Hammouri sued NSO Group in France, alleging that the company illegally infiltrated his phone. Moreover, in 2016, Hammouri’s wife, a French woman named Elsa Lefort, was denied entry to Israel and deported to France, forcing Hammouri to travel to France every few months to see his wife and son.

The revocation of Hammouri’s residency rights in Jerusalem continues his punishment, this time building on Israel’s longstanding effort to limit the number of Palestinians who can reside in Jerusalem. After Israel annexed East Jerusalem in 1967, Israeli authorities did not automatically grant Palestinians in the area citizenship. Instead, they were made “permanent residents,” giving them access to Israeli healthcare and social services and the option to apply for Israeli citizenship—though most Palestinians refused to do so, and even of those who applied, few have actually obtained citizenship. Palestinians’ permanent residency status in Jerusalem, however, is tenuous: Since the occupation began, Israeli authorities have stripped over 14,500 Palestinians of their residency rights as part of Israel’s policy to maintain “a solid Jewish majority in the city.”

In 2018, the Knesset gave Israeli authorities a new tool with which to target the residency rights of Palestinians in Jerusalem, passing a law that gave the Ministry of Interior the authority to revoke the residency rights of anyone found to have committed a “breach of allegiance” to Israel. Three years later, the Ministry of Interior used this law to revoke Hammouri’s residency rights. Like the evidence in administrative detention hearings, the evidence behind the “breach of allegiance” allegation is secret and thus difficult to legally challenge. A challenge to Hammouri’s residency revocation is set to be heard by the Israeli High Court next year.

Hammouri is not the first human rights advocate who Israel has sought to deport. In 2019, Israel deported Human Rights Watch Israel and Palestine Director Omar Shakir from Israel on the grounds that he violated a 2017 law that bans entry to those who support the Boycott, Divestment, and Sanctions movement targeting Israel. The expulsion of Shakir, and the potential deportation of Hammouri, emerge “from the same underlying context, where the Israeli government is methodically seeking to muzzle voices that challenge its apartheid over Palestinians,” said Shakir. The key difference between the two cases is that Hammouri is not a foreign national on a work visa—he is a Palestinian under military occupation, and his deportation from occupied territory would be a violation of international law.

Israel has long used deportation as a way to punish Palestinians. Notoriously, in 1992, Israel deported 415 Palestinians to Lebanon in retaliation for Palestinian attacks that killed several Israeli security personnel. While Israel has not deported so many Palestinians at once since then, Israeli authorities have at times deported individual Palestinians, mainly from the West Bank to Gaza. In May, then-Prime Minister Naftali Bennett instructed his security cabinet to examine the option of deporting the families of Palestinian attackers to Gaza, though the policy was never enacted. Far-right Israeli Member of Knesset Itamar Ben Gvir, who could be part of the next Israeli cabinet following Israel’s upcoming November elections, wants to expand the use of deportation, calling for the expulsion of those who are “disloyal” to the state.

For now, Hammouri remains in Israeli-controlled territory, in a military jail. The earliest he could be released from administrative detention is December, though the Israeli military could decide to renew his detention again. But his release would not resolve the threat to his right to live in Jerusalem. “If they did not renew the administrative detention,” said Jessica Montell, the executive director of HaMoked, a human rights group representing Hammouri in his residency case, “the fear [is] that he would just be taken to the airport and put on a plane to France.”

That prospect worries Hammouri greatly. “The occupation doesn’t stop at killing, detaining, and displacing us,” Hammouri said as part of a Center for Constitutional Rights submission urging the International Criminal Court to move toward issuing arrest warrants for Israeli officials accused of war crimes. “It persecutes our dreams and assassinates them. The uncertainty of where I may end up, once I am freed, is a tornado of thoughts chasing me daily. It affects my morale, and my psychological state is like being on a roller coaster.” 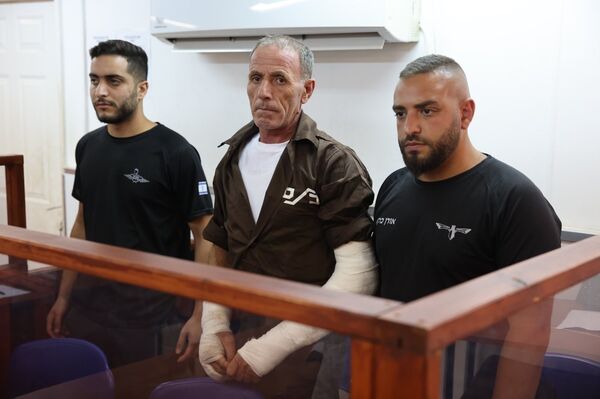 On September 19th, 2022, an Israeli judge at Ofer military court extended the detention of Hafez Hureini, who was attacked by five armed settlers on his land in At-Tuwani one week ago. Since the attack, he has been held in military prison with two broken arms. The judge reduced his charge from attempted murder to aggravated assault, and extended his detention for three more days. Photo by Oren Ziv/Activestills.