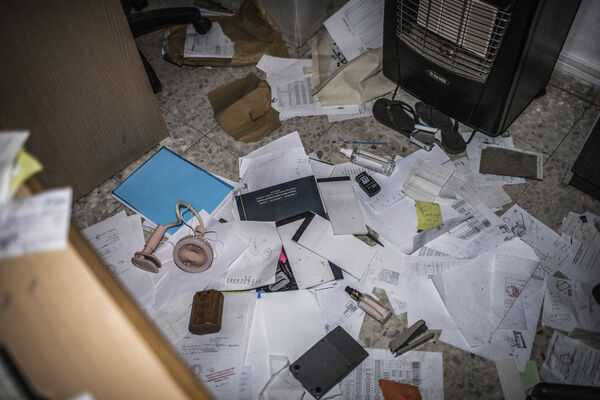 A view inside the Union of Palestinian Women’s Committees (UPWC) office, after it was raided by Israeli Military forces, Ramallah, West Bank, August 18th, 2022.

In the early morning hours of August 7th, Israeli troops stormed the offices of seven Palestinian human rights organizations in the occupied West Bank, confiscated their documents and computers, welded their office doors shut, and left behind military orders declaring the groups illegal and barring them from operating.

The raids, which represent a sharp escalation of Israel’s assault on Palestinian civil society, drew dissent from nine European governments, who in a joint statement Friday called Israel’s actions “not acceptable” and “part of a worrying reduction of space for civil society in the occupied Palestinian territories.” But the response from the United States has been more muted—and according to some human rights advocates, that passivity has emboldened Israel to escalate its crackdown.

While Price’s comments were skeptical of Israel’s actions, some human rights advocates said that, since Israel’s October declaration that six of the raided Palestinian human rights groups were “terrorist” organizations, the US response to Israel’s attack on civil society has been inadequate. “There was no public condemnation of the actions, and I think this has allowed the escalation to move forward,” said Avner Gvaryahu, the executive director of Breaking the Silence, a group of Israeli army veterans that exposes the human rights abuses of Israel’s occupation. “This is a very dark stain on the Biden administration.” On Tuesday, 47 civil society groups in Israel, including Breaking the Silence, put out a joint statement calling for more international pressure on Israel to revoke its decision to target Palestinian civil society groups.

Last October, Israeli Defense Minister Benny Gantz declared that six of the leading Palestinian human rights organizations were “terrorist” groups and fronts for the Popular Front for the Liberation of Palestine (PFLP), a leftist Palestinian political party with an armed wing. He claimed that the groups, which receive significant funding from European governments, used donor money to support the PFLP, which appears on the European Union terrorist list. The groups in question deal with issues ranging from the rights of Palestinian children to farmers’ struggles against Israeli settler encroachment. (A seventh raided group, the Health Works Committees, which runs hospitals and health clinics in the West Bank, was declared an illegal terrorist group separately in 2020.)

In the immediate aftermath of Gantz’s declaration, the State Department said it was seeking clarification from Israel, and that the US believes that a “strong civil society” is “critically important to responsible and responsive governance.” The EU, meanwhile, said that it too wanted more information, but that past allegations of misuse of funds by Palestinian groups were never substantiated. In May 2021, the EU froze funding to Al-Haq, an organization that documents Israeli and Palestinian Authority rights abuses, as it reviewed allegations that funds donated to the human rights group were transferred to the PFLP.

Meanwhile, Israel got to work trying to justify the extraordinary terror designations. Israeli officials gave European and American officials a dossier aiming to corroborate alleged links between the PFLP and the seven designated human rights organizations. But according to joint reporting by The Intercept, +972 Magazine, and Local Call, the dossier “shows no concrete evidence of involvement in violent activities by any of the groups.” Privately, the CIA reportedly agreed that Israel’s evidence did not justify Gantz’s claims, according to a Guardian report by Jewish Currents Contributing Writer Isaac Scher revealing that the intelligence agency “was unable to find any evidence to support Israel’s decision to label six prominent Palestinian NGOs as ‘terrorist organizations.’” Florida Rep. Ted Deutch, a Democrat and a staunch supporter of Israel, likewise told an Israeli delegation sent to burnish Gantz’s declaration that the evidence it presented was “insufficient,” according to The Guardian. Publicly, however, the State Department stuck to its line that it was continuing to review the information Israel had furnished.

“If the administration agreed with the Israeli claims, they would have said so. The fact that they haven’t tells you all you need to know about the US assessment of these designations,” said Matt Duss, the foreign policy advisor to Sen. Bernie Sanders. “But the Israeli government doesn’t necessarily need the US’s agreement, just its silence. They just need the administration to do nothing. And unfortunately that’s what they’re getting.”

Aside from a handful of Democrats in Congress, 22 of whom sent a letter in July to the State Department expressing concern that Israel’s actions were meant to “criminalize and silence prominent and essential Palestinian human rights organizations” and demanding the US publicly reject Israel’s terror designation, the vast majority of lawmakers followed the State Department’s lead in not condemning Israel’s targeting of Palestinian civil society. “In some ways, Congress did the same thing the administration did. They were shown evidence, they were clearly pressed by Israel to join in and support this, and they decided, ‘there isn’t enough evidence,’” said Lara Friedman, the president of the Foundation for Middle East Peace. “But most of them didn’t decide to say anything to defend the right of NGOs to exist and operate.”

Last month, the EU concluded its assessment of Israel’s claims and decided that they weren’t corroborated. A joint statement from nine European countries said they had seen “no substantial evidence” to back up Israel’s allegations. The Israeli army raids took place about a month later. Sahar Francis, the head of Addameer—a group that advocates for Palestinian prisoners and one of the seven targeted NGOs—said the timing was no coincidence. The EU statement was “problematic for the Israeli side. Maybe for the first time, no one takes their secret information for granted as accurate,” she told Jewish Currents. Francis believes that Israel subsequently raided her group and the six others to send a message to Europe that Israel will continue its campaign against Palestinian civil society, regardless of the EU response.

Another development that may have impacted the timing of Israel’s raids was the reported progress over the past week between Western states and Iran over the Islamic Republic’s nuclear program, according to Yousef Munayyer, a non-resident senior fellow at the Arab Center Washington DC. Israel “feels that the United States owes them one,” said Munayyer, referring to the return to negotiations with Iran over Israel’s objections, and that the US “really should not be criticizing them for anything they’re doing.”

Human rights advocates fear that, absent strong international action against Israel, the attacks on Palestinian human rights groups will only get worse. “It doesn’t seem that things will de-escalate anytime soon,” said Brad Parker, Senior Adviser on Policy and Advocacy for DCIP. “There’s a very real chance that the next step is bank accounts being frozen, and arrests and detentions of staff and directors.”

On Sunday, three days after the military raids, two directors of the targeted Palestinian groups—Khaled Quzmar of Defense for Children International-Palestine (DCIP) and Shawan Jabarin of Al Haq—were summoned for interrogation by Israel’s Shin Bet intelligence agency. Jabarin refused to come in for an interrogation, publicly daring officials to come and arrest him in person, while Shin Bet agents detained Quzmar for about two hours before releasing him. 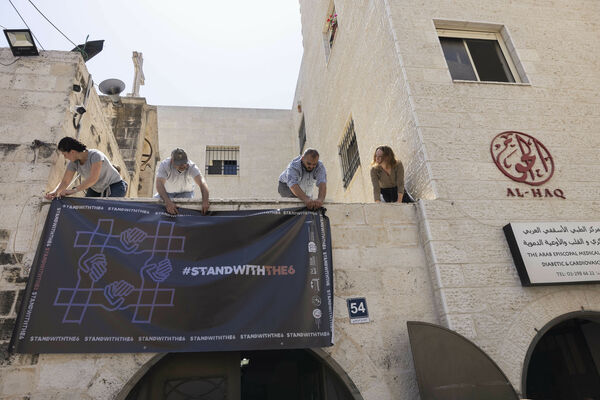 Representatives of Palestinian civil society groups and supporters gathered in front of Al Haq’s office to protest against Israel’s military raids targeting Palestinian human rights groups on August 18th. During the raids, computers and other equipment were taken by Israeli military forces and metal doors were sealed with notices on them that the organizations are outlawed and are closed. Photo by Oren Ziv/Activestills.