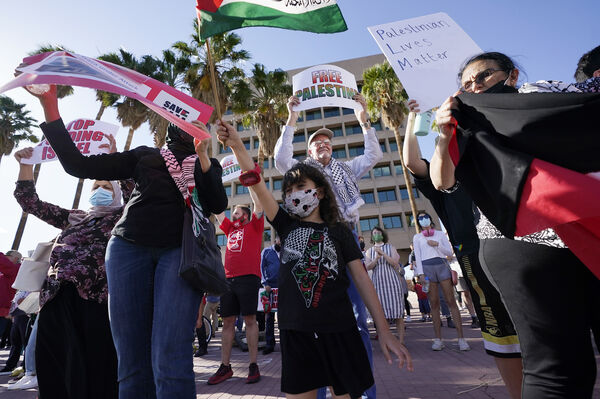 People gather to protest for the Palestinian people in the ongoing Middle East conflict between the Palestinians and Israelis during a rally on May 17th, 2021, in Tucson, Arizona.

(note: Senior Reporter Alex Kane is on parental leave; this is a guest post from Jewish Currents contributor Isaac Scher)

Yesterday, Arizona’s Republican Gov. Doug Ducey signed legislation codifying the International Holocaust Remembrance Alliance’s definition of antisemitism. It is the second time in as many years that Arizona’s Republican legislature has sought to incorporate the IHRA definition, described by critics as suppressing pro-Palestine advocacy, into its criminal law. The first time, in 2020, the ACLU opposed the bill for rendering some statements critical of Israel “as evidence of . . . hate crimes, including many statements clearly protected by the First Amendment.” Faced with significant opposition, the bill foundered.

Over the past several months, however, seemingly nobody knew that Arizona was trying again. In February, the House of Representatives introduced a bill concerning the “right to jury” and the “parent-child relationship.” A month later, the Senate bowdlerized and rewrote the bill to place the IHRA definition into criminal statutes. It returned to the House, where it passed with 82% support, and then moved to the governor’s office. “They moved it this year by stealth,” said Lara Friedman, president of the Foundation for Middle East Peace (FMEP) and a Jewish Currents contributing writer.

Across the country, states are continuing to incorporate the IHRA definition into their legal codes and policies—as well as, in some cases, the IHRA’s “contemporary examples of antisemitism,” several of which squarely preclude strong criticisms of Israel. In March, Iowa incorporated the definition into its civil rights act, so that “discriminatory acts” might be easily scrutinized for possible “antisemitic intent.” On April 14th, the Tennessee legislature unanimously voted in favor of legislation requiring public schools to use the definition in “determining if an alleged act was motivated by an antisemitic intent.” Since the beginning of the year, six state governors have issued proclamations endorsing the definition, according to analysis from FMEP. Proclamations are non-binding, but for proponents of Israel, they lend authority to the definition, Friedman said. Through piecemeal legal efforts, states are hemming the bounds of legitimate discourse on Israel, Zionism, and Judaism. In classrooms, at workplaces, and on the streets, pro-Palestinian advocacy is being pushed to the edge of permissibility.

In Arizona, antisemitism as defined by the IHRA will inform the charging and sentencing of people accused of crimes. The legislation could render a pro-Palestinian protester, swept up and arrested by police, eligible for hate crimes for carrying a Palestinian flag. “This is not legislation that makes it a hate crime to criticize Israel,” Friedman said. “It is legislation mandating that the IHRA definition becomes one of the considerations taken into account when looking into whether or not a crime committed has a hate crime component.” The legislation could enhance a defendant’s punishment, should they be found to have crossed the IHRA’s line on antisemitism. Courts will be required to use the IHRA definition when considering aggravating factors in criminal convictions. Pro-Palestinian activists could face higher sentences than other kinds of political activists, according to Meera Shah, an attorney at Palestine Legal.

Tennessee’s legislation cracks down on so-called antisemitism in public schools, from kindergarten through higher education, by incorporating the IHRA definition into applicable anti-discrimination laws. In part, it prohibits instructors from teaching concepts defined as antisemitic. Given the IHRA definition’s conflation of Zionism and Judaism, it may prevent students from learning of Israel’s history of violence against Palestinians. “This is particularly troubling in the educational sphere,” Kenneth Stern, a lead drafter of the IHRA definition who has since protested its incorporation into law and now directs Bard College’s Center for the Study of Hate, said. “It constrains what can be taught and said.”

Iowa’s legislation is the broadest of the three, adding antisemitism as defined by IHRA to the state’s civil rights act. “It encompasses campuses and schools, but also workplace discrimination and public accommodations,” Shah said. “It puts administrators in the position of being government censors, having to determine whether speech runs afoul of the new law. In thinking about approving campus events, or adjudicating disputes between student groups or between students, or adjudicating complaints on campuses, that’s where we see the real potential for harm.”

Proponents of the legislation say it simplifies the state’s work of investigating antisemitism. “Jewish identity is multifaceted,” Mark Goldfeder, a senior lecturer at Emory University’s Center for the Study of Law and Religion, told Jewish Currents. “Without a standard definition for authorities to reference, it is too easy for antisemites to hide behind this ambiguity, commit heinous acts with impunity, [and] then claim it was not antisemitism.” He described antisemitism as a little-known hatred, citing a recent study that found that nearly half of all Americans have either never heard of the word or don’t know what it means; codifying IHRA, he said, is “a way of educating others about what antisemitism is, and how Jews today experience it.”

Detractors find little educational utility in codifying the definition. “Enshrining the definition into law, for either education or hate crimes, prioritizes a certain politics,” Stern said. “Is it antisemitic for a Palestinian student to say that they don’t think Israel should exist? As much as I disagree with the merits, are you going to require that this be looked at as a possible violation of the law?” Beyond the chilling effect of codifying the definition for students, activists, and teachers, the legislation targets Palestinian accounts of life under the Israeli regime, Shah said, even as Israel’s own legal system establishes Jewish supremacy from the Jordan River to the Mediterranean Sea. “It affects the ability of Palestinians to narrate their own history,” she said, “and to speak about their experiences of dispossession.” The emerging patchwork of laws and policies codifying the IHRA definition may produce a second dispossession—of the right to speak about Israel’s violence at all. 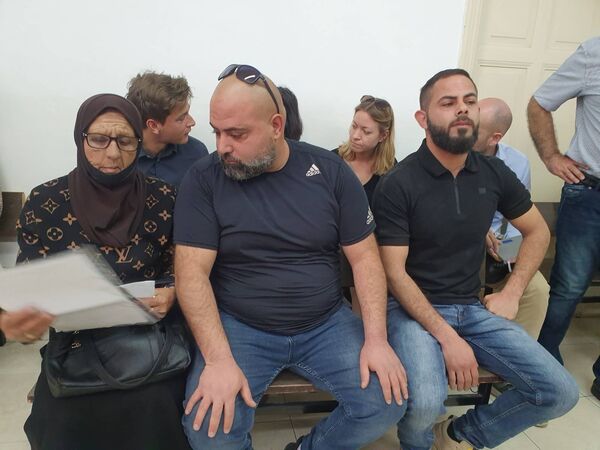 Palestinians and Israeli activists hold a vigil in front of the Jerusalem Magistrate Court, on April 25th, during a hearing on whether to expel the Salem family from the Sheikh Jarrah neighborhood, in occupied East Jerusalem. The judge would conclude the hearing by ruling that the case must be reheard, forestalling the expulsion for at least two months.