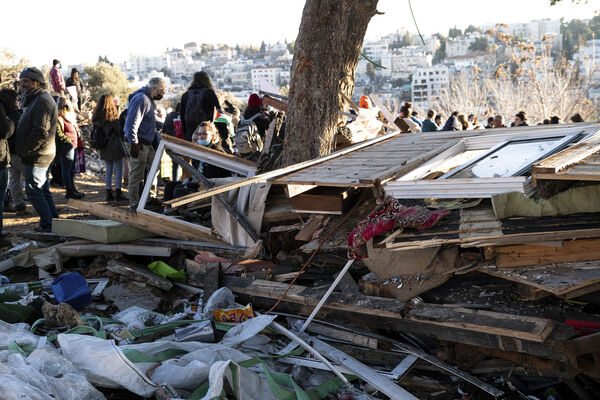 Last Tuesday, Amnesty International, one of the most prominent human rights groups in the world, published a report with a blunt conclusion: Israel maintains an apartheid regime prohibited by international law in the land between the Jordan River and the Mediterranean Sea. Following a similar Human Rights Watch report from April 2021, Amnesty became the second major human rights organization to use the term “apartheid” in reference to Israel. Both reports name as apartheid the system of control Israel enacts over Palestinians—one in which there are two separate legal regimes for Palestinians and Israeli Jews in the occupied territories, accompanied by the denial of rights to Palestinian refugees on the basis of their ethnicity, as well as widespread discrimination against Palestinian citizens of Israel.

The report drew reactions and extensive media coverage from around the world. The Israeli government blasted Amnesty for engaging in “modern antisemitism,” while the Palestinian BDS National Committee welcomed the report as an important recognition of the brutal, unequal reality Palestinians live under.

To answer some of the most common questions the Amnesty report has generated, I put together this brief explainer.

How did Amnesty International reach its conclusions?

Contrary to what many may think upon hearing the word “apartheid,” Amnesty’s report does not say Israel maintains the same legal regime that characterized South African apartheid, which ended in the early 1990s. Instead, Amnesty relies on the international legal definition of “apartheid,” which was laid out in 1998 as part of the Rome Statute, the treaty that established the International Criminal Court. (Apartheid was also proscribed earlier, in the 1965 International Convention on the Elimination of All Forms of Racial Discrimination and the 1973 Apartheid Convention, but Amnesty used the Rome Statute for its report because it is more “stringent,” and best reflects how apartheid is “a crime against humanity under customary international law.”) The international legal definition was influenced by how South Africa instituted apartheid, but can also be applied to analogous systems in other countries; for instance, in 2017, Amnesty accused Myanmar of commiting the crime of apartheid against its Rohingya Muslim minority. Under the Rome definition, apartheid is characterized as “inhumane acts” committed “in the context of an institutionalized regime of systematic oppression and domination by one racial group over any other racial group or groups and committed with the intention of maintaining that regime.”

Amnesty takes that definition and applies it directly to Israel’s rule over Palestinians. The Amnesty report explains how Israel oppresses and dominates Palestinians, how that oppression is designed to benefit one racial group (Israeli Jews) over another (Palestinians), and what the evidence is for Israel’s “intention” to maintain apartheid. For example, under a section subtitled, “Intent to Oppress and Dominate Palestinians,” Amnesty points to Israel’s “explicit policy of establishing and maintaining a Jewish demographic hegemony and maximizing its control over land to benefit Jewish Israelis while minimizing the number of Palestinians.” Under another subsection subtitled, “Palestinians and Jewish Israelis as racial groups,” Amnesty explains, “Jewish Israelis form a group that is unified by a privileged legal status embedded in Israeli law,” while Palestinians “are treated by the Israeli state differently based on its consideration of them as having a racialized non-Jewish, Arab status.” (The report acknowledges that defining the category of “racial group” can be complicated, but says it has adopted the latest international human rights jurisprudence—which,as summarized by the scholar Corala Lingaas, holds that “if a group is perceived and treated as a distinct racial group [by the perpetrator], it would qualify as a racial group in the meaning of the crime of apartheid.”)

What makes this report different from other, similar reports?

Since July 2020, a succession of human rights groups in Israel and globally have issued the charge that Israel is committing the crime of apartheid. (Palestinian writers and groups have long accused Israel of apartheid, with one of the first such analyses published in 1965). The first such report came that July from Yesh Din, a prominent Israeli human rights group, in a legal opinion authored by Michael Sfard, an Israeli human rights lawyer. In his paper, Sfard concludes that Israel does operate an apartheid regime, but, unlike Amnesty International, he limited his analysis to the West Bank only. In April 2021, Human Rights Watch issued its report, which stated that specifically in the occupied Palestinian territories, the “systematic oppression of Palestinians and inhumane acts committed against them,” combined with Israel’s “intent to maintain the domination of Jewish Israelis over Palestinians,” add up to the crime of apartheid. While the HRW report examined Israel’s discriminatory legal regime targeting Palestinian citizens of Israel, it did not explicitly conclude that this discrimination amounted to apartheid.

Arguably, it is the Israeli human rights group B’Tselem’s report, issued in January 2021, that most closely resembles Amnesty’s. Both B’Tselem and Amnesty say that while Palestinian citizens of Israel are treated differently than Palestinians elsewhere, the whole Israeli regime—including within its pre-1967 borders, as well as East Jerusalem, Gaza, and the West Bank—should be characterized as “apartheid,” since Palestinian citizens are discriminated against and controlled by the same government that rules over Palestinians in the occupied territories. They argue that the system of Israeli apartheid is best understood when considered as a broad effort to dominate Palestinans across the territory, which also includes fragmenting Palestinians from one another by applying different legal standards of control. (Amnesty also points to Israel’s denial of the right of return for Palestinian refugees, many of whom live outside of Israel’s borders, as one aspect of Israel’s apartheid regime.)

How did Israel, the US, and American Jewish groups react?

In contrast to its relative passivity in response to the release of the Human Rights Watch and B’Tselem reports, Israel launched a concerted campaign to undermine the Amnesty report even before it was published. Israel’s Foreign Ministry accused Amnesty of issuing a “false, biased and antisemitic” report that would “harm not only Israel, but Jews around the world.”

That charge—that Amnesty was endangering Jews—was echoed by mainstream Jewish groups in the US. The Anti-Defamation League said the report was “irresponsible and likely will lead to intensified antisemitism around the world.”

A joint statement from a number of leading Jewish groups—including the Conference of Presidents of Major American Jewish Organizations, AIPAC, the ADL, the American Jewish Committee, the Jewish Federations of North America, and B’nai B’rith International—claims that the Amnesty report is “an unbalanced, inaccurate, and incomplete review” that “inexplicably focuses on one aim: to demonize and delegitimize the Jewish and democratic State of Israel.”

Biden administration officials were not as strident, but they too dismissed the report. “We reject the view that Israel’s actions constitute apartheid,” State Department spokesman Ned Price said. Most elected officials from both sides of the aisle also lambasted the report.

But not everyone in Israel and the US agreed. Fourteen Israeli human rights groups published a statement in defense of Amnesty’s report accusing the Israeli government of implementing an apartheid regime. The groups included leading Israeli human rights groups such as Breaking the Silence, B’Tselem, and Physicians for Human Rights-Israel. “We wholeheartedly reject the idea that Amnesty International's report is baseless, singles out Israel, or displays antisemitic animus,” the statement read. “Attempts to distract from Israeli violations and to avoid substantive debate by hurling spurious accusations is the standard and ongoing practice of successive Israeli governments and their echo chambers overseas.” Meanwhile, a small number of Democrats in Congress who have long criticized Israel’s human rights abuses welcomed the report, including Reps. Rashida Tlaib, Betty McCollum, Ilhan Omar, and Cori Bush. “.@Amnesty is the latest human rights organization raising the alarm about Israel’s crime of apartheid against Palestinians. We must end US taxpayer support for this violence & stand up for Palestinian human rights and liberation, including by passing @BettyMcCollum04’s HR 2590,” tweeted Bush. 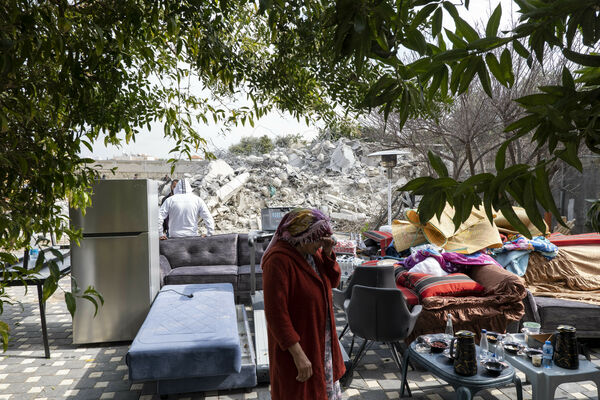 Israeli police forces arrived February 7th to demolish the Mahrab family’s home in the Pardes Snir neighborhood of Al-Lydd (Lod) on the last day of the demolition order. The house, home to nine people, received a demolition order after having been rebuilt and renovated after burning down in 2013. Last week, the father of the family was arrested when he fortified himself with gas balloons and was again arrested during the demolition. Pardes Snir is a neighborhood without an outline plan, preventing residents from building legally with a permit. In 1948, only 1,000 Palestinians managed to remain in Al-Lydd out of 50,000 residents (30,000 of which were refugees from the Jaffa area). Today, the city has almost 78,000 residents, only 30% of whom are Palestinian. All refugees from Al-Lydd living in UNRWA refugee camps are still banned from returning by the Israeli state.

Israeli police forces arrived February 7th to demolish the Mahrab family's home in the Pardes Snir neighborhood of Al-Lydd (Lod) on the last day of the demolition order. The house, home to nine people, received a demolition order after having been rebuilt and renovated after burning down in 2013. Last week, the father of the family was arrested when he fortified himself with gas balloons and was again arrested during the demolition. Pardes Snir is a neighborhood without an outline plan, preventing residents from building legally with a permit. In 1948, only 1,000 Palestinians managed to remain in Al-Lydd out of 50,000 residents (30,000 of which were refugees from the Jaffa area). Today, the city has almost 78,000 residents, only 30% of whom are Palestinian. All refugees from Al-Lydd living in UNRWA refugee camps are still banned from returning by the Israeli state.