(Note: this is a guest post from contributing editor Joshua Leifer.)

Yair Lapid speaks to the press at a protest against Benjamin Netanyahu’s incoming government on December 9th, 2022.

In early December, incoming Israeli Prime Minister Benjamin Netanyahu announced that his Likud party had struck a deal with the hardline anti-LGBTQ party Noam, part of the far-right Religious Zionism coalition. Under the agreement, Noam’s leader, Avi Maoz, will reportedly serve as a deputy minister in Netanyahu’s office, overseeing a branch of the education ministry that decides which organizations can conduct educational programming inside public schools. Maoz will also run the agency responsible for managing the relationship between the government and civil society groups, effectively enabling him to determine which groups will receive governmental support and which won’t. It is a striking amount of power for a man whose party holds only one Knesset seat—his own.

A resident of the City of David settlement in occupied East Jerusalem, Maoz has emerged over the last five years as one of the most extreme voices in Israeli politics due to his virulently anti-LGBTQ religious conservatism. Once in his new role, Maoz has pledged to cancel the Jerusalem Pride Parade, despite reassurances by Netanyahu to the contrary. “These marches harm the holy Jerusalem and our public sphere,” Maoz told a small religious weekly, calling the annual demonstration “a parade of abominable whoredom in public.” Maoz also has a long record of denigrating liberal denominations of Judaism, which he views as subversive attempts to undermine the religion’s foundations. Channeling a well-known Israeli Hanukkah song, “We Came to Banish Darkness,” during a Knesset speech earlier this month, Maoz said: “Anyone who tries to create a new so-called liberal religion is the darkness. Anyone who—with intentional concealment and obfuscation—tries to brainwash the children of Israel with their agendas, without the knowledge of their parents, is the darkness.”

Israeli centrists have decried Maoz’s appointment and pledged to resist his policies if necessary. Earlier this month, the secularist, middle-class Yesh Atid party led by outgoing Prime Minister Yair Lapid announced that it was opening a “hotline” for parents interested in “blocking the racist and homophobic agenda of Avi Maoz from getting to their children’s schools.” After Lapid called on Israeli mayors and municipal leaders to serve as “gatekeepers” in order to “keep Israel’s education system statesmanlike and liberal,” more than 300 school principals signed a petition denouncing Maoz.

Yet this secularist backlash contrasts starkly with the muted reaction by most Israelis to the territorial-maximalist program of Netanyahu’s other far-right coalition partners—in particular, Itamar Ben-Gvir, leader of the Kahanist Jewish Power party, and Bezalel Smotrich, leader of the Religious Zionism party. And indeed, with their assumption of prominent roles, the new government is poised to intensify the repression of Palestinian and left-wing activists and further entrench the settlement enterprise in the West Bank. It may even move to dismantle Israel’s constitutional order, subordinating the judiciary to the parliament in order to formalize Jewish ethnocratic rule. Ben-Gvir and Smotrich have been at the center of hand-wringing about the new government in other parts of the world. And yet the focus of Israel’s fractured opposition has largely been elsewhere. The broad Israeli Jewish consensus in support of maintaining the occupation has relegated the issues that most concern international observers to secondary or even tertiary importance. Instead, opposition protests have dealt mainly with matters of religion and state, focusing first on Maoz’s pending appointment, and secondly on pervasive corruption within Netanyahu’s right-wing bloc.

To be sure, Maoz embodies a frighteningly regressive vision. But the focus of the centrist opposition on his appointment, and more generally on the perceived threat of increased religious coercion, is revealing. Much like the #Resistance that emerged in the US after Trump’s election, Israel’s secular liberal opposition is doubling down in defense of the existing order, calling for a return to the status quo. In recent weeks, Lapid-led demonstrations have filled bridges around the country, a ritual developed to protest Netanyahu’s corruption during his last ministerial term. Not only their tactics but their terms are familiar: Their demands are for sanity, for a return to normalcy. “This government is not a normal event, it doesn’t even represent the results of the election,” said Lapid, dressed in his signature all-black shirt and blazer, at a protest on the KKL Bridge in Tel Aviv on December 9th. “The Likud has become a junior player in its own government, Netanyahu has never been weaker, and extremists are driving the system to insane places.” The daily, brutal violence that the status quo entails is not among the concerns motivating Israel’s self-identified liberals; indeed, the fact that this system of violence has helped produce the newly empowered far-right that includes Maoz as well as Ben-Gvir and Smotrich seems to be lost on them.

One indication of the opposition’s lack of concern for Palestinian human rights is that the centrist parties have dropped even the pretense of coordinating opposition parliamentary strategy with their Arab-led counterparts, Hadash and Ta’al. Last month, when Lapid convened a meeting of the heads of opposition parties to “plan and think together,” he excluded Hadash leader Ayman Odeh and Ta’al leader Ahmed Tibi. Anway, Tibi told the liberal daily Haaretz, “there’s nothing for us at a meeting of the Lapid camp.”

If this level of exclusion marks a regression from the talk of Arab–Jewish political partnership that characterized the 2019 and 2020 election cycles, the absence of substantial parliamentary opposition to apartheid rule is nothing new. For decades, the Knesset has lacked any effective anti-occupation force, leaving civil society organizations and human rights NGOs to fill the void. Groups such as Breaking the Silence, which publishes testimonies of Israeli soldiers who fought in the occupied West Bank and the Gaza Strip, and B’Tselem, which documents Israeli rights abuses in the occupied territories, have frequently been obliged to enter the political fray, pushing back against legislative changes, testifying in the Knesset, and serving as isolated voices of dissent in a public sphere where the occupation is broadly accepted.

That visibility has come with a cost. These groups are demonized, their representatives threatened by some of the most powerful political figures in the country. It is not unthinkable that, once in control, the new government could bar Breaking the Silence from operating, or seriously hamper the ability of B’Tselem to work without fear of legal repression. When Breaking the Silence co-director Avner Gvaryahu testified before an Israeli parliamentary committee last week, Likud and other right-wing MKs launched insults at him. “You’re an abominable, disgusting traitor who belongs in jail,” Likud MK Hanoch Milwidsky said.

Yet Israel’s centrists have hardly been friendlier to human rights groups. Lapid himself has made similar comments in substance, if not in style. In 2015, he announced that he intended to pass legislation that would block funding for groups like Breaking the Silence that, Lapid said, “help to defame Israel,” and whose criticisms “erode the foundations of the state.”

To the extent that the new government’s posture of hostility toward Palestinians has occasioned a backlash in Israel at all, it has been driven largely by the possibility that new, draconian measures could provoke a response that might endanger Israelis. Ben-Gvir’s role as national security minister and Smotritch’s oversight of the civil administration in the occupied West Bank have been the source of particular unease among Israel’s defense establishment. Labor MK Omer Bar-Lev—the current minister of internal security whose office is set to be transformed into Ben-Gvir’s—has warned against the expansive powers that his successor stands to inherit, arguing that Ben-Gvir’s proposed legislation to place the police under his own command will lead to the force’s “politicization,” thereby undermining the rule of law. In an interview with the right-wing tabloid Israel Today, Bar-Lev cautioned that Ben-Gvir’s additional plan to take direct control of the Israeli Border Police units that operate in the occupied West Bank would violate international law, according to which the IDF, and not the Israeli government, is the sovereign in the occupied territories.

But Bar-Lev and the defense establishment have shown much less concern about the way the same troops already consistently violate international law in the occupied territories. Indeed, the government in which Bar-Lev serves—headed first by former settler leader Naftali Bennett, then by Lapid—has hardly taken a dovish line on the Palestinians. In response to rocket fire from the Gaza Strip this August, the IDF launched Operation Breaking Dawn, an aerial assault that killed at roughly 44 Palestinians and left 350 injured. In the West Bank this year, Palestinian fatalities from IDF and settler violence reached their highest number since 2005. What the centrist opposition objects to, then, is not the exercise of routine brutality to sustain a military dictatorship in the West Bank and siege of Gaza, but the abandonment of an appearance of propriety and reasonableness by those who carry out the violence.

Such is the reality of “managing the conflict,” the strategy that has guided the Bennett–Lapid government, and which has constituted, El-Ad said, “not a break from the past, but rather a continuation.” When the new government is sworn in, he added, it will merely be “building on the already existing legal and political infrastructure that enables Israel’s long-standing regime of Jewish supremacy.” 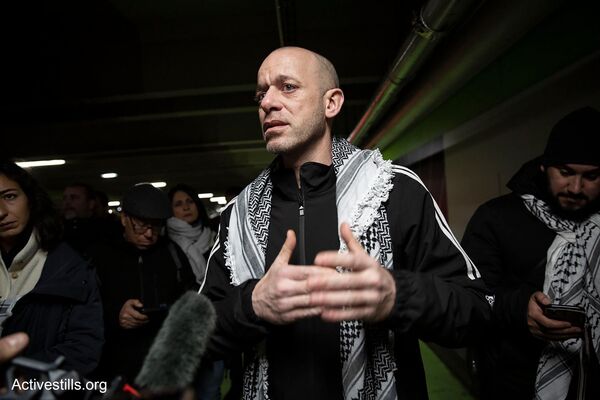 Palestinian human rights lawyer Salah Hammouri, who was deported by Israel after the government revoked his Jerusalem residency, arrives in Paris on December 18th, 2022. Hammouri, who also holds French citizenship, had been detained in an Israeli prison without charge since March. UN Human Rights Office spokesperson Jeremy Laurence condemned the Israeli government’s actions, saying that “deporting a protected person from occupied territory is a grave breach of the Fourth Geneva Convention, constituting a war crime.” Photo: Anne Paq/ Activestills.