On Tuesday morning, a gunman on a Manhattan-bound N train passing through the diverse Brooklyn neighborhood of Sunset Park opened fire in the crowded cabin, injuring ten passengers with bullets and another 13 with smoke grenades. Miraculously, none of the injuries were fatal. Despite the heavy police presence that New York Mayor Eric Adams deployed into the subway system earlier this year, the suspect, a 62-year-old man named Frank James, was able to flee the scene and remain at large for more than 24 hours before being identified by a 21-year-old Syrian immigrant working at an East Village bodega, who apparently—according to one of a few conflicting accounts—helped the cops find and arrest the shooter.

While singular in its horror, this week’s mass shooting comes in the context of a perceived crime wave in New York that helped propel Adams, a former beat cop, into office—and even as it revealed the inadequacy of Adams’s policing-driven public safety strategy, it is likely to result in even more cops on the subway, even larger NYPD budgets, and an even harsher police crackdown on unhoused New Yorkers. For this week’s newsletter, I spoke with Nick Pinto, a Brooklyn-based journalist who writes about police, courts, and prisons for outlets including The Intercept, Gothamist, Rolling Stone, The New York Times Magazine, and The Wall Street Journal, to try to get a clearer understanding of the limitations of Adams’s policy approach. Our conversation has been condensed and edited.

P.S. There will be no Shabbat Reading List this week because Jewish Currents is taking Passover off. Chag sameach! 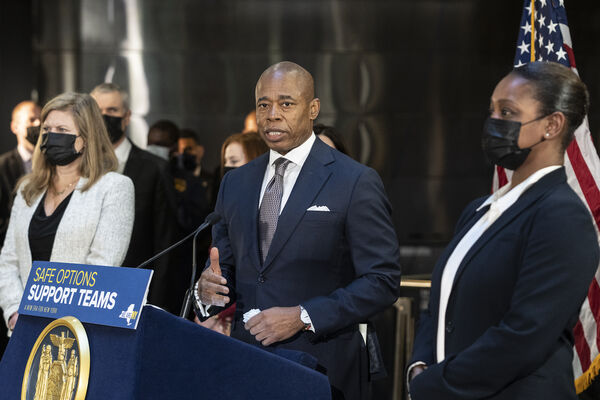 Nick Pinto: You’re right to frame the question as predating Adams, because the debate over subway policing tactics is a much older story. Even before the 2020 Black Lives Matter uprisings, there was a whole series of rolling radical protests that were specifically about policing in the subways. Those protests were responding to a series of initiatives by de Blasio to come down ever harder on fare evasion, which is a crime of poverty in which people who can’t afford subway fare hop the turnstile. It ties into a larger theory of broken windows policing—the idea is that by tolerating some amount of fare evasion and other low-level offenses, the subway was sliding into disorder, and the way to prevent more serious offenses was to crush fare evasion with overwhelming police force. So that was the policy for most of de Blasio’s administration, and that is the response across administrations when there's a sense that the subways are disorderly or unsafe. It’s hard to prevent one-off, unpredictable, spectacular acts of violence; what police are much better at, and what they’re trained to do, is to tackle the kid who hops the turnstile, or to arrest the homeless guy who’s looking for a warm place to sleep, or to harass the woman selling churros. And there’s this backwards-justifying theory that in doing the thing that they’re good at, they’re actually having some effect on the thing that they’re not particularly good at, which is ensuring public safety.

In absolute numbers, crime in the subway went way down starting in early 2020, which continues to this day, because ridership went down thanks to the pandemic; on the other hand, the number of incidents per capita went up. Beyond the actual phenomenon of crime in the subway, there’s a meta-phenomenon of public awareness of crime, and that’s what politicians are really responsive to. What makes the public perception so complicated is that in between the phenomenon and the meta-phenomenon, there’s this mediating force, which is the press—which is extremely attached to promulgating a narrative of a city spiraling into chaos and violence and disorder. Every time there is a violent incident or the trendline spikes upwards, the media is making enormous amounts of hay over telling people that they’re not safe on the subway.

DK: Which brings us to Adams’s campaign for mayor last year. How did the electorate respond to Adams’ image as a former cop running to restore law and order?

NP: The primary field for the mayoral race had candidates who were making two different bets about where popular sentiment was on policing. A lot of them were betting that as a result of Black Lives Matter, the reassessment of stop-and-frisk, and the 2020 uprisings after George Floyd’s murder, that there was a real appetite for a reformist approach to criminal justice and policing. Adams made the opposite bet, and it turned out that he was right. He ran a complicated campaign; it’s not like he was a Frank Rizzo-esque, “lock-em-up” figure. In addition to being a cop he was also a former victim of racist policing. That’s part of his story too. And in his time in the NYPD, he was extremely concerned with reforming the police—although he was mostly interested in reforming the way the police treat Black and brown people who are police officers, not Black and brown citizens in general. Nevertheless, he wasn’t a cop’s cop, he was more of a dissident cop. That allowed him to say, “I know what I’m talking about, I’ve walked that beat, and I’ve also been inside the police department, so I know what’s wrong with it and what needs to be fixed. But I also know how to keep you safe.”

That turned out to be a winning message. I think a lot of people are still trying to understand how the massive mobilization of the summer of 2020 did not really turn into a lasting political movement, or even an inclination when people entered the voting booth.