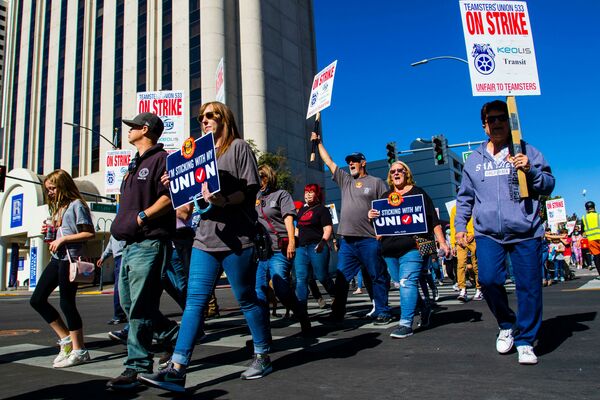 Strikers and allies march in support of a Teamsters local during a 2021 strike.

After decades in decline, the labor movement has entered a period of revival in the past few years, with workers at some of the world’s wealthiest companies beginning to unionize and strike. A less visible but perhaps equally significant sign of labor’s growing leverage is the Biden administration’s choice of staunchly pro-labor lawyer Jennifer Abruzzo to chair the National Labor Relations Board (NLRB), the federal body that governs the relationship between employers and unionized workers under the 1935 National Labor Relations Act (NLRA). Under Abruzzo, the NLRB has become increasingly vocal in opposing employers’ anti-union tactics, such as retaliatory firings of organizers and captive audience meetings, where employees are required to listen to anti-union talking points at work.

But the pro-worker NLRB, and organized labor as a whole, now face a new challenge in the form of alawsuit that the Supreme Court has agreed to hear this term. The case was brought by the cement company Glacier Northwest, which sued the union that represents its workers for damages over economic losses that the company suffered due to a strike. While the case itself would only affect around 40 workers, its ripple effects could be significant. As labor lawyers Terri Gerstein and Jenny Hunter wrote in Slate, “given the court’s recent history, it seems most likely that the court will use the Glacier case to weaken labor law”—specifically, by making strikes so costly for unions as to render them potentially unfeasible.

Jewish Currents spoke to Benjamin Dictor, a union-side labor attorney at Eisner Dictor & Lamadrid, to understand the significance of the Glacier case and its implications for the right to strike. The interview below has been edited for length and clarity. Happy reading!

Aparna Gopalan: What exactly is the Glacier Northwest case?

Benjamin Dictor: The case concerns a Teamsters local made up of workers at the cement company Glacier Northwest. In 2017, these workers’ union contract had expired, so they went on strike to try to win an improved one. Most contracts contain a no-strike clause under which the union agrees not to strike as long as the contract is in effect—but when the contract expires, so does the clause. In such a case, an ensuing strike is protected under the NLRA.

But Glacier Northwest argues otherwise, alleging that the Teamsters’ strike should not be protected because it was deliberately timed to cause damage to company property. They say that the Teamsters chose to begin their strike when the employer’s trucks were filled with cement so that, when the trucks were left sitting, the cement would be ruined, causing a significant loss of capital.

There are several issues with Glacier’s assertion. First of all, the union says that they didn’t intend to spoil the concrete, and even took steps to prevent that from happening, like keeping the trucks running when they returned them to the lot. So whether there even was deliberate economic harm is a disputed fact in this case. Secondly, even if the workers had timed the strike intending for the cement to be ruined, this would not make the strike illegal under the NLRA. There’s no regulation that dictates how workers have to time their strikes. If Glacier is running a business without a collective bargaining agreement, they are operating under the risk that there could be a strike at any time, regardless of whether the cement trucks are empty or full.

AG: If the workers’ actions are protected under the NLRA, on what grounds is Glacier suing them?

BD: Glacier is basically trying to do an end run around the NLRA. Before the NLRA was passed in 1935, the laws governing unions and strikes varied from state to state, meaning that a state could prohibit workers from engaging in direct action against their employer. The NLRA standardized and enshrined workers’ right to unionize and strike, and in the 1959 case San Diego Building Trades v. Garmon, the Supreme Court ruled that the NLRA overrides state law in any cases where both might apply. This is referred to as “Garmon preemption.”

Glacier is trying to challenge that preemption by saying, “Let’s deal with this case under the law that governs property damage, not the law that governs strikes.” Under Garmon, that would not be allowed, because the NLRA would preempt the other laws that the case might fall under. To find in favor of Glacier, the Supreme Court would have to rule that this Teamsters’ strike can be adjudicated under other laws because it does not fall under the NLRA.

This would be a slippery slope. The very nature of a strike is to cause or threaten economic harm in order to exercise economic leverage. To say that causing economic harm to an employer can lead a strike to fall outside labor law is a dangerous theory.

AG: What could be the consequences of a ruling in favor of Glacier?

BD: This court is, obviously, ideologically driven, and we don’t necessarily have an expectation that they will deal with things in a narrow way. They could essentially carve out an exception to Garmon preemption, and that exception could be so broad as to make unions question taking a strike action of any kind because they wouldn’t know if their action would be protected under federal law.

If Glacier Northwest is successful here, I anticipate that we’ll see employers in various states advancing legal cases against unions for striking, in which they will attempt to distinguish whatever action the union takes from the action that the federal law clearly protects.

In other words, if the Supreme Court carves out an exception to the preemption, I think it could kill unions’ use of the strike as a tool, because any strike would carry a risk of a retaliatory lawsuit under state law. The uncertainty will force unions to do a risk analysis that may stifle their ability to engage in a form of direct action that has been protected by federal law since the 1930s.

AG: Thinking about other major assaults on federal rights coming out of this Supreme Court—the elimination of the right to abortion, for instance—they seem to emerge from long, concerted conservative movements. Is this case similarly coming out of a longstanding employers’ lobby? How does this connect with the broader offensive against labor?

BD: Employers have definitely been engaging in litigation strategies to weaken unions and the NLRA. For instance, there’s been a long campaign against union security, which has essentially tried to eliminate unions’ ability to collect dues from workers; we saw this with the 2018 Janus v. AFSCME case, where the Supreme Court ruled that public sector unions cannot charge agency fees from all the workers they represent, a move that weakens those unions considerably. And there have been attempts to expand the logic of Janus into the private sector.

What makes this particular assault on labor different from the previous ones is that it is challenging NLRA preemption. That issue has been well settled for such a long time that it’s shocking that the court would agree to hear this case. If it wasn’t for the composition of this court, it’s not an approach we would have to be concerned about.

AG: Lawyers I’ve spoken to are expecting unions to fight this case by doing things like filing amicus briefs defending the precedent of Garmon preemption. What can we expect from this effort?

BD: It’s certainly important for unions and union lawyers to fight the good fight through the courts. But I personally think that one of the most important things any labor lawyer can do for the unions they represent is to keep the fight out of the courtroom as much as possible. Labor’s home field advantage is on the shop floor.

It’s important to remember that the NLRA came into being not as some benevolent act by the government to give rights to workers, but rather as a legislative tool intended, in part, to mollify the working class in an era of escalating militancy—a time of mass sit-down strikes and shop floor actions across the country. What the NLRA did was take the fight away from the shop floor and center it in the courtroom and at the bargaining table. Industry and capital were the primary—perhaps the exclusive—beneficiaries of this kind of labor peace.

Why should we prioritize the fight on capital’s turf? We certainly need to be there. And unions do need to participate in strategic impact litigation when they think there might be an opportunity to advance their rights through that process. But that is not how labor wins. We win by organizing and taking direct action.

AG: Speaking concretely, if I was talking to workers who were thinking of going on strike right now, and their boss said, “I’m watching this case, and if you strike, I’m going to sue you,” what would I advise the workers to do?

BD: This is an example of the chilling effect this case could have on workers. Workers risk stripping themselves of their own economic leverage if they allow our concern about what might happen in this case to stop them from engaging in actions that have been deemed lawful since the passage of the NLRA. Ultimately, we can’t predict how broad any adverse decision might be. Once the case is decided, there will be an opportunity to reassess, but we shouldn’t shortchange ourselves in the meantime.

AG: We seem to be witnessing a rise in labor’s power, with the NLRB seemingly on workers’ side, and strike activity rising. How does this case prompt us to reassess the broader labor law landscape and where workers’ power might lie?

BD: The NLRB is a pendulum that swings back and forth with every administration, with entire doctrines governing labor law changing; things that were once protected become unprotected and vice versa. Workers can’t rely on the NLRB.

What makes the situation worse is that we haven’t seen any meaningful labor legislation at the federal level in generations, though administration after administration has made promises to labor. During the Obama administration, the Employee Free Choice Act, which would have made it easier for workers to unionize and harder for employers to break labor law, failed to make it through the Senate. Before Biden was elected, we heard about the Protecting the Right to Organize Act, which revived some of the Employee Free Choice Act’s demands—but it has faced similar challenges in the Senate. We don’t see any meaningful opportunity to advance the rights of labor on the legislative front.

Meanwhile, the judiciary is poised to bring us back in many respects to a time before the NLRA, when strikes could be governed in part by various state laws. So if we don’t have the legislature, we don’t have the judiciary, and we perhaps have some support from the executive for the time being but it might end soon, what do we have?

Well, we, as labor, have the thing that scares all of them—the thing that this case is about. The employers are telling on themselves by advancing their assault in this particular way, because this isn’t a case where workers threw bricks through the company windows or engaged in industrial sabotage. They simply withheld their labor, and employers are admitting that that was enough to cause serious damage. Whatever happens with the NLRA, this shows that our power continues to be in our ability to take direct action and collectively withhold our labor.