An essay from Joshua Cohen’s new collection, Attention: Dispatches from a Land of Distraction. 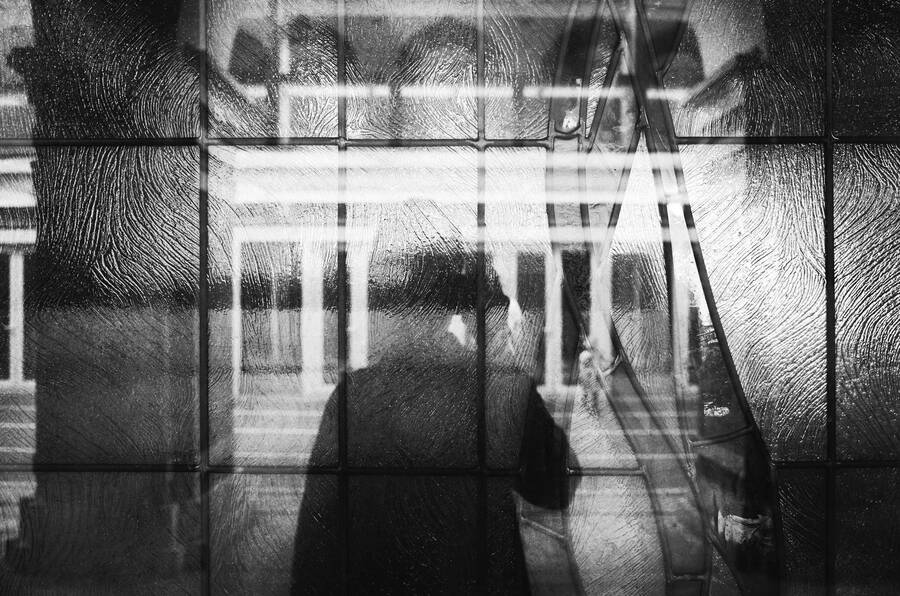 It was Stendhal writing under the protective guise of a bogus epigraph (attributed to historian “Saint-Réal”) who decided it was the novelist’s job to hold up a mirror at the side of the road to catch everything that passed. This would remain the prescription for description in what would later be called the realist novel for the next century and a half. Today, however, everyone is followed down every road by mirrors: We’re tracked by these mirrors to the office and to lunch and through all the rooms of our homes, and though surely we’ve sped up our pace of life in order to evade them, they’re becoming cheaper and cheaper to produce and install, and even lighter and less conspicuous for our family and friends and stalky strangers to carry with them, in the forms of computers in their bags and phones in their pockets. And beyond even that—these mirrors don’t merely reflect momentarily anymore, no—now they also record, and so make all our moments eternal. The final change will come when these mirrors stop following us, and we start following them—seeking out their surveillance, and so seeking out their immortality, becoming so involved in our pursuit of them that we’ll forget what type of machines they truly are, and all we’ll be able to sense are these strange people coming at us at top speed—just “people,” because we won’t be able to recognize our own shrieking selves, and so we’ll inevitably either crash into our own representations, or just swerve at the ultimate moment toward the precipice instead, from which we’ll fall—we’ll fall—which is the sole process by which realism becomes reality.

Stendhal proposed the novel as a mirror held up to the side of the road for a single purpose: to make the political/aesthetic argument that if a novel was concerned with the immoral or ugly it wasn’t the fault of the novel or author but of the thing/situation it was reflecting. Don’t blame the mirror for the puddles in the road, Stendhal was saying, blame the road-surveyor or -inspector. In the nearly two centuries since Le Rouge et le Noir, however, Stendhal’s intent has been distorted or downplayed, and what literature has been left with is the image of the novel as image, a reproduction not of a consensus or objective “reality,” but of one author’s subjective experience.

Zola, born in 1840, two years before Stendhal died, and one year after the appearance of the daguerreotype—the first commercially practical photographic process—referred to this impossible reproduction of a consensus reality as “idealism,” and opposed it with “naturalism,” which characterized novels that sought to expose the forces that produced that consensus. The naturalist novel, from its birth in the late nineteenth century through its disguised heyday in the twentieth, has been precisely about how reality is “made,” as distinct from what reality “is.”

Zola defined this naturalistic approach in an essay that responded to a medical text by a contemporary, the physiologist Claude Bernard, which attempted to transfer the scientific method governing experimentation in chemistry to the precincts of biology—the treatment of disease. It was Zola’s goal to diagnose French society as a doctor would a patient’s body: by analyzing its comorbid maladies one at a time, with a nib as sharp as a scalpel. Only after this diagnosis would treatment—extraliterary, political treatment—be possible.

Zola titled his essay “The Experimental Novel,” and inasmuch as that epithet “experimental” has plagued the careers of countless modern writers, its original context must be recalled: “The experimental novelist,” Zola writes, “is therefore the one who accepts proven facts, who points out in man and in society the mechanism of the phenomena over which science is mistress, and who does not interpose his personal sentiments, except in the phenomena whose determinism is not yet settled, and who tries to test, as much as he can, this personal sentiment, this idea a priori, by observation and experiment.” After a paragraph break, though, Zola hazards a “personal sentiment,” but only in terms of his own incomprehension: “I cannot understand how our naturalistic literature can mean anything else. I have only spoken of the experimental novel, but I am fairly convinced that the same method, after having triumphed in history and in criticism, will triumph everywhere, on the stage and in poetry even. It is an inevitable evolution.” Zola’s hope, which he outlines in this essay and realizes in his series Les Rougon-Macquart, was to show how characters, and how the characters of nations and classes, etc., could all be taxonomized in a vast social hierarchy, and so how their development could be portrayed as methodical as well, through the inheritance and acquisition of physical, mental, emotional, and psychological traits, in a process whose guiding intelligence wasn’t Darwin or Lamarck or even God, but the Novelist-Scientist, who was bound to natural law as strictly as any of his fictional animals.

Zola, early in his essay-experiment, invokes the authority of Balzac (born 1799, and so a generation younger than Stendhal and perhaps two or three generations older than Zola) as a herald of this new literature of process:

The novelist starts out in search of a truth. I will take as an example the character of the Baron Hulot in Cousine Bette, by Balzac. The general fact observed by Balzac is the ravages that the amorous temperament of a man makes in his home, in his family, and in society. As soon as he has chosen his subject he starts from known facts; then he makes his experiment, and exposes Hulot to a series of trials, placing him amid certain surroundings in order to exhibit how the complicated machinery of his passions works. It is then evident that there is not only observation there, but that there is also experiment; as Balzac does not remain satisfied with photographing the facts collected by him, but interferes in a direct way to place his character in certain conditions, and of these he remains the master.

A dozen pages later Zola quotes Claude Bernard’s medical-metaphoric conception of the “vital ‘circulus’”: “The muscular and nervous organs preserve the activity of the organs which make the blood; but the blood, in its turn, nourishes the organs which produce it.” Then, Zola writes:

Go back once more to the example of Baron Hulot in Cousine Bette. See the final result, the denouement of the novel: an entire family is destroyed, all sorts of secondary dramas are produced, under the action of Hulot’s amorous temperament. It is there, in this temperament, that the initial cause is found. One member, Hulot, becomes rotten, and immediately all around him are tainted, the social circulus is interrupted, the health of that society is compromised. [. . .] Suppose that Hulot is cured, or at least restrained and rendered inoffensive, immediately the drama ceases to have any longer any raison d’être; the equilibrium, or more truly the health, of the social body is again established. Thus the naturalistic novelists are really experimental moralists.

Engels once said that he learned more about France from Balzac than from “all the professed historians, economists, and statisticians of the period together.” Paul Lafargue, in his Reminiscences of Marx, writes that Marx—who was born in 1818, the year Balzac decided to dedicate his life to writing—so deeply loved La Comédie humaine that if he ever finished with economics he intended to write a study of it. Though not even a sentence of that study ever appeared (rather, Marx borrowed a few of Balzac’s sentences for The Eighteenth Brumaire of Louis Bonaparte), it seems that what Marx most appreciated in Balzac’s sequence was the way in which it illustrated the processes by which an individual, while operating under the delusion that he or she was forming society, was instead being formed by it. Marx transferred the personalities and struggles of Balzac’s characters—their struggles with spouses, lovers, employers, employees, clergy, and the chaos of the Restoration and July Monarchy—to entire social classes: the newly individuated bloc of the working proletariat, which (I nearly wrote “who”) fomented a failed revolution and was left to suffer under the repressions of Napoleon III.

It doesn’t take a Žižek to point out that identifying a social problem in fiction doesn’t solve that problem in life, and that while a book can describe the processes that create a problem, that description itself becomes an integral component of the problem’s irresolution. The writer is never exempt from, or outside of, the writing, then, but remains as much a product of ideology as any of his or her characters.

The selves that all true writers must recognize and acknowledge in the ideological mirror—the selves that are most fully created by the writer becoming aware of his or her emplacement in multiple simultaneous identity-continua (economic, gender, sexual, racial, etc.)—feel so supernatural that, paradoxically, they seem to render even the most fantastical fictions “naturalistic.” Marx referred to these selves, these negative images of the faces that a writer presents to the world, as “shadows.”

For many of my peers, to write about the present is to search for a mirror that will show only shadows.

Conversation
An Act of Pure Presence
Justin Taylor discusses his new memoir, writing about his father, and depression as a failure of narrative.
Joshua Cohen
Sign up for our email newsletter, featuring exclusive original content
Short on time?
Sign up for our weekly Monday roundup of everything you missed in Jewish Currents last week.