Why I Signed the Jerusalem Declaration on Antisemitism

Despite my worry that any definition of antisemitism reinforces beliefs in Jewish exceptionalism, the flawed and widely adopted IHRA definition needs outright replacement. 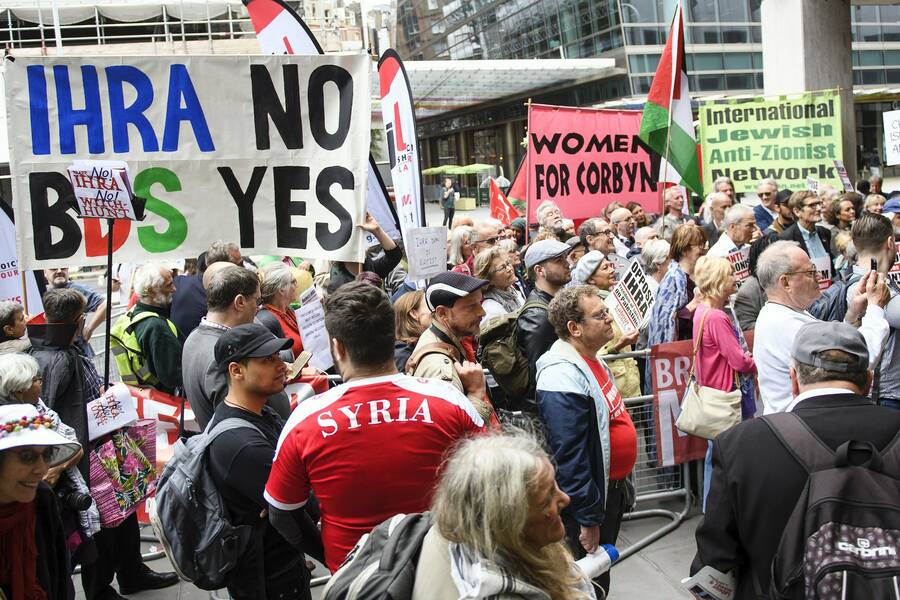 IN THE FALL OF 2017, in my capacity as a scholar of Jewish history, I advised the US House Judiciary Committee to reject codifying into law definitions of antisemitism such as those that were contained in the “Anti-Semitism Awareness Act,” which was then under consideration by Congress. I objected to the language of the bill, which was based on the definition of antisemitism adopted by the International Holocaust Remembrance Alliance (IHRA)—a definition that equates valid criticism of Israel and Zionism with antisemitism and has thus become a tool for the suppression of protected speech. But I was also concerned with the possibility that the legislation would inadvertently reinforce perceptions of Jewish exceptionalism: By claiming that there was a need for a set of standards that was distinct from existing civil rights legislation and which defined what could and couldn’t be said about Jews, I argued, Congress not only risked putting unconstitutional limits on free speech, but also risked reinforcing the idea that Jews are a people for whom special rules need to be made. I testified that at the core of anti-Jewish hatred rests the belief that Jews are exceptionally unique in the world, and that by making legislation that was focused exclusively on antisemitism rather than religious, racial, and ethnic hatred more broadly, Congress would be singling out Jews in a way that would run contrary to the stated goals of the legislation.

Yet now, in spite of this concern, I am a signatory to the newly released Jerusalem Declaration on Antisemitism (JDA), which puts forth its own definition of antisemitism and a set of guidelines for how to identify what is and is not antisemitism. Furthermore, I was active in the scholarly conversations that resulted in its drafting. Like many of my colleagues, I participated in the effort to produce the JDA to curb the growing momentum by the state of Israel and many of its supporters to wield the IHRA definition to restrict valid criticisms of the state, often in the form of political organizing that targets it. Although I remain apprehensive about inadvertently reinforcing beliefs in Jewish exceptionalism, the widespread adoption and abuse of the flawed IHRA definition has convinced me that it needs outright replacement. As the result of more than a year of conversations by an international group of scholars from the fields of antisemitism, Jewish, Holocaust, and Middle East studies, the JDA is a vast improvement on the IHRA definition. While it is not a perfect document, and has indeed already been subject to important criticisms from those who argue, among other points, that it doesn’t go far enough to unseat the IHRA definition, the JDA has the potential to make a significant impact both in countering antisemitism and in preventing critics of Israel and Zionism from being smeared as antisemites.

The IHRA definition has a long and fraught history. Since the organization adopted the definition in 2016, it has been accepted by at least 18 countries, by the US federal government (via a 2019 Trump executive order, as well as through the US State Department and the Department of Education’s Civil Rights Division), and by more than two dozen US states. As many cases in the US and the UK have made clear, the definition has had—as its advocates intended—a profoundly chilling effect on speech that is critical of Israel.

In contrast to my concerns regarding the Anti-Semitism Awareness Act, the JDA repudiates notions of Jewish exceptionalism by locating antisemitism squarely as an ideology of hatred that is equivalent to and as pernicious as racism. The JDA’s first guideline states unequivocally that, “It is racist to essentialize (treat a character trait as inherent) or to make sweeping negative generalizations about a given population. What is true of racism in general is true of antisemitism in particular.” By drawing this comparison with racism, the JDA pushes back against the misguided belief about antisemitism that it is a unique and unparalleled form of hatred, as exceptional as Jews themselves. Not only does this belief strip anti-Jewish hatred from its historical context and make it much harder to combat, it gives rise to the notion that antisemitism is a permanent, almost natural, feature of our world and thus cannot be undone.

While the first JDA guideline addresses the relationship of antisemitism to racism, and several others speak to “classical” expressions of antisemitism, the lion’s share of the guidelines contend with how to discern between speech that is critical of Israel and Zionism and speech that is antisemitic, rather than to equate the two. This heavy focus on Israel has raised legitimate concerns that the JDA inadvertently reinforces the false association of criticism of Israel or Zionism with antisemitism. After all, as far too many incidents of the past several years have demonstrated, the tangible threat to Jewish lives that exists today from antisemites stems not from critics of Israel but primarily from the far right and white supremacists. This is true not only in the United States, but also globally. And still, there are important reasons for the JDA to prioritize guidelines for discerning between criticism of Israel’s actions, laws, and founding principles on the one hand, and antisemitic speech and behavior on the other. The IHRA definition has been used almost exclusively to silence Palestinians discussing their daily experiences of humiliation, violence, and dispossession under Israeli rule. In challenging the IHRA’s insistence that speech critical of Israel’s founding principles is inherently antisemitic—by declaring that “criticizing or opposing Zionism as a form of nationalism” is prima facie not antisemitic, nor is the BDS movement, nor are comparisons to Israeli policy with apartheid, if the goal is to critique the state—the JDA opens up space for Palestinians to speak about their oppression and to confront their oppressors.

Another critique of the JDA has struck a chord. The reference to “Jerusalem” in the title has signaled to some that it reinforces Zionist claims that the city is an exclusively Jewish space. The name is representative of the fact that the group initially sought to convene in Jerusalem (but was prevented from doing so by Covid-19). But I also see it as containing a larger symbolic value: casting Jerusalem as a shared space where well-intentioned people of different perspectives and backgrounds can reach mutual understanding over how to combat systemic hatred. In this light, it is a refutation of the idea that the city is exclusively Jewish—just as the definition itself is a renunciation of Jewish exceptionalism and an attempt to integrate an understanding of antisemitism into a broader understanding of racism.

It is regrettable that more than a year’s worth of intellectual time and energy had to be spent on this initiative, which risks further classifying speech concerning Jews as a “special case” that requires its own set of guidelines. However, the damage done by the IHRA definition of antisemitism is profound. It has restricted reasonable debates about Israel and done nothing to lessen antisemitism. It must be stopped in its tracks. Whatever its shortcomings, the JDA is the product of a long, thoughtful process of ethical dialogue between an international body of scholars and a broad range of interest groups, all of whom are deeply invested in combating antisemitism. As such, it is a work of consensus with which I suspect none of the signers will be completely satisfied. Nevertheless, it is a necessary tool to identify antisemitism while defending the right to speech and political action that is critical of Israel. Now that it has been drafted, we can get on with the work of dismantling antisemitism and supporting freedom in Palestine/Israel.

Barry Trachtenberg is the Rubin Presidential Chair of Jewish History at Wake Forest University and author of The Holocaust & the Exile of Yiddish (2022) and The United States and the Nazi Holocaust: Race, Refuge, and Remembrance (2018). He is a member of the Academic Advisory Council of Jewish Voice for Peace.

Opinion
The Jerusalem Declaration’s Fatal Flaw
Though the JDA improves upon the IHRA definition of antisemitism, it falters in preserving a link between antisemitism and speech about Israel/Palestine.
Samer Abdelnour
Opinion
Why I’m Traveling to Alabama
Unions built our country. Now, we need to build them.
Jamaal Bowman