Who Owns the Orange? 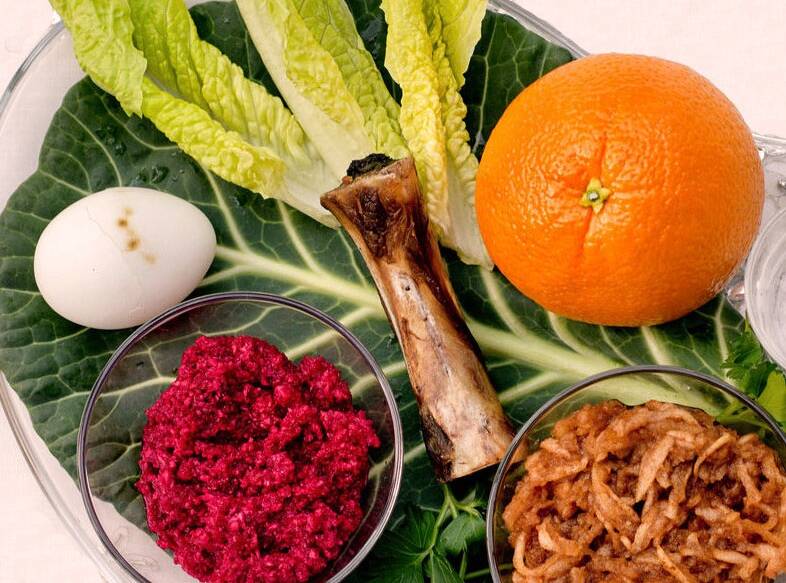 My mom and I first saw an orange on a seder plate at a feminist seder organized by Ma’yan, the Jewish Women’s Project of JCC Manhattan. We were both enchanted by the symbol, but it was especially meaningful for her: it represented women’s inclusion in Judaism, something she couldn’t have imagined as a girl growing up in an Orthodox community, where men and women sat separately at shul, where men said the kiddush while women served the meal. This feminist seder was nothing less than a revelation: here, women were not only included, they were running things. Hundreds of women reclined around dozens of banquet tables at a big catering hall in downtown Manhattan, and Jewish singer-songwriter Debbie Friedman provided the soundtrack for a different story of our exodus from Egypt, a story that highlighted the heroic contributions of women. It was the first time we heard about subversive midwives Shifrah and Puah, and the first time we joyfully picked up a timbrel (each banquet table was provided with tambourines) and sang “Miriam’s Song,” Friedman’s ode to Miriam’s fearless leadership.

My mom and I had never encountered by-women-for-women Judaism before, and that orange was a way to bring the experience home with us. As a teenager, I was inspired by this big, bright, unruly symbol. There was no divot meant to hold it on the seder plate, and it rolled around freely. The orange taught me that traditions are malleable, that women can make space for themselves.

The symbol was privately meaningful to me, but as I began to invite more friends who were unfamiliar with Jewish traditions to celebrate Passover, I realized I didn’t have a good way of explaining it or integrating it into the seder. I knew the story behind it: the tradition took hold after a rabbi in Miami Beach declared that “a woman belongs on the bimah like an orange belongs on a seder plate.” But there was nothing written about the orange in the haggadah I used, and it didn’t play an active role in the seder—it was never lifted up, pointed at, or explained like other ritual foods—it just sat there on the plate. So a few years ago, I decided I’d research its meaning.

That’s when I found the articles—stories with headlines like “The Real Story Behind the Orange on the Seder Plate” and “Orange-on-Seder-Plate Tale is Flawed, Feminist Says.” Reading them, I discovered that there was no Miami Beach rabbi. The ritual was actually invented by Dr. Susannah Heschel, a professor of Jewish Studies at Dartmouth. Heschel has spoken out many times in recent years to set the record straight: not only does the incorrect story give a fictional man credit for her idea, it also erases the original significance of the ritual—the orange was invented as a symbol of lesbian inclusion, not women’s inclusion or feminism.

It shocked me that a ritual I performed every year meant something different than I thought it did. As a bi person and someone with dear friends who are queer and trans, queer inclusion is important to me; it’s in the fabric of my daily life. When I realized I’d been performing a ritual meant to honor queer inclusion for nearly two decades without knowing it was meant to honor queer inclusion, I felt betrayed—why was this history not passed down to me?—and upset that I’d been unwittingly complicit in replicating gay erasure.

Heschel’s frustration mirrors my own: “What horrifies me,” she tells me, “is to see how the idea I had was almost immediately ‘translated’ into the voice of a man, how the queer purpose was utterly erased, and how people today assume it’s a custom that doesn’t require a political commitment.”

Heschel came up with the tradition when she was a graduate student at the University of Pennsylvania in the early ’80s. During a visit to Oberlin, she saw a haggadah that suggested putting a crust of bread on the seder plate to represent the inclusion of lesbians in Judaism. She liked the idea, but not the bread. “Bread on the seder plate . . . renders everything chametz, and its symbolism suggests that being lesbian is transgressive, violating Judaism,” she explains in a 2011 email to Rabbi Andrew Sacks. “I felt that an orange was suggestive of something else: the fruitfulness for all Jews when lesbians and gay men are contributing and active members of Jewish life.”

When she went back home to New York for Passover, she introduced the orange at her family seder: “I told everybody to take a segment of the orange, make the bracha for fruits, and eat it out of solidarity with gay and lesbian Jews and spit out the seeds of homophobia.”

In Philadelphia, she shared an apartment building with students from the Reconstructionist Rabbinical College. She developed friendships and started a Rosh Chodesh group with feminist and lesbian students, including Julie Greenberg, who is now a rabbi in Philadelphia. “Part of my own development as a feminist came in those days from having these women friends, these lesbian friends,” says Heschel. “It’s thanks to those friendships and our conversations that [lesbian inclusion] was an issue on my mind, that the orange became what it did. It was not only out of solidarity with gay and lesbian Jews, but specifically, solidarity with my friends, like Julie.” At the same time, its meaning extended beyond Heschel’s friendships. “You could say that the orange on the seder plate was a gesture to Stonewall in the Jewish world,” she adds. “It’s about being visible.”

Over time, the orange’s meaning started to shift. Last year, New York Times columnist Nicholas Kristof referenced the apocryphal Miami Beach rabbi story in an article about female religious leaders. Heschel wrote a letter to the editor correcting his mistake, and received a reply from Kristof’s assistant, who happened to be Zoe Greenberg, daughter of Julie Greenberg, one of the women who inspired the ritual. “I told Zoe, the orange is specifically in solidarity with gay and lesbian Jews, transgender Jews, and marginalized Jews,” says Heschel. “And she wrote back and said, ‘well it has become a symbol for women’s equality.’”

There’s some truth to that: every Passover, thousands of women place an orange on their seder plate to symbolize women’s inclusion in Judaism, just like my mom and I did. “The people who invented this rabbi in Miami Beach story, in a way they won,” muses Heschel.

I tell Heschel I’ve been trying to figure out exactly how the tradition’s original meaning was lost. She points out that the answer is simple: a combination of sexism and homophobia. “This happens all the time to women’s ideas,” she says. “My experience is evidence of what may well have been going on for the last 2,000 years in Jewish texts.” As for the shift in meaning, she acknowledges that “people may be more comfortable with the feminist ritual than with a gay/lesbian ritual.”

She’s right, of course, but my curiosity isn’t satisfied. I want to understand the mechanics of the drifting significance. It must have shifted with immeasurable small-scale adjustments; I’m imagining them now, points lighting up on a map: In Philadelphia, perhaps, a woman who heard about the ritual from a friend of Heschel’s shares it at her seder, explaining the orange as a symbol of women’s inclusion, perhaps because some of her guests aren’t comfortable with lesbianism, or perhaps because she believes women’s inclusion is important, or perhaps because by the time she heard about the ritual, it was already about women’s inclusion; that woman’s cousin, visiting from Boston, passes it on as a feminist ritual to her Jewish women’s group; the women’s group in Boston likes it so much they write a haggadah that suggests putting a feminist orange on the seder plate; that Passover, 200 copies are distributed, circulating the new tradition at dozens of seders. It’s a strange and complicated game of telephone, subtly mediated by a combination of homophobia and an eagerness among feminists to claim the symbol as their own.

My mom and I were part of that game of telephone, too. The haggadah from the first Ma’yan seder we attended presents both versions of the ritual’s meaning on equal footing, explaining that some believe the orange means women’s inclusion while others believe it means lesbian inclusion. But the orange is only mentioned in the introduction to the haggadah; it’s absent from the text that’s typically read during a seder. I know we went home understanding the orange as a feminist symbol, but I don’t remember what was or wasn’t said about it that evening.

Did the Ma’yan seder omit the lesbian history? There are many reasons why it might have—perhaps because the feminist story fit their mission so perfectly, or because Debbie Friedman preferred to be discreet about her sexuality, or because there wasn’t time to explain both stories. Or maybe both stories were shared, and it was my mom and I who forgot about the lesbian history—after all, the women’s inclusion story was about us, we could relate to it, it felt empowering. Thinking about that possibility—the role my mom and I might have played in erasing the lesbian history of the symbol simply because the feminist interpretation spoke to us—helps me understand how the ritual changed over the years.

Although oranges were present at all of our seders, we never ate the fruit and spat out the seeds. This interactive aspect of Heschel’s tradition has faded along with its original meaning, and I believe it may hold the key to bringing that meaning back. In accordance with her instructions for the ritual, you don’t just witness the inclusion of lesbian and gay Jews, you participate in it: you taste how sweet it is and you do the work of protecting that group from hate by spitting out any seeds. Just as the charoset reminds us of the mortar and the salt water reminds us of the tears, the seder plate orange also leverages our sense of taste to make a lasting impression.

This year, I’m looking forward to passing around orange segments for the first time and making queer inclusion part of the Passover story. To my mom and many other women, the orange on the seder plate will always mean feminism, but I don’t think the two meanings are mutually exclusive. After all, what good is feminism if it doesn’t protect and make space for marginalized groups like lesbian Jews? And even those who feel a fierce loyalty to the ritual’s lesbian significance have to acknowledge that its true origin story is itself a feminist parable: a woman’s idea is taken from her, attributed to a man, and totally misunderstood.

For a printable Haggadah insert with instructions on how to perform the orange ritual as intended, click here.

Amy Berkowitz is the author of Tender Points (Timeless, Infinite Light, 2015). Other writing has appeared in Bitch, McSweeney’s, and Wolfman New Life Quarterly. More at amyberko.com.