What Marx Got Wrong

A new biography of the philosopher misses the shortcomings of the Marxist tradition. 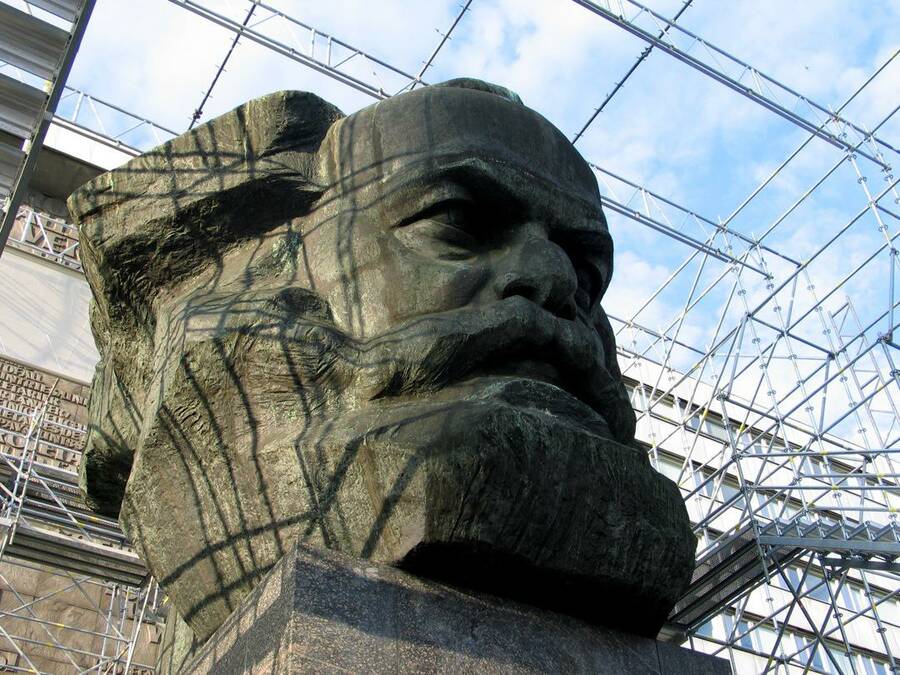 Discussed in this essay: A World to Win: The Life and Works of Karl Marx, by Sven-Eric Liedman, translated from Swedish by Jeffrey N. Skinner. Verso, 2018. 756 pages.

IN HIS A World to Win: The Life and works of Karl Marx, Sven-Eric Liedman tells us that he has spent more than 50 years reading and thinking about his subject; this hefty volume is clearly an act of love. Marx’s life is well if sketchily told, but A World to Win is more about the works than the life of Marx (the biography by Francis Wheen is the place to go if Marx the man is of interest, along with Yvonne Karp’s masterful Eleanor Marx). All of Marx’s major works and most of his minor ones are lucidly summarized and critiqued. The result is a volume that should serve as a guide for anyone interested in delving into Marxist thought in depth. The analyses are solidly grounded in the events of the day, as well as those of Marx’s life, from the carbuncles that tortured him while he was writing Capital; to the discord between Friedrich Engels and Marx while they were writing The German Philosophy, caused by feuding between their companions; to the ebbs and flows of revolutionary activity in Europe and the struggles within the revolutionary movement. This is a materialist biography of the great historical materialist.

Minor, flawed works, like the early The Holy Family, are treated seriously but briefly, while Marx’s never-completed magnum opus, Capital, is given the lengthy exegesis it deserves. This is characteristic of Liedman’s approach: Everything Marx wrote is treated as a work containing ideas worthy of reflection and discussion, including lesser-known works. Liedman makes a compelling case for reading Marx’s long critique of the relatively marginal Max Stirner in The German Ideology, demonstrating that it, and the book as a whole, though not published in Marx’s lifetime, are an essential step in the development of his thought, for in this book Marx and Engels “could develop in full scale their materialist understanding in contrast to Stirner’s idealist one . . . They could develop their view on the relationship between the state and capitalist economy, and they could even touch upon how the divisions of labor within art and science related to the one within society in general.”

This does not always mean that Liedman’s analyses are airtight. In his lengthy analyses of complex works like Capital and the Grundrisse (which together take up 120 pages of the book’s 627 of text), Liedman is fair to those interpreters of Marx whose readings differ from his own, but in other cases, he too often cedes to Marx’s own habit of slighting, belittling remarks about those who disagree with him. It’s especially unfortunate and surprising that Liedman surrenders to this temptation, since he writes some justly critical pages on Marx’s (and Engels’) tendency to personalize attacks, which led Proudhon, the father of anarchism, to implore him: “Do not become a new Martin Luther! . . . Luther had settled accounts with all Catholic orthodoxy, but soon created his own.”

This unpleasantness is an inescapable quality of Marx’s life. His correspondence is barely readable, so rife is it with vicious personal attacks, and any honest account of his activities cannot but depict Marx’s countless disputes, selfishness, and personal cruelty toward opponents within his own camp; Liedman, despite his love for Marx, takes care to show this. Marx was, after all, a man who lived off his wealthy friend Engels for most of his life, but who, when Engels’ partner died, wrote one line of condolence and then proceeded to ask for money from the grieving lover. Liedman, however, is too sympathetic when he describes the insults thrown around in the correspondence between Marx and Engels as those of “two rascals nonchalantly throwing insults about.” The playfulness implied in the word “rascals” has nothing to do with it: the letters are the works of two petty, mean-spirited men enamored of their own rightness and convinced of the idiocy of those who fail to see it. At all times, Marx felt himself to be the fount of all truth (an opponent called him the “Dalai Lama”) and directed insults and banishment toward any who disagreed. A telling example, as Liedman so correctly identifies, was Marx’s expulsion of two members of the Communist League whose ideas on revolutionary organization differed from his, an expulsion that occurred in contravention of the organization’s regulations. Even if Marx’s reasons were good, Liedman writes, “the manner of excluding those who hold different opinions can be seen as the start of a bad tradition.” The tradition of expulsion and ostracism would evolve from these relatively harmless beginnings to eventually be weaponized by the Bolsheviks and turned into a tool of annihilation.

IN NO SENSE A HAGIOGRAPHY, A World to Win does, however, fail a test in its discussion of Marx’s 1844 “On the Jewish Question,” indeed, on the whole question of Marx’s anti-Semitism and racism. No one reading the work can mistake its anti-Jewish overtones. Marx, after all writes that “The Jews have emancipated themselves insofar as Christians have become Jews,” i.e., admirers of Mammon; Liedman summarizes Marx’s ideas by saying that, “The everyday Jew devoted himself to endless bartering . . . [I]t was still Judaism, practical in its nature, that was victorious. Egotism permeated society.” In lines Liedman does not include, Marx wrote that “We recognize in Judaism, therefore, a general anti-social element of the present time, an element which through historical development—to which in this harmful respect the Jews have zealously contributed—has been brought to its present high level, at which it must necessarily begin to disintegrate. In the final analysis, the emancipation of the Jews is the emancipation of mankind from Judaism. The Jew has already emancipated himself in a Jewish way.”

Dismissing those who find Marx guilty of Jewish self-hatred, Liedman is willing to entertain the frivolous and patently absurd excuse that “On the Jewish Question” “has the form of what was called a Judenwitz—a ‘Jewish joke’—told by Jews among themselves.” This explanation collapses instantly, since “On the Jewish Question” was most decidedly not addressed by a Jew to other Jews. There is no reason to believe Marx even considered himself a Jew, despite his rabbinic ancestors. Marx and “On the Jewish Question” are clearly the opening salvoes in the ugly strain of left-wing anti-Semitism that was to have a long life. Liedman, sadly, employs the “some of my best friends are Jews” excuse to exculpate Marx, though he does admit his writings are full of slighting references to “Blacks, the Polish, the Irish, the Indians, and especially the Germans.”

One such reference is Marx’s description of one of his rivals in socialism, Ferdinand Lassalle, in an 1862 letter to Engels. “It is now quite plain to me—as the shape of his head and the way his hair grows also testify—that he is descended from the negroes who accompanied Moses’ flight from Egypt (unless his mother or paternal grandmother interbred with a nigger),” Marx wrote.

THOUGH LIEDMAN devotes dozens of pages to close examination of the more esoteric of Marx’s concepts and theories, defending them all ably, he never addresses what is clearly Marx’s central point and central error: the salvific role of the working class. Liedman defends Marx against the charge that he viewed history as inevitably unfurling towards a world where capitalism will be replaced by a higher, freer, form—socialism—where the new rising class, the proletariat (which he said would include the bulk of the population) will emancipate itself and thus society.

However much time one might spend in defending Marx’s theories on profit, on value, on wages, as Liedman does, none of this matters if the central element of the Marxist program—the social preponderance of the working-class and its assumption of power through its own actions—is a dead letter.

In the end, things have not panned out as foreseen, and technological progress and the global nature of capitalism, whose outlines Marx limned but whose current form Marx could not possibly predict, led to the destruction of the working class as a threat to the established order. It is certainly not a motor, either real or potential, for progress. No one can seriously consider the working class, reduced as it is in numbers and social prominence, as a force that will bring about the end of the iniquitous capitalist system.

The ideas of Herbert Marcuse and Cornelius Castoriadis, two of the most important left-wing critics of the idea of the workers as a revolutionary force, are never discussed in A World to Win. Castoriadis, a former Trotskyist who formed the small but influential group Socialisme ou Barbarie, would write during the May 1968 events in France that the workers were the most conservative force in France, having accepted a world in which they could afford cars, refrigerators, and private houses, retreating into what he called “privatization.” Marcuse, most famously in One-Dimensional Man, wrote the workers off entirely as revolutionary actors, real or potential, assigning that role to students and rebellious blacks.

This error of Marx’s, this misprision of the key actor in his tale, is the central, fatal flaw in Marxism, and is one that Liedman never addresses.

In the end, Liedman writes that it is not “Marx, the supposed systems builder” who lives on. Rather, the Marx who counts is the man found in Capital, and “He lives on as the great critic of capitalism.”

Accepting this to be true is a betrayal of Marx’s words, inscribed on his tombstone at Highgate Cemetery in London: “The philosophers have only interpreted the world in various ways; the point is to change it.” If Marx is just capitalism’s greatest critic and Marxism not a guide to revolutionary action, by Marx’s own estimation, it is nothing.