What Happened to the Black-Jewish Political Alliance?

Challenging the sanitized history of blacks and Jews during the Civil Rights era. 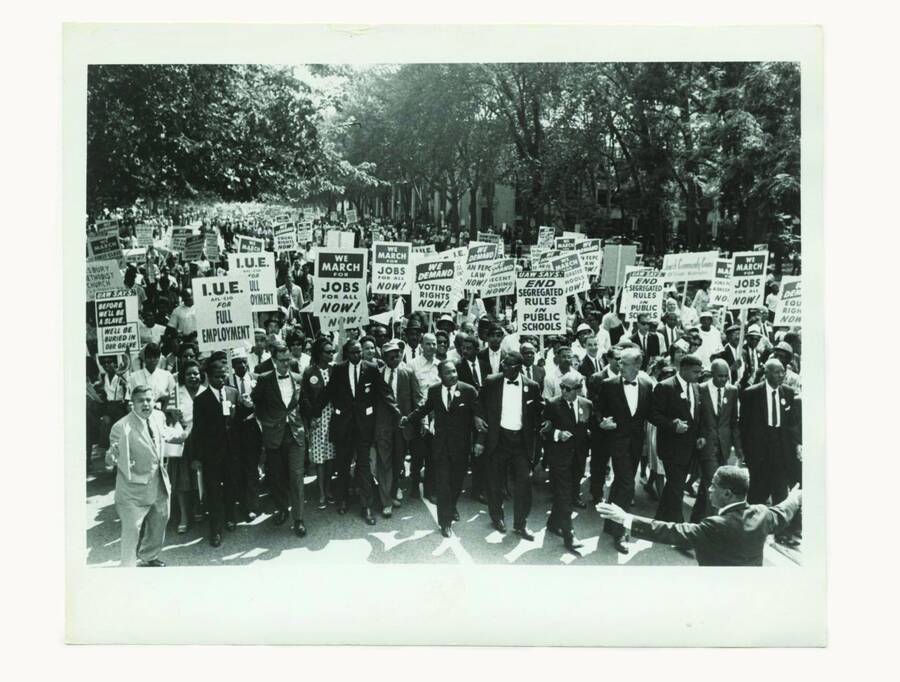 Rabbi Joachim Prinz (center-right, in sunglasses) marching with Dr. Martin Luther King Jr. at the 1963 March on Washington for Jobs and Freedom. Photo courtesy of the American Jewish Congress.

THE AMERICAN JEWISH COMMUNITY tells a very particular story about its history. We came over to the United States, mostly from Europe, as poor, often persecuted immigrants, and through a commitment to education and hard work, we rose collectively to seize the American dream. We especially like to highlight our commitment to civil rights and the African American struggle in the 50s and 60s, and in the decades thereafter our energized commitment to the state of Israel. While most Jews acknowledge that yes, things appear less harmonious today between blacks and Jews, we don’t dwell too long on those details. And besides, we learn, it was African American separatists who turned their backs on the interfaith work anyway.

In Black Power, Jewish Politics: Reinventing the Alliance in the 1960s, Marc Dollinger, a historian in the Department of Jewish Studies at San Francisco State University, tells a very different kind of story. After scouring primary sources from the era, he finds that Jews not only anticipated the splintering of the great interfaith, interracial coalition years before it happened, they also acknowledged their responsibility for the split. What’s more, Jews benefited directly from it.

It’s not unfounded that most young American Jews grow up learning about the role Jewish activists played in the civil rights movement. Jews really were involved and supportive in ways that differed from other white subgroups. Polls from the era revealed that Jews were almost twice as likely as white Protestants to consider “racial inequality” the most important issue of the day, and over a third of Jewish respondents thought civil rights reform was “too slow.” Jews comprised at least 30 percent of the white Freedom Riders, lent critical financial support to organizations like the NAACP, and submitted amicus briefs in support of civil rights to the Supreme Court. In 1963, Holocaust survivor and Newark rabbi Joachim Prinz spoke just before Martin Luther King Jr. at the March on Washington, and in 1965, Rabbi Abraham Heschel famously “prayed with his feet” as he marched alongside King in Selma, Alabama.

Still, that’s not the full picture. Because despite their vocal support for the African American struggle, most Jews were not risking their livelihoods for black freedom in any real way. As Dollinger writes, Southern Jews embraced Dixie and were overwhelmingly silent on civil rights. Northern Jews took pride in their support for justice, but “most experienced that movement from the safety and comfort of their living rooms, where they read about direct-action protests in the newspaper or watched it on television.”

On top of their oft-exaggerated support, Jews actually began to retreat from the civil rights movement in the 1960s, a retreat documented at the time in a slew of confidential ADL memos authored by local regional leaders for the national office. While the leaders expressed concern over growing black militancy, “they also framed their assessment,” Dollinger writes, “. . . with a clear awareness of Jewish culpability in damaging relations with African American civil rights leaders.” One Buffalo ADL leader wrote that members of his local Jewish community felt blacks were “stirring things up too much.” Another leader overseeing the Arkansas, Louisiana, and Mississippi region wrote, “the Jewish community is not fully living up to its own power . . . [and] by and large do not get involved in the area of race relations.” These private conversations and acknowledgements eventually spilled over into the public. “The dirty little secret of our community after all,” Dollinger quotes a Jewish activist saying to the Synagogue Council of America in 1969, “is that its leaders have always spoken more forcefully and radically than its followers have felt.”

This recognition of the partial blame Jews shouldered meant that when African American leaders began voicing frustration with their Jewish allies, tired of their gradualism and paternalism, Jewish leaders often conceded those critiques had validity. And when some of those African American frustrations veered into outright antisemitism, Jewish leaders tended to minimize the prejudice. “Embracing the era's emerging analysis of power relations, they differentiated between antisemitism, which posed relatively little risk to the continued social mobility of American Jews, and racism, which continued to limit African American advance,” Dollinger writes. It’s hard to fathom American Jewish leaders issuing such measured responses to black antisemitism today. Consider the Jewish establishment’s fixation with pressuring black leaders like Keith Ellison or Women’s March co-founder Tamika Mallory to disavow Louis Farrakhan and his greatly diminished Nation of Islam.

A central tenet of Black Power, Jewish Politics is that as this political rift opened between blacks and Jews in the late 1960s, as black activists began organizing more exclusively by and for black Americans, the space for Jews to organize by and for Jews in the United States widened, too. This then enabled Jewish leaders to build a new kind of narrative for the Jewish community, one of “Klal Yisrael.” Sometimes that meant flooding the streets and Capitol Hill on behalf of Soviet Jewry and the State of Israel. Sometimes that meant organizing for more explicitly Jewish institutions in the United States like an expansion of Jewish day schools. (There were 35 Jewish day schools in 1940, with that number rising to 323 by 1965, and 425 by 1973.) Jews began to publicly lean into identity politics in a way that before would have felt unkosher, too vulnerable to charges of dual loyalty. “Black Power proved quite good for the Jews,” Dollinger quips at one point.

Neoconservative intellectuals helped bolster this new framework of Jewish community. In 1971, Nathan Glazer, a former Commentary magazine editor, argued that Jewish dissidents who challenged this newfound unity around Israel (and anti-communism) displayed “anti-Jewish tendencies.” That same year Norman Podhoretz argued in Commentary that Jewish radicals who challenged the communal consensus were actually committing acts of antisemitism. As Jews drifted further from their roots of interracial, interfaith solidarity, they adopted the language of solidarity more exclusively and dogmatically for themselves.

Today, rather than teach young Jews the different ways Jewish Americans responded to the civil rights movement—including both inaction and opposition—we opt for a sanitized picture that obscures the complex racial, economic, and geographical dynamics of the period. Rather than teach how Jewish and black leaders during the civil rights era recognized the often challenging power dynamics between the two communities, American Jews teach a glorified history of Jews as brave, selfless allies, motivated by our sense of tikkun olam, unfairly spurned by black nationalists later on. Just this past spring James Kirchick penned an essay in Commentary echoing this narrative, touting Jewish involvement in the NAACP and the civil rights movement, and how “perplexing and painful” it was when black separatist movements like the Nation of Islam and Black Panthers grew in power, espousing a “Third Worldist ideology” and “anti-Israel (and often anti-Semitic) rhetoric.”

Meanwhile, the ADL is hardly on the front lines of the civil rights movement anymore. Beginning in the 1980s, as American Jews continued to climb the economic ranks and assimilate into white society, the group’s approach shifted away from overt political advocacy toward providing educational resources and workshops for combating racial bias and discrimination. Today the ADL goes so far as to sponsor annual trips to Israel for US law enforcement to learn from and train with Israeli police and military officials. While the organization casts these experiences as opportunities for enhanced counterterrorism efforts, it’s hard to defend equipping American police with the discriminatory tactics deployed by an occupying army.

Unfortunately, in the name of Klal Yisrael, we’ve simultaneously thwarted intellectual growth in our community and hindered real accountability. While there is greater individual reckoning on the part of Jews with the power dynamics between ourselves and African Americans, our engagement in solidarity activism rarely examines our community’s power and wealth. This past summer, Rabbi Rick Jacobs, president of the Union for Reform Judaism, gave a speech at the tail end of the Poor People’s Campaign, saying that “Jewish tradition teaches us that poverty is the greatest issue facing our society.” While Jacobs is right to publicly highlight the issue of poverty, we in our community know that many wealthy American Jews—including those who belong to Reform congregations—oppose massive redistribution of wealth, and rarely have to answer for it.

And rather than teach the rich tapestry of dissent and debate over the question of Jewish self-determination, we teach absolute support for Israel, as if questions around a Jewish nation-state have not only been settled, but were never really debated at all. Within our communal institutions, we censure voices that seek to stigmatize those with wretched politics and exorbitant wealth. It’s why mainstream Jewish organizations continue to ingratiate themselves at the feet of billionaires like Sheldon Adelson.

This ideal of communal consensus is seductive and reassuring, as is emphasizing aspects of our history in which we can take pride. But it has prevented a real honest reckoning with Jewish history and Jewish power, and at whose expense our power has come. Books like Black Power, Jewish Politics are a bold first step toward such a discussion.

Rachel Cohen is a Washington, DC-based freelance journalist and a contributing writer for Jewish Currents. 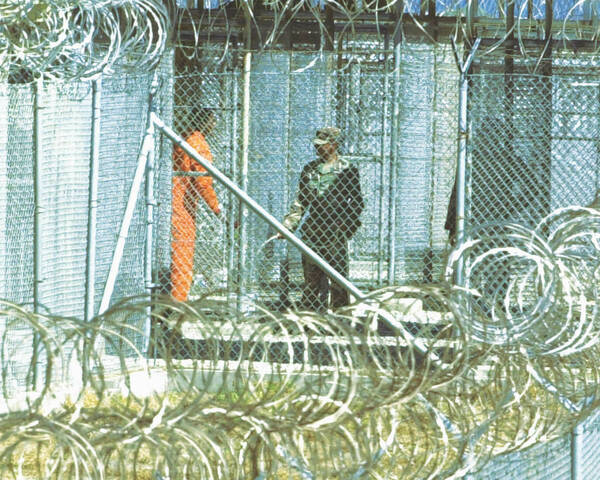