The TikTok Generation Takes to the Streets of Jerusalem 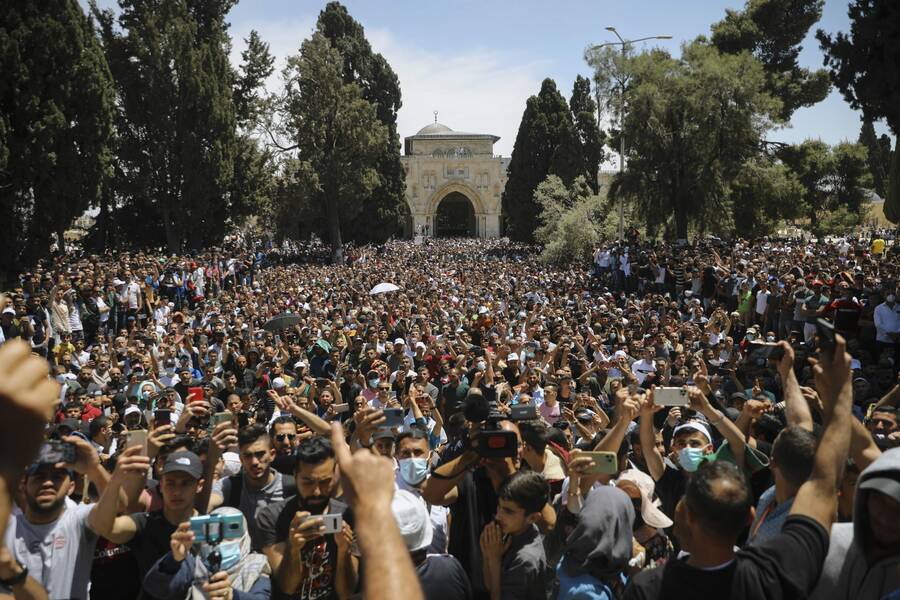 Worshippers chant slogans during a protest against the expulsion of Palestinian families from their Sheikh Jarrah homes at the Al-Aqsa Mosque compound in the Old City of Jerusalem, May 7th, 2021. Photo: AP Photo/Mahmoud Illean
Tweet Copy Link Email Print

For the past decade, the organization Grassroots Al-Quds has been a hub of Palestinian organizing in Jerusalem (also known by its Arabic name, Al-Quds). The group supports local Palestinian communities in their struggles to resist their ongoing violent displacement by the state; it also studies the history of the city’s varied Palestinian neighborhoods and offers tours and research aids to the public. Besides this on-the-ground work, the group has played a crucial role in communicating with organizers across and beyond the Arab world about the struggles of Palestinians in Jerusalem. Grassroots Al-Quds members have taken part in many of the protests that swelled in the Sheikh Jarrah neighborhood earlier this month in response to the attempted expulsion of Palestinian families from their homes, and have been an important source of information about conditions on the ground. A few days before the current ceasefire between Israel and Hamas, I spoke with Fayrouz Sharqawi, the director of Grassroots Al-Quds, about the group’s work and the events of the past few weeks.

Dana El Kurd: Can you tell us about the work of your organization?

Fayrouz Sharqawi: It often feels like everyone has a say in Jerusalem’s destiny, except for the Palestinians living in it. The goal of Grassroots Al-Quds is to serve as a platform for Palestinians to make our own long-term strategies for the city. So we research Jerusalem's history, the stories of Palestinian communities—including the ones that were ethnically cleansed in 1948—and the Israeli policies of displacement deployed against them. We believe this information can serve as a tool for mobilization, helping to create networks between fragmented communities and organizations so there can be a Jerusalem-wide conversation about how we, Palestinians, envision the city.

DEK: Does anything feel different to you about this current round of Palestinian mobilization?

FS: I feel like it is stronger and wider, because it started in Jerusalem, which is being suffocated quietly. This past year, the combination of the pandemic and colonization has been lethal. Palestinian families have been suffering from poverty and [lack of] health services, and colonization has intensified—more homes have been demolished in the past year, more lands confiscated. Many colonial projects were implemented at an even faster rate: There are now four new lines under construction for the Jerusalem Light Rail, so there will be a line running between Hebrew University on Mount Scopus [in occupied East Jerusalem] and [the East Jerusalem settlement of] Gilo, connecting these colonies.

I think these conditions led to a louder protest and bigger presence in the streets. The tear gas, the sound bombs, the beating up of Palestinians, the rubber-coated bullets aimed at faces, taking out eyes—these all came as usual. But I think this time, the Palestinians of Jerusalem showed greater unity and support for each other.

I also think we need to hail the young generation. I’m almost 40, I’ve been living in Jerusalem for 20 years, and it's obvious to me that the people in the street are younger than ever before. We should all feel so proud of this TikTok generation. Everyone laughed at them; the Israeli occupation authorities counted on them not being politically aware, on their being detached from the older generations and their struggle. But they are the ones leading the protection of Jerusalem. These are the kids who have been hearing bombs and smelling gas and seeing people beaten and arrested and shot their whole lives. I think they are simply fearless.

DEK: How are people finding each other? How did new people come to Sheikh Jarrah or the Damascus Gate, especially from Palestinian communities within the Green Line?

FS: The families in Sheikh Jarrah managed to bring many Palestinians to stand with them in their neighborhood, using social media to create a storm around their story. [23-year-old twin siblings and Sheikh Jarrah residents] Mohammed and Muna El-Kurd did great media work. They were very clear with their messages and persistent with their posting and sharing and mobilizing media and journalists. I think that was the main reason why Palestinians from as far away as the Galilee came for the protest. I think there is a thirst among Palestinians to be there, because we all realize this is not just about Sheikh Jarrah—this is about every Palestinian in Jerusalem. Many have been expelled, and many will continue being expelled, unless we stand together each time there is one house under threat.

DEK: Are there emerging discussions about what the best tactics are moving forward?

FS: There isn’t one group of people making decisions, and that’s what is so great about this moment in Palestine. It’s similar to the First Intifada, when popular committees emerged to respond to specific needs and urgencies. Now, too, committees have been created in Haifa and Lydda, and also here in Jerusalem, where Israeli so-called civilians have attacked Palestinians. (I hesitate to call them civilians because they’re all armed ex-soldiers.) For instance, more than 800 people have been arrested [within the Green Line], and a group of lawyers has been organizing to follow up with each person who was arrested, keeping track of their court hearings and bail and being in touch with their family. Another example: Last Friday, in the West Bank, there were huge confrontations [between Palestinian protesters and the IDF]—a lot of live ammunition used, a lot of injuries. Around Nablus, hospitals were overcrowded, and the army was blocking the roads to get to them. And a call went out to doctors and nurses and medics in Aqraba, a small village, and suddenly there was a whole field clinic there treating injuries.

So our people are aware of this need for mutual aid. It makes me think of many great Arabic words that I’m not sure I can translate into English, like faz’a—urgently coming to someone’s aid. Or ’awna—mutual help and dependability.

DEK: Do you see any relationship between the Jerusalem protests and the delayed Palestinian Authority elections? Was there any kind of youth energy that was diverted from the elections to the protests?

FS: I don’t think so. Especially for Jerusalemites, the elections are slightly irrelevant to Palestinian lives. (I, for one, don’t believe that we should even have Palestinian elections: I think it creates the false image of sovereignty.) But I don’t think the younger generation was even following the news about the elections. They already know that the PA is a big lie, a bluff—and an obstacle. You can see so many videos online where PA officials show up to an event, like the mourning of a martyr, to show off, to be on camera—and then the young people come out and tell them to go away, that they are not welcome.

DEK: That was the impression I got as well. And it seems like on the ground, there might be political party operatives—there might be somebody from Fatah or Hamas at Al-Aqsa—but they're not leading. They’re participating.

FS: They are totally absent from Jerusalem. This was the case all through the year and also during the [protests]. I think that it says a lot about how irrelevant they are—how they’re not part of the equation for people, especially in Jerusalem.

DEK: What are the immediate challenges going to be in the next days and weeks? We have the strike, we have all these people being arrested. We still have the threat of lynch mobs. How do you see some of the challenges, and how do you see people on the ground facing them?

FS: As a Palestinian, you are always at risk of being physically attacked, because we are colonized and occupied. But today, it's not just the army butchering us; there are a lot of these Israeli so-called civilians too. Just yesterday, three guys were shot down the street outside my window in Shufat. People are afraid of lynching, of mobs attacking them. People are organizing shifts to protect each other. There are calls for people not to walk alone, to be in groups, to always have pepper spray or something for self-defense. I think the huge amount of arrests are only going to increase, and that we need to mobilize around that as a community.

FS: Of course. One thing I like about the terms we use in Arabic is that we don’t even call them “prisoners”—we call them aseer, “captives,” because they are war captives, captives in occupation and colonization. We need to be there for them, just like people showed up outside the court when there was a hearing for [protesters in] Sheikh Jarrah. We need to tell them that we are not neglecting them, that they are not going to pay the price alone.

DEK: We’ve seen similar moments of resistance recently—for example, in 2014 and 2017. Would you say that these moments have been cumulative?

FS: Definitely. I think 73 years of accumulation are in play here. And I think, in some ways, things won’t regress from here. There are certain things we will not have to explain again. I think that we need to take the momentum we have now to keep open the conversation, to keep building bridges between the fragmented parts of Palestine.


Dana El Kurd is a researcher at the Arab Center for Research and Policy Studies, and an assistant professor at the Doha Institute for Graduate Studies. She is the author of the book Polarized and Demobilize: Legacies of Authoritarianism in Palestine. 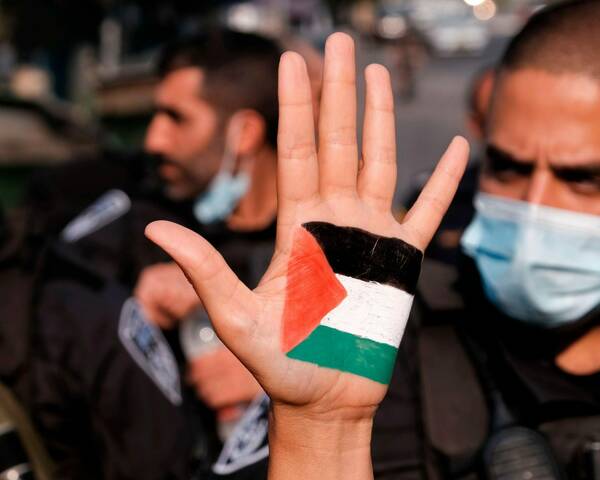 Conversation
For the Sake of Truth
Poet and activist Mohammed El-Kurd discusses his debut collection, the vexed meanings of visibility, and the long history of Palestinian freedom struggles.
Claire Schwartz
Conversation
Selling the Holocaust
Three writers and grandchildren of Holocaust survivors, including Plunder author Menachem Kaiser, discuss the conventions of the “3G memoir” and the commodification of Holocaust stories.
Arielle Angel, Maia Ipp, and Menachem Kaiser

Conversation
The Palestinian Cause at a Moment of Transition
On the eve of the Biden administration, after the manifest failure of Oslo, four Palestinian thinkers ask: Where do we go from here?
Inès Abdel Razek, Salem Barahmeh, Dana El Kurd, and Fadi Quran
Sign up for our email newsletter, featuring exclusive original content