The Sound of Messianic Time

Yo La Tengo’s new drone album, released into the formlessness of quarantine, evokes the unfulfilled waiting of Jewish messianism. 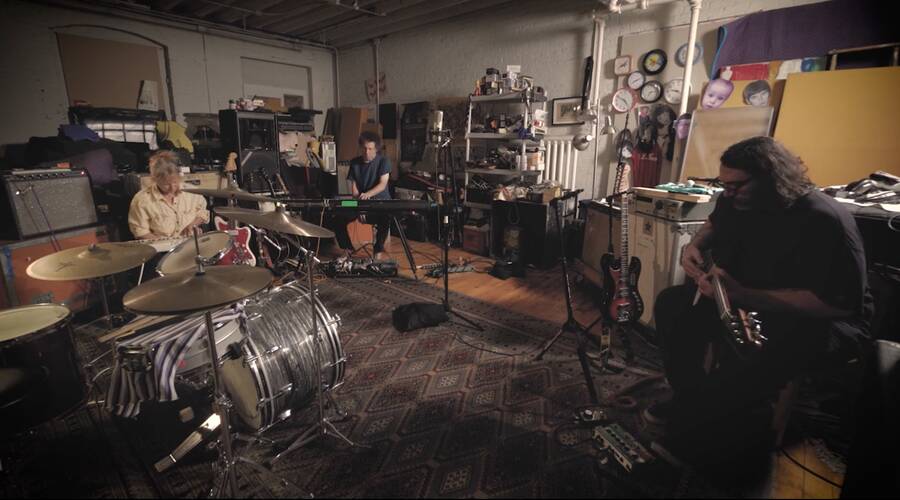 AT THE END OF JUNE, deep into quarantine, my wife and I watched Andrei Tarkovsky’s Stalker. The haunting, numinous film is slow-going; in his short book about it, Zona, the writer Geoff Dyer describes it as “almost devoid of action.” Stalker follows three men on their sojourn into “the Zone,” a forbidden territory marked by a mysterious extraterrestrial encounter. Danger lurks at every turn. Somewhere, there’s a room that will fulfill one’s deepest desire. As the trio wanders this uncanny terrain, a dull dread—or, at mentions of the wish-granting room, flickering hope—gradually escalates, but never culminates. The film continually denies fulfillment, pushing the viewer back into an experience of anticipation.

Normally, waiting is a dreary way to spend time—especially awaiting the arrival of something that feels as if it will never come. But Tarkovsky also understood precisely how arresting interminable expectation can be; generating this experience was a key part of his cinematic style. “If the regular length of a shot is increased,” Dyer quotes the director in Zona, “one becomes bored, but if you keep on making it longer, it piques your interest, and if you make it even longer, a new quality emerges, a special intensity of attention.” Indeed, watching Stalker, we found ourselves bored into absorption. The film, which we’d already come to feeling listless, lulled us into a new, unexpectedly rejuvenating relationship to the uneventful eternity of pandemic time.

I found a similar source of respite a few weeks later, when the indie rock band Yo La Tengo released an EP, recorded during the quarantine period, called We Have Amnesia Sometimes. Like Stalker, the brief album generates an overwhelming sense of unfulfilled anticipation. Drawing on Yo La Tengo’s decades of experimentation with guitar feedback, humming synthesizers, and meditative repetition, it pushes as far away from the melodic and structural constraints of pop music as the band has ever gone, marking a clear shift into drone, a genre characterized by slow, saturated noise. The techniques of the genre, much like Tarkovsky’s interminable shots, bring one into an unsettling yet restorative encounter with time.

I’ve been thinking about this encounter as it relates to the tradition of Jewish messianism, in which unfulfilled waiting is the paradigmatic experience. In the most compelling modern formulation of messianism, Franz Kafka’s parable “The Coming of the Messiah,” Kafka tells us that the Messiah “will come only when he is no longer necessary; he will come only on the day after his arrival; he will come, not on the last day, but on the very last.” In this vision, the unredeemed await a redeemer whose arrival is always just out of reach. It seems a cruel sentence, one viscerally familiar to us now, with reopenings constantly deferred—and yet it also tantalizingly suggests that the Messiah’s arrival lies latent in its very absence. The temporality of Jewish messianism—and art that evokes it—offers a way to understand a span spent waiting not as wasted time, but as itself a source of meaning.

FOR YEARS, Yo La Tengo has put on eight-night runs of Hanukkah shows featuring special guest performers, rare cover songs, and often an electronic chanukiah (they also recently curated a Hanukkah album, which includes HAIM doing Leonard Cohen and Jack Black performing “Chad Gadya”). But when asked about their Jewishness, the band’s guitarist Ira Kaplan and drummer Georgia Hubley, a married couple, usually emphasize that they’re ardently secular. (Yo La Tengo’s third member, bassist James McNew, is not Jewish.) Still, the band has long hinted at an appreciation of the spiritual realm. The 2000 album And Then Nothing Turned Itself Inside-Out, for instance, takes its title from a chant on a 1979 recording by Afrofuturist experimental jazz legend Sun Ra that sounds like a kabbalistic gloss on Genesis: “At first there was nothing . . . And then nothing turned itself inside out and became something!”

Yo La Tengo pursues this interest in the spiritual throughout their new album. The metaphysical resonance of We Have Amnesia Sometimes was clear from the moment they released its first track, “James and Ira demonstrate mysticism and some confusion holds (Monday).” The song’s unwieldy title references the day of its release while pointing toward its ambience and opacity; the track is organized around a shimmering, slowly modulating hum that ultimately consumes it. In a playful note accompanying “James and Ira,” Kaplan explained that, after a hiatus at the outset of quarantine, the band began meeting again at their rehearsal space in Hoboken, New Jersey, and “playing formlessly.” This was not unusual on its face; most Yo La Tengo songs have been born from such improvisational sessions and refined later. But this time, the band began taping their session “in case [they] stumbled on something useful for the future”—then decided to release the recording as it was. In the context of a global shutdown, the difference between “practicing” and “performing” seemed to fade away. As Kaplan put it drily, “what would we be practicing for.”

The band’s shift toward formless experimentation was underway well before the current quarantine. Yo La Tengo’s 2018 album There’s A Riot Going On featured a number of long, ambient songs and introduced the idea of fluidity between rehearsal and finished project (marketing copy noted that the band had “turned on the recorder and let things coalesce”). But We Have Amnesia Sometimes more fully leaves pop behind, embracing instead the techniques of drone. Where pop songs tend to repeat dynamically—for instance, in the alternation between chorus and verse—drone music often repeats monotonously, suggesting then annulling the possibility of variation. We hear this in the fuzzed-out, pulsing bass that drives the aimless march of “Georgia considers the two blue ones (Thursday).” Surges of feedback and noise, like the sputtering roar that overtakes “Georgia thinks it’s probably okay (Tuesday),” create a similar sense by suggesting and then negating a resolution into tunefulness. The most familiar technique in the drone arsenal is the use of sustained tones and chords, like the washes of bright guitar that hum over “Ira searches for the slide, sort of (Friday).” The fundamental motion of melody is toward a key’s tonal center. Melodies heighten and indulge our longing for this resolution; drone defies this desire, protracting while resisting the tonal pull.

Drone effects have been used in sacred music traditions around the world for thousands of years, though not typically, as it happens, Jewish ones; the closest cousin might be the niggun—a wordless, repeated vocal refrain, whose effect is less monotonous than ecstatic—used in Hasidic spiritual music. But to my ear, drone is a particularly apt aesthetic vehicle for the indefinitely extended temporality of Jewish messianism, an idea with a religious lineage stretching back centuries. In the Talmud, Rabbi Shmuel bar Nahmani discusses the proper relationship of the Jews to the Messiah’s arrival. Quoting Rabbi Yonatan, he chastises “those who calculate the end of days”; such people, he warns, tend to falsely aver that if the Messiah has not arrived at the time of their predictions, then “he will no longer come at all.” Instead, he cites an injunction from the Book of Habbakuk, a minor prophet, regarding the fulfillment of a prophecy: “Though it tarry, wait for it.” Maimonides later weighed in, placing the correct orientation toward the Messiah among his 13 “foundational principles” of Judaism. A faithful Jew believes in the Messiah and does not “think that he is late,” Maimonides writes—but then he too goes on to imply that the Messiah, much like the missing resolution in a drone song, “tarries.”

How can one whose coming is delayed not be late? Perhaps because this belatedness is precisely his appointed time; he will come, not on the last day, but on the very last. His role is to tarry, and ours is to wait—an obligation ritualized through prayer and spiritual practice. In Ani Ma’amin—a rearticulation of Maimonides’s credos commonly recited at Jewish services—the sage’s view of the Messiah comes to focus on this act of waiting: “I believe by complete faith in the coming of the Messiah, and even though he tarry in waiting, in spite of that, I will still wait expectantly for him each day that he will come.” For Hasidim, waiting for the Messiah with total devotion came to be understood as one of the highest mitzvot, so spiritually significant that some considered it better to be an otherwise uneducated expert in the art of waiting than to be a strictly observant tzaddik.

Yo La Tengo’s turn to the messianic genre of drone is fitting for a moment in which we’re all awaiting the arrival of something that feels as if it will never come: a vaccine; a coordinated, humane governmental response to the virus; the return of the relative fullness of our pre-quarantine lives—or, better, the dawn of a fullness that exceeds it. It’s difficult now even to imagine a day that feels much different than the last. In her essay “Exodus From Now”—written early in quarantine, as Passover approached—my colleague Arielle Angel described the “futurelessness” of pandemic time, or what cartoonist Emily Flake called “non-time.” Months later, this endless present stretches on, forcing us all to learn how to live in it, to find a new time latent in the non-time. We might turn to pop music for structure, fulfillment, completion, but We Have Amnesia Sometimes gives us something else: quarantine time—formless, unvarying, without culmination—transformed into an enthralling aesthetic experience. Futurelessness not denied, but redeemed.

Two days after the album’s release, I attended a live-streamed performance the band broadcast from the same rehearsal space where it was recorded. The short set didn’t include the songs from the album, but mirrored its style: swelling and simmering washes of formless synth and guitar. As the show came to a close, it struck me that I’d experienced something steeped in but also counter to quarantine time. A show, like a ritual—or an album, or a film—is a bounded event. Time elapses; the future arrives. Because the slow, uneventful eternities of Stalker and We Have Amnesia Sometimes unfold in finite time, each allows access to an experience of unceasing expectation that, within the bounds of the work, can begin and end. The promise of a conclusion frees us to inhabit the waiting in all its richness—monotony gives way to the sublime—before we return to the unbounded, abyssal present, where there’s no end in sight.

Nathan Goldman is the managing editor of Jewish Currents.

Newsletter
The Conglomeration of Literature
The antitrust case against Penguin Random House’s acquisition of Simon & Schuster has reignited longstanding anxieties about corporate consolidation in publishing.
Nathan Goldman
Newsletter
Can Minneapolis Reimagine Policing?
A proposed new department would include professionals like mental health workers alongside cops.
Nathan Goldman
Sign up for our email newsletter, featuring exclusive original content
Short on time?
Sign up for our weekly Monday roundup of everything you missed in Jewish Currents last week.