The DOJ Fired Me For Protesting Family Separation. I Don’t Regret It.

Speaking truth to power is necessary to force political change. 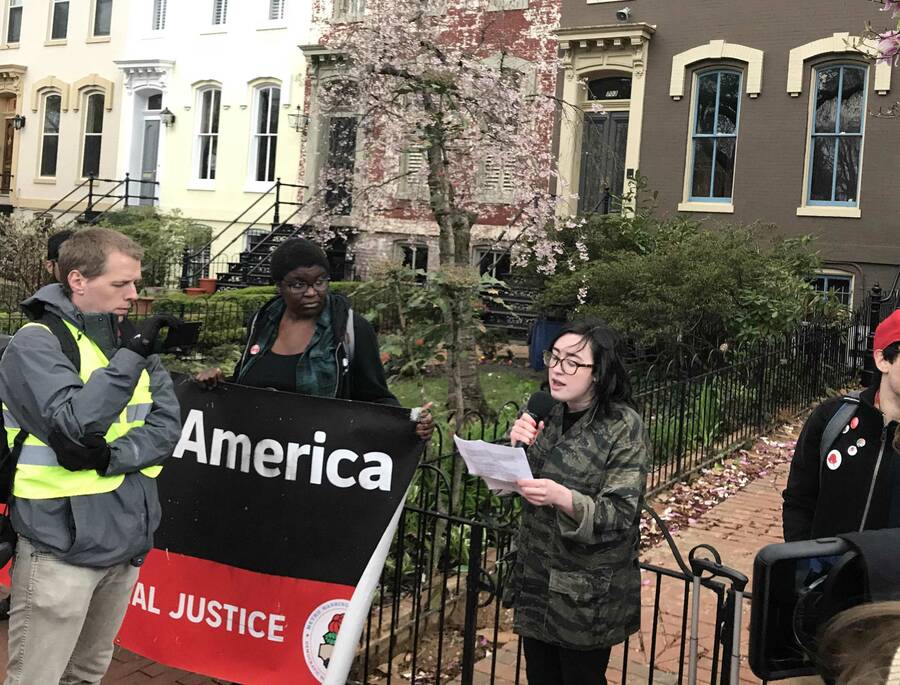 ON JUNE 19th, after getting home from my job at the Justice Department, I had already changed into sweats and started cooking dinner when I got a text: “DHS Secretary Nielsen is having dinner at MXDC. Can we get like 5-10 people there to crash?”

The previous day, Secretary of Homeland Security Kirstjen Nielsen had given a press conference where she insisted family separation was “not a policy” and that it was “not possible as a matter of law to detain and remove whole family units who arrive illegally in the United States.” Though it may not have been “possible as a matter of law” in Nielsen’s view, it had already started happening: beginning in October 2017, hundreds of children had been taken from their parents upon arrival at the US border and relocated into holding camps.

After a moment’s thought, I replied to the text message and said I could be at MXDC, a Mexican restaurant a block away from the White House, in 30 minutes. A few other friends quickly agreed to show up, and one found signs left over from previous anti-deportation protests. I was the last to arrive, and by the time I got there it was clear we didn’t have much of a plan. We agreed we’d walk over to where Nielsen was sitting. And we would tell her what we knew: separating families who cross the border is worthy of shame. You likely already know what happened next: our group confronted Nielsen, who was surrounded by security guards, about the family separation policy and DHS’s other abuses.

In the days following the protest, our names and faces were splashed across Reddit and cable news, our lives were autopsied, our personal connections laid bare. Someone left my mother a voicemail that said it was too bad my father was dead, because he could have slapped some sense into me. A man from Washington DC called me on Facebook Messenger fives times in a week, at one point sending an audio message of what sounded like gunfire.

I was a good target because of my work as a paralegal at the DOJ’s Antitrust Division. People seized on the idea that I worked for the same federal government as Nielsen, ignoring the fact that my job was to protect American consumers from abuse by businesses. My days at work sometimes involved researching corporations or interviewing executives, but were more often filled filing attorney emails, writing up memos of attorney calls, and scanning cover letters. I was a small part of the six cases I worked on, but those cases meant a lot to me: my hours in that windowless office helped enforce rules that ensured monopolies and cartels could not take over our economy.

On September 18th, I faced the first serious consequence for showing up that night. Assistant Attorney General Makan Delrahim, a Trump administration political appointee and my boss’s boss’s boss’s boss, was “troubled” by what I’d done. Although I had been cleared by an internal inquiry nearly two months prior, and had a record of stellar performance reviews, Delrahim decided not to renew my term as a paralegal, effectively firing me. This was incredibly unusual: non-renewals happen to maybe one or two of the division’s nearly 100 paralegals a year. I was initially told that I’d have 14 days to close or pass on my work. But on September 24th, I arrived at work and found that my ID badge wasn’t working. I walked around the building to the visitor’s entrance and was greeted by the head of the paralegal program and a man from security. I knew what was about to happen, but both refused to say anything until we had taken an elevator up to a conference room. After telling me my term had expired on September 23rd and I had not, as I had been told, been given an extension, the program head then walked me to my office. Most of the staff wouldn’t arrive until later that morning, but she insisted we use the door that would take us past the fewest number of coworkers. My supervisor and the head of personnel then left me to pack up my office under the supervision of the man from security. I packed up the suits I kept in my office and quickly told another paralegal where he could find the files he’d need. Security escorted me out of the building and into unemployment.

The day after I was forced out of the DOJ, a FOIA release confirmed what we always suspected: despite denying that the policy even existed in June, Nielsen had signed off on an official family separation policy in April. We also now know more about what was done to the children torn from their parents: they were kept in unlicensed facilities, abused, or lost entirely. More than 180 children remain separated from their families.

The response from the right to my firing was predictable. Fox and Friends ran a segment this past Wednesday morning about a fundraiser to cover my medical costs. Project Veritas started a new campaign to fire me, though their well-documented incompetence meant it was launched a day after I’d already been given notice. Of course, Kirstjen Nielsen and everyone else involved in the torture of families and children has been allowed to live a peaceful life.

I went to MXDC that night because I know how destructive deportation is. It’s hard to say precisely when I realized this. It may have been during my first years in Arizona, where jokes about getting your papers checked became passé by middle school. It might have been in 2010, when the Arizona Senate passed SB1070, which required police to determine the immigration status of anyone they stopped. Or maybe it finally became clear in 2011, when it was reported that more than 5,000 children were put in foster care after their parents were detained and deported by ICE. I’m sure I already knew deportation was wrong when I arrived at a Nogales, Arizona border facility housing unaccompanied minors during the 2014 migrant crisis; still, I took a tour, saw children in cages, and then returned to a regular afternoon at my internship at Tucson’s Morning News. I never spoke about what I saw that day until I confronted Kirstjen Nielsen about it that night in June.

I’ve seen that speaking truth to power is necessary to force the Trump administration into changing their ways. The day after we confronted Nielsen, amid widespread outrage and activist pressure, the family separation policy technically ended (although many families have still not been reunited). A week later, a mother confronted Scott Pruitt at lunch shortly before his own resignation. And just this week, a group of activists in DC (one of whom attended the MXDC protest) confronted Ted Cruz about Brett Kavanaugh’s history of alleged sexual assault and abuse.

I’m not the first person to be fired for doing this work, and I will not be the last. But the answer to the abuses of political appointees like Delrahim, Pruitt, and Nielsen is not keeping your head down. Being appalled by the abuses of the deportation machine is not enough, and working many levels below the powerful isn’t a reason to say silent. I am not sure what my next job will be, and it’s possible it won’t be something I believe in, like my last position. Knowing all this, I would yell at Nielsen in a restaurant again in a heartbeat. I hope more of you join us when that time comes.

Allison Hrabar is a member of the Metro DC branch of the Democratic Socialists of America. She plans to start law school next fall.