Errol Morris is unapologetic about putting the white supremacist figurehead on the big screen. 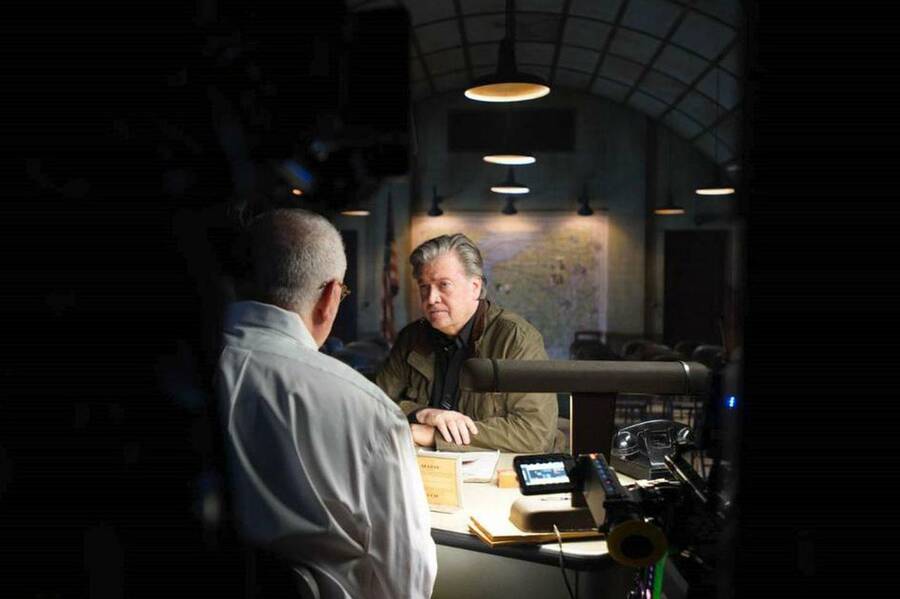 American Dharma, the latest film from veteran documentarian Errol Morris, premiered in the United States last month, more than a year after its festival debut in Venice. Morris had difficulty securing a distributor for the film, presumably because of its radioactive subject matter: Steve Bannon, a chief architect of Donald Trump’s stunning victory in 2016 and a white supremacist.

Morris is no stranger to fixing his camera’s gaze on unsavory figures. Coupled with The Fog of War and The Unknown Known, American Dharma completes a trilogy of longform interviews with purveyors of state chaos. Whereas Robert McNamara and Donald Rumsfeld both led the imperialist apparatus of the US government as secretary of defense, the subject of American Dharma does battle as self-appointed general in the culture wars.

The film has elicited especially polarized reactions from critics and theatergoers. Writing for The A.V. Club, Mike D’Angelo lauds Morris’s deft use of stylistic cues—for instance, staging the interview in a Quonset hut (a reference to the World War II film Twelve O’Clock High, one of Bannon’s favorite movies)—to challenge the narrative that Bannon spins. Permitting a white supremacist the opportunity to spin a narrative at all, however, has led to pushback: the film has inspired protestors to call for a boycott. Morris’s response to his critics has fluctuated between contrition and taunt; he has told reporters that he struggled with the question of whether to hand Bannon a microphone, but has also mocked challengers as ignoramuses who responded to Trump’s election by whimpering, “I want my mommy.”

I wanted to talk with Morris to get him on the record about his intentions and his appraisal of Bannon. This conversation has been edited for length and clarity.

Matthew Miles Goodrich: What was appealing to you about Steve Bannon as a subject for a documentary?

Errol Morris: Would I use the word appealing? Probably not. What was so interesting about Bannon? He was at least partially responsible for the election of Donald Trump in 2016 and for at least part of a year was a major advisor in the Trump administration. Isn’t that enough?

MMG: I suppose so. What were you seeking when you chose to interview Steve Bannon? Was there something about him that you wanted to understand?

EM: I wanted to understand him and what was going on. And interviewing someone has always been a way in, a way to figure out what someone is thinking, what motivates them.

EM: These are kind of crude questions. I didn’t make the movie so I could give you a one-sentence answer. I mean, what do you think, having watched the movie?

MMG: I think he wants to watch the world burn.

EM: That’s definitely part of it. A kind of angry, destructive impulse. I came to feel that was the case, spending more and more time with him, because his so-called philosophy makes no sense. It’s a hodgepodge of historical cycles, walls, anti-immigration. To me, it’s a whole lot of bullshit.

MMG: But there is a positive program, and that scares me. The wall is there to create a white state with socialism, but only for white people, basically an apartheid state.

EM: He’s a hypocrite, he’s a fascist, he’s a racist, and he’s somehow able to convince himself that he’s some kind of Gregory Peck hero out of a World War II movie. He sees himself at war—a guy who never really got to fight in a war has finally got an opportunity to create a war for himself. And what is this war? A war against Hillary Clinton? There’s an almost sexual excitement that he has [about the idea] that he’s going to bring her down.

MMG: There was a vulnerable moment in the film when you admitted that you’re scared of Steve Bannon. That’s the overwhelming feeling I have towards him, as well.

EM: If you’re not scared, you’re not paying attention. The negative reaction to American Dharma seems to have worsened in the last year or so. It’s based on fear—the feeling of powerlessness, that we are helpless, that Donald Trump will be reelected, that nothing can be done.

MMG: What do you say to the people who are boycotting the film?

EM: People have been talking about deplatforming—whatever the hell that is—for over a year. Bannon is as strong and as powerful as ever. Ignoring him, pretending he isn’t there, isn’t going to do this country any good.

MMG: I think there are certainly defenses to be made of deplatforming. One is Milo Yiannopoulos, a right-wing provocateur who started being protested everywhere he went and now appears to be broke and doesn’t have much of an audience.

EM: He’s been replaced by other people with like minds. Did that achieve any real objective? I doubt it. I think there’s a right way and a wrong way to deal with this craziness. The wrong way is to ignore it or to think that by “deplatforming” someone you have fixed the problem. You’ve done nothing of the sort. You just try to imagine you can make it go away by not looking at it.

MMG: And what’s the right way?

EM: The right way is to confront it. Talk about it, try to help people understand what’s going on.

MMG: Is there a misunderstanding of what the film is trying to accomplish and how it’s been received?

EM: The film is for others—but it’s mostly for me. My attempt to understand better what’s going on in our country. By doing these one-person films, I’m trying to figure out who these people are, what makes them tick. This was true of McNamara, it was true of Rumsfeld, it’s true of Steve Bannon. The insane vindictiveness, sadism, the destructiveness. If people get confused, I don’t know what to say.

I think American Dharma is much more than an interview. Maybe people focus on the interview, but it’s some of the most amazing images that I’ve ever put on film. [The Quonset hut] is interesting. You’re putting Bannon in his own fantasy. So maybe it’s the most movie-like of all the movies I’ve done. It has visual metaphors, it has moving images, it has the set being burned down. Maybe my small attempt to compete with Tarkovsky.

It’s a movie. And I’m very proud of the movie. I think it was an important movie to make. If people want to get upset about it having been made, fine. I can live with that.

Matthew Miles Goodrich is a writer, tutor, and organizer. He currently serves as digital editor for the online literary magazine Guernica and deputy fundraising director for the Sunrise Movement.