Shabbat Terror in the West Bank

For religious Zionist settlers in the South Hebron Hills, attacks on Palestinians have become a Shabbat afternoon pastime. 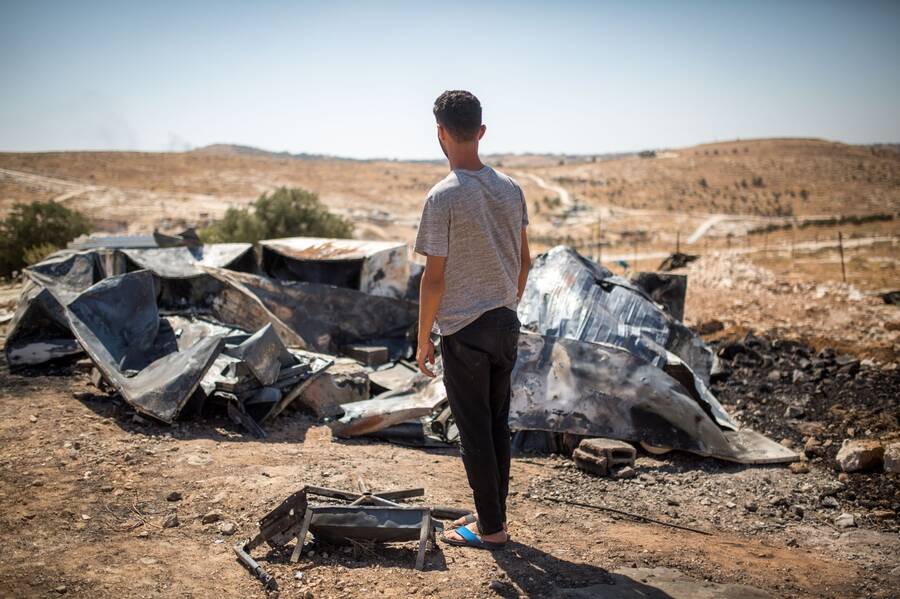 The ruins of a house in the Palestinian village of Mufagara in the West Bank, burned by religious Zionist settlers on Shabbat, June 27th, 2021. Photo: Emily Glick
Tweet Copy Link Email Print

WHEN I TURN MY PHONE BACK ON after Shabbat ends, I can measure the violence of the day by the number of unread messages that appear on my screen. Sitting in my home in Jerusalem, I scroll through dispatches from friends in the South Hebron Hills, a rural area in the southern West Bank, describing the day’s mob attack by Israeli settlers against Palestinians. If I have just a few dozen texts, then the encounter probably consisted of masked settlers throwing rocks at Palestinians or invading villages to physically assault residents. But if I find a few hundred messages waiting, I know settlers have likely set fire to Palestinian homes or even fired live rounds of ammunition at Palestinians or activists supporting them.

Amid a broad escalation of violence against Palestinians in the occupied territories, Shabbat has become the most violent day of the week in the South Hebron Hills. Unprovoked attacks on Palestinians have become something of a Shabbat afternoon pastime for the religious Zionist settlers in the region. Palestinians who live there even report seeing Israelis from elsewhere who have traveled to the area to spend the weekend beating up residents. Much like Sunday lynchings in the Jim Crow South—where white mobs murdered Black people on the Christian Sabbath, when they had time to participate in violence at their leisure—Saturdays have become an excuse for violence in the South Hebron Hills, transforming the Jewish day of rest into a social soiree of brutality.

These attacks, horrific in themselves, also violate the laws of Shabbat which the settlers claim to uphold. When settlers uproot Palestinian trees, they flout the prohibition against “reaping” on Shabbat. And when they deploy live ammunition against Palestinians, as well as Israeli and international activists, they contravene not only the biblical prohibition on lighting fires, but also a directive in the Mishnah—a rabbinic legal code compiled in the third century—which explicitly forbids carrying weapons on Shabbat. The text makes the logic of the prohibition clear: When one sage, Rabbi Eliezer, argues that bearing arms is permitted because weapons are “ornaments,” the other rabbis immediately retort, “They are nothing other than reprehensible,” and proceed to quote the famous verse from Isaiah describing the end of days: “And they shall beat their swords into plowshares and their spears into pruning hooks; nation will not raise sword against nation, neither will they learn war anymore.” Since Shabbat is, in the Talmudic imagination, a taste of the world to come, and the prophecy in Isaiah makes clear that this will be a world without weapons, the rabbis are firm in their position that arms have no place in Shabbat observance.

Keeping Shabbat is core to the Torah’s vision of the world—in fact, according to biblical law, violating Shabbat is punishable by death. While later rabbinic authorities functionally abrogated the death penalty, Shabbat observance is still treated with the utmost seriousness. And though Jewish law certainly permits actions that would otherwise be forbidden on Shabbat in the case of saving one’s own or another’s life, how, even in the most twisted version of reality, could unprovoked attacks against old people and small children be understood this way? Of course, the Jewish tradition is polyphonic—while its ultimate thrust is toward mutual accountability and love for others, Jewish texts feature calls to violence alongside those to radical justice and compassion—but on the question of Shabbat, the tradition is unequivocal. The fact that settlers are so willing to shed Jewish observance in order to commit violence against Palestinians is a damning condemnation of religious Zionism, in which the single-minded quest for control of the land has eclipsed the observance of mitzvot, and violent ethnosupremacy has taken precedence over all other aspects of Jewish life.

Settler violence across the West Bank, often with the cooperation of the army, is not new, but its increasing bravado aligns with a discursive shift toward emboldened ethnosupremacy in Israel. This spring, hundreds of far-right Jews marched through the streets of the center of Jerusalem, chanting “death to Arabs” and attacking left-wing counter-protesters and Palestinians; just weeks prior, Bezalel Smotrich, a member of Knesset and head of the Religious Zionist Party, said that Arabs who do not recognize that “the Land of Israel belongs to the Jewish People . . . will not remain here.” Smotrich is no ideological lone wolf in the Knesset: Amichai Chikli of the right-wing Yamina Party has derided the Israeli army for bringing back Palestinians alive following counter-terrorism missions. Itamar Ben Gvir of the extremist Otzma Yehudit Party has a picture of Baruch Goldstein, the Israeli settler who murdered 29 Palestinians while they were praying in 1994, hanging in his home; he has also pledged to “continue the path” of the “holy Rabbi Kahane,” meaning Meir Kahane, the far-right racist leader who supported the expulsion of Arabs from Israel. Even the recently elected prime minister, Naftali Bennett, has boasted about killing Arabs. In many ways, the halls of the Knesset, the streets of Jerusalem, and the fields of the South Hebron Hills have become twisted reflections of one another.

For Kahane, violence against Arabs was an essential, not incidental, element of Zionism, and the religious Zionist movement increasingly adheres to this belief. The Oslo Accords in the early 1990s and Israel’s disengagement from Gaza in 2005 both radicalized the mainstream religious Zionist world, which saw in these events the threat of territorial compromise. In the years that followed, settlers, buoyed by the state, began to take action to prevent Palestinian sovereignty at any cost. Rather than waiting for the state to approve its building projects, the settlement movement now builds its outposts without asking, sure that decisive action will secure retroactive permission. Mob violence functions as a core component of the settlers’ strategy, advancing their ultimate goal of territorial expansion and control. Not all religious Zionists would condone this behavior—yet the movement has created institutions and valorized teachers who promote a racist, ultranationalist vision for the future of the land, while its rabbis have been notably silent in condemning these attacks.

Perhaps our only answer to such cruelty is to return to the enduring source of Jewish countercultural tradition: the laws and ethics of the Torah, which the settlers, despite their nominal observance, have so hastily discarded. Violent fascism may be the norm in Israel today, and elaborate rhetorical webs may be spun to convince us that ethnosupremacy is rooted in a religious creed. But when we consult the sources themselves, the fallaciousness of this move becomes clear. In Jewish sources, Shabbat is referred to as chemdat ha’yamim, “the most delightful of days”—delightful precisely because, through the emphasis it places on obligation and community, Shabbat provides an alternate logic to the pervasiveness of exploitation, shunning the iniquity of this world and offering a vision of a redeemed world that could still come, if we work to bring it forth.

That work was on my mind a few months ago, as I stood with friends inside a Palestinian family’s home in the village of Sarura, which settlers had set ablaze the previous Shabbat. Community members and activists had struggled to put out the flames while their belongings—furniture, a generator, water tanks, and the crops in the surrounding fields—went up in smoke; Israeli soldiers watched idly from nearby. As I joined efforts to repair the home, scrubbing the charred walls and carrying burnt debris outside, I wondered what the so-called religious settlers were thinking as they struck the matches that ignited this inferno, violating the Torah’s most detailed commandment pertaining to Shabbat: “You shall kindle no fire throughout your settlements on the sabbath day” (Exodus 35:3). I thought about the prophet Jeremiah, who warns the Jewish people that the punishment for not observing Shabbat will be destruction by unabated fire. But here, both the disregard for Shabbat observance and the resulting fiery destruction are in the hands of the settlers. I wonder: Will these ruins be our only inheritance?

Maya Rosen is a graduate student studying history at the Hebrew University. She lives in Jerusalem and is active in anti-occupation work.

Conversation
Reclaiming a Minor Literature
The editor of diasporic Hebrew journal Mikan Ve’eylakh seeks to recover the possibilities of Hebrew language not tied to the State of Israel.
Maya Rosen
Photo Essay
Portraits of Resistance in Masafer Yatta
Israel’s Supreme Court will soon decide the case of the residents of Masafer Yatta, who have lived for decades under the threat of displacement by the military.
Emily Glick
Sign up for our email newsletter, featuring exclusive original content
Short on time?
Sign up for our weekly Monday roundup of everything you missed in Jewish Currents last week.