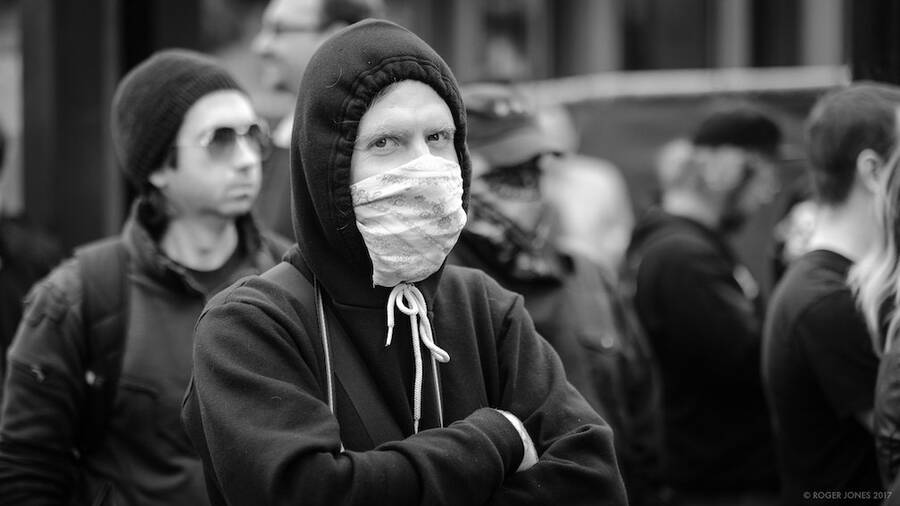 Discussed in this essay: Being Numerous: Essays on Non-Fascist Life, by Natasha Lennard. Verso, 2019. 144 pages.

NATASHA LENNARD’S Being Numerous: Essays on Non-Fascist Life is an urgently written collection of essays—some personal, some journalistic, and some combining both approaches—that explore what it means to live a non-fascist life, and whether such a life is possible at all. Fascism is not, Lennard reminds us, a mass politic that materializes suddenly, ushered in by a calculating and charismatic strongman (or, as one might imagine today, by an equally dangerous cruel and blundering one). Rather, fascism is a material coalescence of ideas and ideologies that order and dictate behavior to maintain a dominant, dominating social order. As Lennard lays out in eleven investigations into love and marriage, desire, suicide, the forms and function of protest, and the visual landscape of atrocity, everything presents fascistic potential.

This is not to say that Lennard isn’t interested in the rise of Trump. But to her, he is no historical anomaly. The book’s introduction begins with the evening of the 2016 presidential election, the result of which jarred many from their ahistorical belief in linear progress, exemplified by the beautiful black family then about to exit the White House. In the essays that follow, Lennard goes on to describe how liberals’ befuddled braying that “this isn’t our America” shows that they have missed the reality that “the current growth of fascism” is not “a diversion antithetical to liberal capitalism.” On the contrary, the framework of liberalism is inherently susceptible and complementary to fascism’s rise.

After the election itself came the Inauguration Day J20 protests. Lennard narrates her own account in the book’s first essay, “We, Anti-Fascists.” Later, in “Making Felons,” she describes the mass arrest of these protesters as a watershed moment for the state’s prosecution of antifascist protest. The rare “felony riot” criminal charge was applied to 214 defendants, all for what amounted to mere property damage—an unprecedented criminalization of dissent. In both essays, Lennard discusses the viral video of white supremacist Richard Spencer getting decked in the head by a masked antifascist during the J20 protests. This video became the meme that launched a thousand editorials, when many of us learned that—despite the United States’ prideful claim to have single-handedly defeated Hitler with the ideological and military might of American democracy—there is no consensus on the propriety of Nazi-punching. Some commentators argued that violence undermines the legitimacy of antifascist protest, while others observed that forceful action is the only thing that can defeat the far right (and the only thing that has ever done so). Lennard stands with the latter. “I had thought we could all agree: a prominent neo-Nazi was punched in the face; it was a good thing,” she writes. “I had miscalculated ‘we.’”

But the limits of Lennard’s approach become clear when she turns to liberal rhetorics around Black organizing. “Riots for Black Life,” an essay on Black Lives Matter and the 2011 London riots following the police murder of Mark Duggan, usefully delves into white people’s common bifurcation of Black political organization into nonviolent civil disobedience (good) and rioting (bad). Lennard describes how the former is celebrated because it can be rhetorically reduced to toothlessness—exemplified by the white co-opting of Dr. Martin Luther King, Jr.’s activist legacy—while the latter is positioned as unhelpful to the Black cause: “Liberals,” Lennard writes, “believing themselves on the right side of the anti-racist struggle . . . stress the presence of good, nonviolent demonstrators . . . who [march] and [mourn] but [don’t] riot or loot.” Yet this essay ultimately falls short of its potential. Reading it alongside “Still Fighting at Standing Rock,” which examines indigenous protests against the Dakota Access Pipeline, I was struck by how the two felt like merely perfunctory treatments of nonwhite liberation, the kind that white leftists understand are necessary to include to deflect criticisms of racism and insularity, but which persistently fail to substantially acknowledge—let alone foreground—nonwhite com­munities’ long-articulated narrations of our ideas and experiences. Aside from the fairly superficial use of one quote from Frantz Fanon and another from Angela Davis, “Riots for Black Life” fails to engage with the Black radical tradition. Black theorization of our own political expression is a synthesis of our lived experiences and interpretations of our material conditions. Glibly quoting thinkers from these traditions without deeply reckoning with them is a tokenization of nonwhite resistance. This gives rise to a harmful white custodianship and narrative gatekeeping of nonwhite struggle, as nonwhite political life is primarily interpreted and conveyed in accordance with white political sensibilities, “radical” and otherwise.

Lennard’s most thoughtful—and most flawed—use of a Black scholar’s work appears in the collection’s strongest essay, “Looking at Corpses.” Here, she addresses the overabundance of occasionally named and hashtagged, but more often identity-less, dead nonwhite people in our media landscape. She opens by quoting writer Ayesha Siddiqi, who in 2015 tweeted the question: “have you ever seen a white corpse in the news?” In Lennard’s engagement with the politics of disseminated images of atrocity, she deploys Cameroonian scholar Achille Mbembe’s concept of “necropolitics,” which names the state’s production of racial terror through varied forms of violence and social exclusion. Lennard writes, “Achille Mbembe stressed that necropolitics does not reside only in the exercise of sovereignty via the power to kill, but the power to organize others’ lives so that they are perpetually exposed to death.”

Yet, despite her apt use of Mbembe’s idea, Lennard promptly undermines its central critique. Mbembe coined “necropolitics” as a rebuttal to Michel Foucault’s “biopolitics,” which refers to the means by which the state manages and regulates bodies, communities, and entire populations. According to Mbembe, Foucault’s positioning of the Nazi concentration camp as the exemplar of the state’s production of violence failed to underscore the centrality of colonialism in state discipline. But pages after Lennard’s invocation of Mbembe, she summarizes Foucault’s description of the evolution of state punishment, from the publicness of the guillotine to the discipline that occurs behind the prison wall, unseen by the public—a genealogy that ignores colonial regimes and African chattel slavery, which Mbembe posits as the first applications of biopolitical experimentation. Lennard, despite citing Mbembe, has not absorbed his analysis into her own. This failure to meaningfully apply a Black scholar’s work in a citation of his work results in an analytical and epistemic failure: Lennard doesn’t appropriately centralize the primacy of enduring colonial violence in her description of the evolution of carcerality—and of fascism itself.

This has broader implications for Lennard’s project. After all, the disciplinary violence long deployed against racialized communities construed as threats to “public safety” informs bipartisan opposition to antifascists’ use of force, which ultimately seeks to undermine the state’s monopoly on violence. The anti-black language of “thug” is now weaponized against the nebulous “antifa” irrespective of members’ race. For instance, in August 2017, Berkeley Mayor Jesse Arreguin and other Democrats considered classifying antifascists as a gang after their defense of Martin Luther King Civic Center Park. And during the J20 prosecutions, defendants were originally charged using criminal conspiracy laws because they expressed shared ideologies (e.g., “fuck capitalism”), displayed particular political signs or tattoos, covered their faces, and moved as a single unit. This criminalization of group association and identity, regardless of participation in unlawful behavior, also underpins state prosecution of gangs as organized crime units, the targets of which are overwhelmingly nonwhite. Given this, it is not sufficient for a book about American fascism to include essays about Black Lives Matter and Standing Rock simply for inclusion’s sake. It must be explicitly stated that American fascism is an evolution of state carceral forms that were founded on the settler genocide of indigenous communities and the enslavement of black people.

Being Numerous is beautifully written, often incisive and astute, and eminently relevant. Yet its limitations struck me, as a Black leftist, as indicative of limitations of the white left more broadly, which are tied to persistent problems of de facto segregation. Under such conditions, a failure to adequately attend to Black thought—or to the often inherently state-undermining orientation of Black life—is to be expected. But as more and more literature from the white left reproduces this lack of consideration for nonwhite existence, it grows more and more difficult to explain to those willfully omitting our existence from their canon that our lives do matter (even as they repeat the slogan) and that, even without canonical recognition, our thought and social organizations are often the most subversive to the nation-states created on the basis of our subjugation.

Lennard’s book’s title, which is taken from the 1968 George Oppen collection of the same name, here evokes the numerousness of the black-clad antifa phalanx. A single individual can only offer so useful a defense or counterinsurgency, but the numerous masses can collectively hold their position—and  unsettle power—in meaningful ways, including those we have yet to see. Lennard thoughtfully interrogates what it means to challenge power and to truly personalize the political. By failing to fully assimilate nonwhite thinkers into the body of knowledge that we rely on to counter fascism, she forecloses the possibility that nonwhiteness might speak for itself or make a meaningful political offering toward non- or antifascist work. Ultimately, it is a confrontation with the reality of nonwhite life, thought, and struggle that will move us in the direction of leading more non-fascist lives.

Art
Under the Hood
A sanitized Philip Guston retrospective tries so hard not to offend that it skirts around the most interesting aspect of Guston’s work: his meditations on the American Jewish relationship to anti-Black violence.
Zoé Samudzi
Review
An Object Not Meant to Object
On The Wayland Rudd Collection
Zoé Samudzi
Sign up for our email newsletter, featuring exclusive original content
What’s good?
Signup for our weekly Shabbat Reading List for recs on what to read—and why.