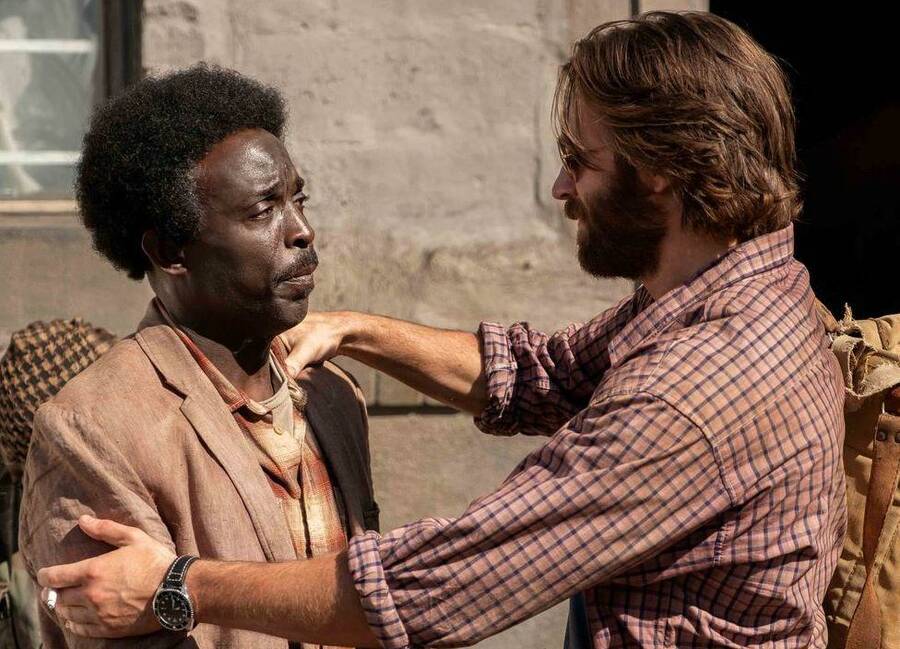 THE CASTING OF CHRIS EVANS—perhaps best-known for his portrayal of Captain America—as an Israeli hunk leading rescue missions of Jewish Ethiopians through Sudan to Israel seems like the stuff of satire, a parody of hypernationalist narratives. But it’s true: the patriotic Avenger basks in shirtless glory as a muscled Mossad agent in a recent Netflix catastrophe, The Red Sea Diving Resort, written and directed by Gideon Raff.

This thriller joins a spate of recent films glorifying Israeli Defense Force missions, a class that includes Munich (2005), The Debt (2010), 7 Days in Entebbe (2018), and Operation Finale (2018). The Red Sea Diving Resort tells the supposedly true story of Israeli agents heroically rescuing groups of Ethiopian Jews and bringing them to safety in Israel. Its representation of this history overlooks Ethiopians’ own role in it, reproducing an all-too-common white savior narrative. What makes this latest misrepresentation particularly galling is that its release this past July came just weeks after the killing of Solomon Tekah, an unarmed 18-year-old Ethiopian-Israeli, by Israeli police offers, a tragic and exemplary instance of the systemic racism Ethiopian-Israelis continue to endure.

The Red Sea Diving Resort opens with the sound of gunshots fired somewhere in rural Ethiopia in 1979. We meet Kabede Bimro (Michael Kenneth Williams)—a fictionalized version of Farede Yazazao Aklum, one of several Ethiopian activists involved in a deal between the Israeli government and the governing military Derg (“committee”), in which Israeli weaponry was exchanged for the passage of the first Ethiopian Jews out of the country, who later helped coordinate the escape of thousands of Ethiopian Jews to Israel. Kabede discusses logistics with a group of Ethiopians as they prepare to escape a tumultuous situation, the details of which are left entirely vague. Kabede’s simultaneous English narration heightens the drama but clarifies little: “My country is once again broken. Death is spreading. The new government is waging a war against the rebels. The rebels again have turned red with blood. Thousands dead. Millions disfigured, dishonored, displaced.”

This simplified story elides the complex historical context, erasing the complexity of Ethiopian politics of the time—and setting the stage for a narrative that treats Ethiopian Jews as hapless victims, rather than political agents. In the decades preceding the events of the film, revolution was brewing. As the rest of the African continent was decolonizing, and as student protest movements coalesced in major metropolitan centers around the world, discontent over land and wealth distribution was reaching a boiling point in Ethiopia as well. In 1974, the Ethiopian monarchy was brought down by leftist opposition groups, and the military Derg emerged as a provisional government. Quickly, two major opposition groups steeped in Marxist-Leninist ideology came into being: MEISON (All Ethiopian Socialist Movement), a group interested in working with the military regime in power, and the EPRP (the Ethiopian People’s Revolutionary Party), which contested the new military leadership. The Derg sought to forcefully quash its opposition, resulting in a long civil war.

Yet The Red Sea Diving Resort provides none of this historical context. Instead, screen time is devoted to action sequences—not of the Ethiopians fleeing war, but instead following the emotionally tortured white hero: Mossad agent Ari Levinson, played by Evans. Ari is introduced doing push-ups in the film’s second scene, as he waits for Kabede to drive a truck full of Ethiopians to the Sudanese border. From there, Ari escorts them to a refugee camp—but not before diving to rescue a young boy from rebel bullets. Ari leads a few dozen Ethiopians across a river into Sudan, where most of them will live for indeterminate amounts of time in refugee camps—an important piece of history that the film omits. Both Ari and Kabede are captured by the Sudanese military. This turns out to be another opportunity for the audience to watch Evans exercise (this time, pull-ups in an underground holding cell) until Ari and Kabede are bailed out by a CIA officer stationed in Sudan.

When Ari returns to Israel, his supervisor (played by Ben Kingsley) informs him that he’s too reckless and must stay home, despite his desire to save more Ethiopian Jews. Yet within minutes, Ari has hatched a plot to buy an abandoned Italian hotel in Sudan and continue smuggling Ethiopians across the Red Sea to Israel, and the Israeli government has agreed. Thus begins the film’s ill-conceived portrayal of Operation Brothers, a multi-year mission that included opening a fake resort named “Arous on the Red Sea” (in the film, the eponymous “Red Sea Diving Resort”) in which Ethiopian Jewish refugees would travel on busses from Sudanese refugee camps through the night to the resort. From there they would board rescue boats and sail out into the Red Sea to be picked up by Israeli ferries.

At this point—a mere 15 minutes into the film—history has already been dramatically rewritten to obscure Aklum’s centrality to the real-life operation. The film actively elides his role by giving the idea for the plan to Ari. The reality is different—and far more interesting. When the news of the Derg’s deal with the Israeli government became public, the Derg retaliated by persecuting the activists involved in the operation. Aklum, fearing for his safety, walked 300 miles from northern Ethiopia to Khartoum, Sudan. He brought along the contact information of Mossad agents who helped him to airlift Ethiopians to Israel the year prior; when he made it to Khartoum, he reached out for assistance. Mossad agent Danny Limor (the basis for Ari) was sent to meet him, and it was then that Aklum—not Limor—suggested that he might be able to convince Ethiopian Jews to meet them in Sudan if Israel could help support an operation from there to Israel. Aklum got to work writing letters to Jewish villages in Ethiopia, and several thousands walked, without the aid of an Israeli guide, to join the thousands of Muslims and Christians in Sudanese refugee camps also fleeing civil war.

But you wouldn’t know any of this about Aklum from watching the film. And The Red Sea Diving Resort is similarly dismissive toward Ethiopian Jews in general. When seen at all, they seem to be politically oriented only toward arriving in Israel. The reality is that Ethiopian Jews’ political commitments were far more complex and varying. The violence of the late 1970s and early 1980s Ethiopia spurred many forms of active and comprehensive resistance. Ethiopian Jews participated widely; many, for instance, were members of the Marxist-Leninist EPRP. Interviews conducted by sociologist David Ratner between 2014 and 2015 reveal that several of these activists felt a strong sense of obligation to a greater Ethiopia beyond their Jewish community. But in the film, Zionist motivations exist in a vacuum; Ethiopian Jews—when they are given airtime to speak at all—only speak about dreams of arriving in Jerusalem. By the time a quarter of the film has elapsed, their presence has been reduced to background noise. Front and center, instead, are montages of shirtless Evans jogging and tanning on a beach, and the hijinx of Mossad agents posing as hotel staff.

Ultimately, the version of history The Red Sea Diving Resort offers is in line with a story Israel likes to tell about itself: that it generously and altruistically rescued Ethiopian Jews, whose inclusion as citizens exemplifies the state’s supposed multicultural ethos. It’s a rosy picture. But the current maltreatment of Ethiopian Jews tells a different story. Ethiopian immigrants have the highest poverty rate among Israeli Jews. Those who achieve degrees of upward mobility still often face housing discrimination or endure racist profiling and the threat of police violence.

While Raff maintains that the Ethiopian community played an active role in the film’s creation, the neglect of their experiences and perspectives does more than create an inaccurate portrayal of this history. It also helps to propagate the narrative that Israel has been nothing but beneficent toward Ethiopian Jews, giving cover to those who continue to turn a blind eye toward present injustice.

Hannah Borenstein is a PhD candidate in cultural anthropology at Duke University. Her research is about the intersections of sports, politics, gender, labor, Ethiopia, and global capital.