The Senate’s most prominent Israel critic will join the rest of the Democratic caucus in voting for aid for the anti-missile system. 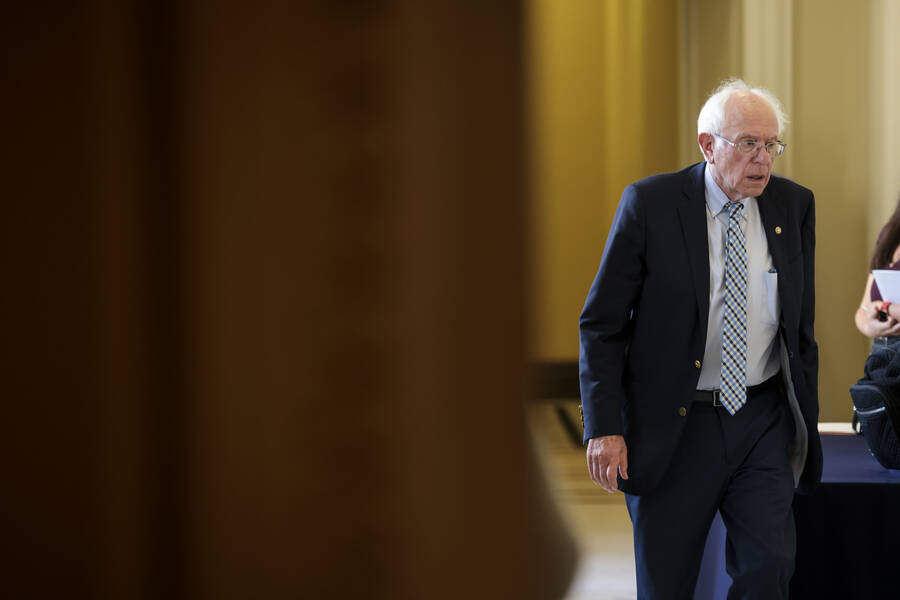 AHEAD OF A SENATE VOTE that is expected to authorize an extra billion dollars in military aid for Israel’s Iron Dome anti-missile system, Senator Bernie Sanders’s office says Sanders has secured a commitment from Democratic leadership that the US will also send additional humanitarian funds to Palestinians in Gaza, the coastal enclave devastated by Israel’s aerial assault this spring.

In a letter to Senate Majority Leader Chuck Schumer obtained by Jewish Currents, Sanders seemed critical of the Iron Dome funding, which would fulfill an Israeli request for targeted aid to the program on top of the $3.8 billion in US military aid that goes to Israel every year. While acknowledging that Iron Dome “saves civilian lives from missile attacks,” he also noted that the anti-rocket system was already “fully funded” by the US, and that the US gives Israel “more [aid] than any other country in the world.” But Sanders is also planning to vote “yes” on Iron Dome, leveraging his vote in exchange for leadership’s backing of the humanitarian relief.

“A goal here is to make clear that it’s no longer acceptable to keep sending billions in military aid to Israel without any debate, and without any acknowledgement of the violence endured by Palestinians living under occupation and blockade,” said Matt Duss, Sanders’s foreign policy advisor.

The move returns Sanders to a familiar role: that of the US Senate’s foremost advocate for increased aid for Gaza, to address the territory’s Israeli-imposed economic and humanitarian crisis. But it also serves as a reminder of the Palestinian rights movement’s weak foothold in the Senate. Palestinian rights advocates have spent the past few weeks pushing progressives to vote “no” on Iron Dome funding, arguing that additional military aid fuels Israel’s ability to carry out its policies of occupation and apartheid without facing accountability. Sanders, however, is not following their lead. In fact, it’s unlikely any Senator will vote “no” on the funding.

In his letter to Schumer, Sanders portrayed his request for $1 billion in assistance for Gaza as a necessary counterweight to the US’s overwhelming military support for Israel. “If the goal of this supplemental funding is to help Israel replenish Iron Dome after the war that took place in May, it would be irresponsible if we do not at the same time address the enormous destruction and suffering that that war caused the Palestinians in Gaza,” he wrote. “Just as we stand with the Israeli people’s right to live in peace and security, we must do so for the Palestinian people as well.”

Sanders’s move is the latest development in a tumultuous debate over funding for Iron Dome, which the House of Representatives approved on September 23rd in a 420 to 9 vote. The congressional debate pitted progressive legislators, who questioned why the US should provide another billion dollars for Iron Dome when the anti-missile system already received $73 million earlier this year, against Democratic Party leadership, who argued that the funding is critical to Israel’s security. The heated debate, which followed a string of progressive efforts to block US bomb sales to Israel earlier this year, was another sign that military aid to Israel will no longer sail through the House without controversy, even in the case of an anti-missile system that leaders of both parties portray as purely “defensive.” At the same time, the vote demonstrated that a wide majority in Congress continues to support military aid for Israel with no conditions on its use. “To have even nine no votes—eight from progressive democrats—is a step forward, but obviously, it was very disappointing how lopsided it was,” said Sandra Tamari, the executive director of Palestinian rights group Adalah Justice Project.

The House bill on Iron Dome funding is slated for a vote soon, though it’s unclear exactly when it will go to the Senate floor. Democratic leadership initially planned to fast-track the bill via “unanimous consent”—which limits debate and expedites a vote. But that plan was foiled Monday evening by Republican Senator Rand Paul, who proposed an amendment that would fund Iron Dome by redirecting aid earmarked for reconstruction efforts in Afghanistan. Asked by news outlet Jewish Insider about plans for the Iron Dome vote on Tuesday, Schumer said, “talk to Rand Paul and Mitch McConnell. We have complete support on our side to [pass by unanimous consent].” Despite this brief setback, the bill, once it comes up for a vote, is expected to pass easily and then be sent to the White House for President Biden’s signature.

Sanders’s expected “yes” vote will disappoint some Palestinian rights activists, who argue that Sanders should instead vote “no” and call for the US to stop funding Israel’s military, or at the very least demand conditions on aid to Israel that would prevent US dollars from being used to commit human rights abuses against Palestinians. The exchange of Iron Dome funding for urgent humanitarian aid “is not an acceptable trade to make,” said Sana Siddiq, the manager of policy and advocacy campaigns for the US Campaign for Palestinian Rights. “We need to move towards ending weapon sales rather than sending them through without a debate. Palestinians have asked Senator Sanders to divest from harm, and that means not sending further military funding to Israel.”

Advocates also argue that funding of the type Sanders has secured is insufficient to address the root causes of Gaza’s devastation. “Aid alone cannot help the people on the ground,” said Jehad Abusalim, a Palestinian from Gaza who is Education and Policy Associate of the Palestine Activism Program at the American Friends Service Committee. “Palestinians have been receiving aid for decades. What Palestinians need is to address the structural oppression and injustice that they experience because of decades of occupation and oppression by the state of Israel.”

At the same time, the aid is urgently needed: During the May assault, Israel dropped US-made bombs on homes, health care institutions, and schools, leading to a widespread humanitarian crisis for the 2 million people trapped in the territory. The Biden administration has sent $75 million in aid to Palestinians so far this year, and pledged $150 million to fund UNRWA, the UN agency for Palestinian refugees. According to Sanders’s office, Schumer committed to sending additional relief to Gaza. Schumer said in a statement to Jewish Currents that he looked forward “to working with Senator Sanders, other colleagues, and the administration to get needed humanitarian assistance, consistent with existing statutory requirements, to the Palestinian people.” Though Sanders’s letter proposes that the US send the same amount—$1 billion—for Israel’s anti-missile system and Gaza’s rebuilding efforts, it’s unclear what the total increase in aid to Gaza will be.