An interview with the former child star about her Jewish upbringing and being a lefty millennial Jew in Hollywood. 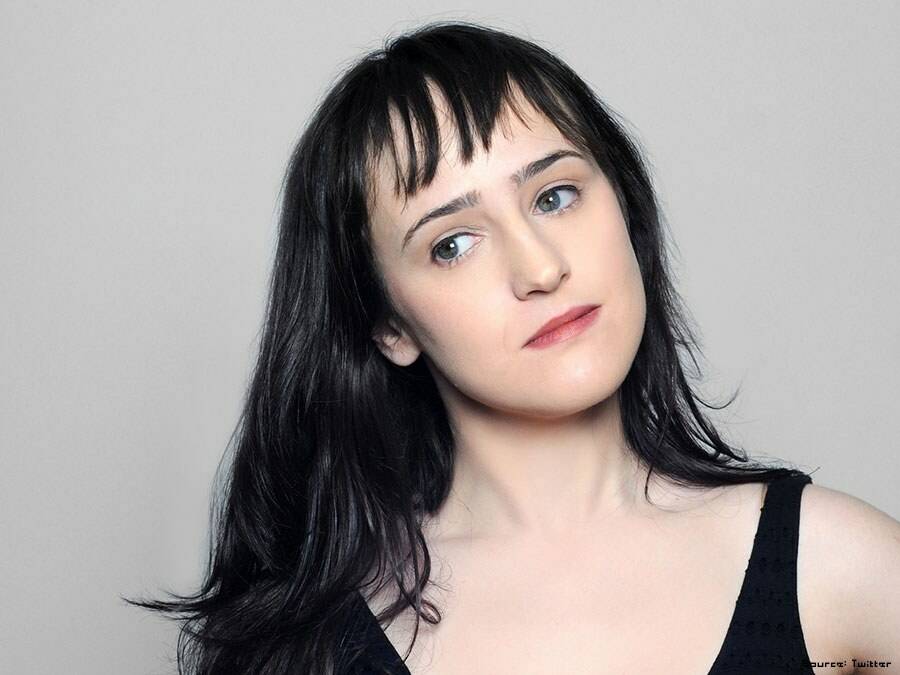 You’re probably familiar with Mara Wilson as the star of Matilda (1996), the Danny DeVito-directed adaptation of Roald Dahl’s classic children’s novel, or as Robin Williams’s younger daughter in Mrs. Doubtfire (1993). You may also know her from Twitter—where Wilson, now 33, shares her wry observations on politics and entertainment with more than half a million followers—or from her new memoir, Where Am I Now? True Stories of Girlhood and Accidental Fame. But I wanted to talk to Wilson for another reason: She’s a lefty millennial Jew, and I figured she’d offer a unique but relatable perspective for Jewish Currents readers.

The following conversation has been lightly edited. It originally appeared in yesterday’s email newsletter, to which you can subscribe here.

David Klion: Can you describe your Jewish upbringing in Southern California? How did your relationship to Judaism and Jewish identity change as you grew up?

Mara Wilson: I did not have the stereotypical white Ashkenazi L.A. experience. We weren’t wealthy, and I didn’t go to huge blow-out bar mitzvahs, or to Jewish summer camp. My family was lower middle class, and my father was raised Catholic. We lived in Burbank, which had maybe two synagogues, and I grew up having classmates ask me, “Are you Hebrew?”

I would describe us as Conservadox Jewish. We mostly kept kosher, mostly kept Shabbos, my older brothers were bar mitzvahed, and we went to an Orthodox shul two towns over. I remember when I learned the word “Reform,” I figured that’s what my immediate family was, because we were not as observant as many of the other people at our shul. Probably the funniest example of that is that we would always drive halfway to shul, then get out and walk the rest of the way so it looked like we hadn’t broken Shabbos by driving. But when I met actual Reform Jews, I realized that we were definitely at least Conservative.

Judaism was very important to my mother, and I learned so much about it from her. But in the years after she died, I felt myself slipping away. I think it’s partly the community I grew up in, which was very rigid and could be bigoted and cruel, very different than what I’d experienced with my mother. There were some horrible moments: I remember a girl telling me that I needed to apologize to her immediately after a fight because otherwise, Hashem would punish me, and there had “already been a major tragedy” in my family. I think that was part of the reason I never had a bat mitzvah.

In my late teens I became an atheist, which felt like a huge deal to me, but really wasn’t that big of a deal at all to my Jewish friends. Most of the Jews I knew in New York were atheists! But I think I came to realize that even most of the writers on science, philosophy, and atheism I was reading and loving were Jewish—Sagan, Spinoza, Emma Goldman, and so on. I still am, at the very least, agnostic, but learning more about Judaism and Jewish history and observing the holidays has become very important to me. I do wish I’d had a bat mitzvah, but fortunately, adults can have them, too! Maybe I’ll have one when it’s safer to gather in groups again.

DK: You’ve lived in both New York and Los Angeles. Most of the Jewish Currents staff, including me, is based in Brooklyn, and like a lot of our peers here we’re experiencing a growing interest in and identification with the old labor Jewish left. Have you seen anything similar on the West Coast? How does secular Jewish identity in our generation differ between those two cities, in your experience?

MW: I think there’s definitely a longer history of Jewish leftist activism in New York. I remember walking by the Workmen’s Circle building one day in my early 20s, and immediately knowing I wanted to learn more. I looked them up online, and was amazed that there had been a Jewish society in New York at the turn of the 20th century that believed so much of what I did! I started looking more into the Bund and Jewish leftism, then, although I think I was still a little nervous to do any major activism. I didn’t feel that sure of my beliefs yet. Instead, I just mostly tried to find friends who believed what I did.

The thing about Los Angeles is that it’s not one city, it’s lots of tiny cities. So I do think it’s hard for there to be any kind of united Jewish left community. I know there’s a Jewish Democratic Socialists of America caucus—I’ve hung out with them before. I also know there are a lot of very progressive synagogues, some of which I’ve been to. But in my experience, it’s not as united as the community in New York. I would LOVE to be proven wrong, though!

DK: You’ve been outspokenly supportive of progressive causes and of Bernie Sanders. Your cousin, fellow SoCal Jewish celebrity Ben Shapiro, has polar opposite politics, and you’ve made it clear in past public comments that you and he don’t have a relationship as adults. How did you find yourself drawn to the left?

MW: The Jewish community I grew up in was VERY politically conservative. There were a lot of strong personalities and loud voices that seemed to drown out all others. Until I was a teenager, I pretty much believed that all Jews were that conservative. I remember being shocked when I met Jews who were voting for Gore over Bush—and these were Chabad Jews! The idea that you could be Orthodox and liberal or even leftist had never crossed my mind; I thought everyone had the same specific beliefs and interpretation of Judaism that I had grown up with. But I think working in film and theater allowed me to meet different kinds of Jewish people, as did moving to New York.

I think I was afraid to admit any lefty tendences for a long time. It was so at odds with my upbringing, and I had a people-pleasing streak, so I was afraid to be wrong! I wouldn’t even admit to being “liberal,” and insisted I was a “moderate” until my college boyfriend, an East Coast left-leaning Jew, got me to admit otherwise. In the past few years, I’ve found myself moving more and more to the left, and the more I’ve read about the leftist history of Judaism, the more I’ve felt that this was where I belong.

It’s funny, because people always say I’m “political” now, but I never thought of myself that way. I always thought being “political” meant you were a cheerleader for particular political candidates and parties, and that you were convinced that what you believed was correct. I was never that sure of myself, and I thought it was dangerous to put anyone up on a pedestal, let alone politicians. I just think I have a lot of compassion for people, regardless of their political beliefs or where they’re from, and really just want justice and dignity and a future for the world. And I think Nazis should fuck off. I guess that makes me a leftist Jew.

DK: From past interviews and from your Twitter presence, it’s clear that you’re very well-adjusted and self-aware in a way that many former child stars often aren't seen by the wider public as being, fairly or not. What do you attribute that to in your background, upbringing, or values? Or do you think that’s even a fair perception, of you or of other former child stars?

MW: I take it as a compliment, but I do think it is a bit unfair to other child actors. I know the tremendous pressure they're under, and it could have just as easily have been me, if my circumstances were slightly different. People have told me that I “turned out alright,” but who ever really “turns out” anything? Yes, I’m an adult now, but I’m still learning and changing all the time. There’s not one point in your life where you are “turned out” and complete.

I do think that there are essential things child actors need in order to be happy with themselves, though. They need a family that loves them unconditionally, and they need to be able to get out as soon as it stops being fun. They need to have parents or guardians who know where they are and who they’re with at all times, and they need studio teachers who care about their education (I was very lucky there). They need friends who aren’t actors, and they need to be reminded that they’re just kids. They also need to know that fame does not last forever, that it waxes and wanes, and there need to be other things they want to do, that they can be passionate about. (I cover this a bit more in Showbiz Kids, the HBO documentary I did recently, directed by Alex Winter. I don’t think I would have done it if it hadn’t been made by a fellow former child actor.)

I do think that I was very fortunate, and my parents did do a lot to try to keep me safe and grounded. They never touched my money, for one: the understanding was that it was all for college and my adult life. They also prioritized my education, made me share a room with my sister, and treated my brothers’ track meets and sister’s art classes as just as important as my auditions and premieres. They took my career seriously, but made sure it was fun for me, and made sure I felt okay taking time off from it. They encouraged me to try to be creative in other ways and find other interests besides acting, and they always encouraged my writing. My siblings were also a great source of support, and still are.

DK: I know you’ve worked with Danny DeVito, one of the rare Hollywood celebrities who seems to be an outspoken leftist and a fan of both Bernie Sanders and Jeremy Corbyn. Do you and he ever talk politics? Have you influenced each other’s thinking?

MW: I do think he influenced me, though I don’t know if I noticed it at the time! Danny and Rhea Perlman were like a fun uncle and aunt to me growing up, and they were always very giving, compassionate people. Danny and I haven’t talked politics in 2020, though we did the last time I saw him, and we have a lot of beliefs in common. I was so happy to see he was a Bernie supporter, as well! I also think if you look at Matilda, it has a pretty progressive message. It’s about kids banding together to defeat a tyrant. It’s about “chosen family” and standing up to injustice and authoritarianism. It’s about using knowledge and learning, but also anger and passion, to do what’s right. It’s pretty bold!