A new report from Data for Progress shows that there’s room for the primary candidates to move left. 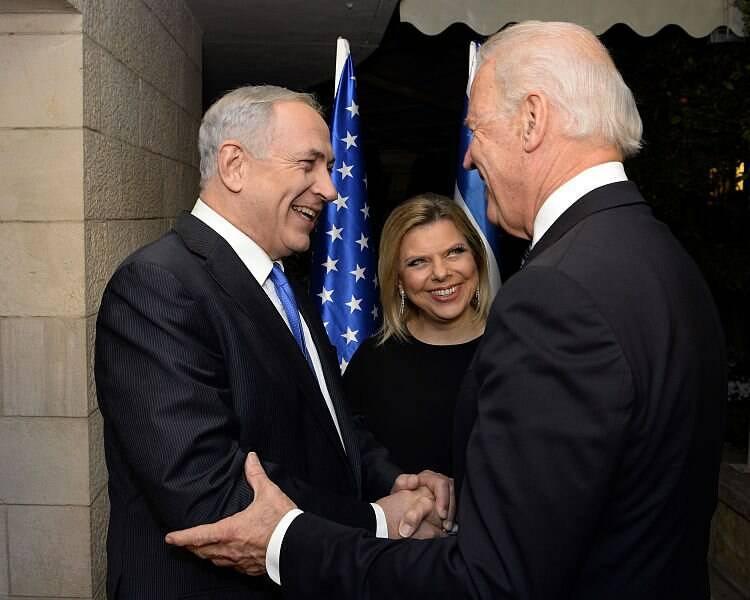 Currently, Israel receives $3.3 billion in military aid and $500 million in missile defense funds each year, an arrangement laid out in a 2016 memorandum of understanding signed by the Obama administration and the government of Israel. Progressives in the Democratic Party—including Reps. Ilhan Omar, Mark Pocan, and Alexandria Ocasio-Cortez—have raised the possibility of reducing US military aid in response to Israel’s policies toward Palestinians. This rift between progressives and Israel was only further exacerbated after Israeli Prime Minister Benjamin Netanyahu barred Omar and Rep. Rashida Tlaib from visiting Israel and the West Bank in August, prompting angry pushback from top Democrats.

The Data for Progress report accompanying the new poll, which I authored, includes detailed profiles of the records of the five leading contenders in the Democratic presidential primary field with regard to Israel. Of these five, only Bernie Sanders has endorsed the possibility of using US aid to Israel as leverage toward a negotiated solution with the Palestinians. After Netanyahu barred Tlaib and Omar from visiting Israel and the West Bank, Sanders went further, tweeting: “If Israel doesn’t want members of the United States Congress to visit their country, maybe they can respectfully decline the billions of dollars that we give to Israel.” Pete Buttigieg has said that if Netanyahu were to annex parts of the West Bank, “a President Buttigieg would take steps to ensure American taxpayers won’t help foot the bill.”

The other frontrunners have stayed well within the parameters of the dying bipartisan consensus on Israel. Joe Biden, whose involvement with the US–Israel relationship goes back more than 45 years, has said he would wield pressure on the Israeli government “in terms of what they can and cannot do relative to what is accepted internationally”; he has also campaigned on the 2016 aid deal as an Obama administration accomplishment. Elizabeth Warren has promised to pressure Netanyahu to end the occupation, but the only policy proposal she has advanced is a return to the Obama administration’s negotiations-focused approach. Kamala Harris doesn’t even go that far: she has campaigned this year on her opposition to the Obama administration’s mild rebuke of Israel over settlement construction at the United Nations in 2016.

YouGov Blue fielded an online poll for Data for Progress based on a national sample of 1,380 US voters from August 15th–21st. As a Data for Progress senior fellow (working independently from IfNotNow, the anti-occupation organization I co-founded), I drafted two questions for the poll on the topic of US foreign military aid—one that spoke to a global context, and one that focused on Israel specifically. The questions presented a strong case for both the pro and con arguments:

- Israel is one of the largest recipients of US military aid. Some legislators in the United States say that aid should be reduced because Israel often violates the human rights of Palestinians by using lethal military force against unarmed Palestinian civilians, including children. Other legislators in the United States say aid should not be reduced; Israel does what it needs to do to protect itself from terrorism and hostile foreign powers, who deliberately provoke Israel with violence. Do you [support or oppose] the US government reducing foreign and military aid to Israel based on human rights violations?

These questions were among a battery of other questions asked in a randomized order, so that some participants were asked the general military aid question before the question about Israel, while others answered the Israel question first.

A closer look at the data reveals some clear patterns. Republicans, and especially those who identify as “very conservative,” hold Israel to a different standard than they hold recipients of US military aid in general. Democrats, on the other hand, support reducing aid to Israel for human rights abuses at the same rate they support cutting aid to any government engaged in violations of human rights. Democratic voters responded to both questions with a high degree of consistency and majority net support.

Self-reported ideology—on the flawed, but still useful scale of “very liberal” to “very conservative”—is the trait most correlated with support or opposition to reducing military aid to Israel on the basis of human rights.

Self-identified “conservative” voters oppose human-rights based reduction in aid to Israel by a margin of 49%: 19% of conservative voters support the policy, while 68% oppose it (including 55% who strongly oppose). These voters support reducing aid to human rights abusers in general, 55% to 15%—again, a 40% margin in favor. Conservative voters made up 18% of the sample; 83% of them voted for Republicans in 2018, 88% of them are white, and 39% of them are born-again/evangelical Christians.

Reducing aid to Israel for human rights reasons has the net support of 18% of self-described “moderate” voters: 45% of moderate voters support it while 28% oppose the policy. (Moderates also had the highest percentage of “neither support nor oppose” and “not sure” responses on this question: 27% of moderates fell into one of these two categories.) Moderate voters support reducing aid to human rights abusers in general by a 50% margin: 61% in favor, 11% opposed. Moderate voters are 30% of the sample; in 2018, 54% of them report voting for a Democratic congressional candidate, while 31% voted for a Republican candidate. The racial makeup of moderate voters in the sample is 67% white, and 33% are people of color; 26% of them are born-again/evangelical Christians.

These results show that reducing US military aid to the government of Israel based on the Israeli government’s abuses of the human rights of Palestinians is a highly ideologically charged issue: liberal voters support it by large margins, while conservative voters oppose it by margins that are similarly large. The liberal and “very liberal” voters who support the policy by 50- and 60-plus-point margins are Democratic voters. Democratic politicians who raise the possibility of imposing material consequences on the state of Israel for its mistreatment of Palestinians are doing so with the support of their party’s voters.

Conversation
The Polish Government’s War on Jewish History
Dariusz Stola, former head of Poland’s Jewish museum, discusses the far-right national politics that ousted him from his position.
Emma Saltzberg
Report
Poll: Democrats Are Divided on BDS
A new Data for Progress survey shows no consensus for or against boycotting Israel, and many voters remain undecided.
Emma Saltzberg
Sign up for our email newsletter, featuring exclusive original content