On Being a Fetish

Is identity-based kink ever kosher? 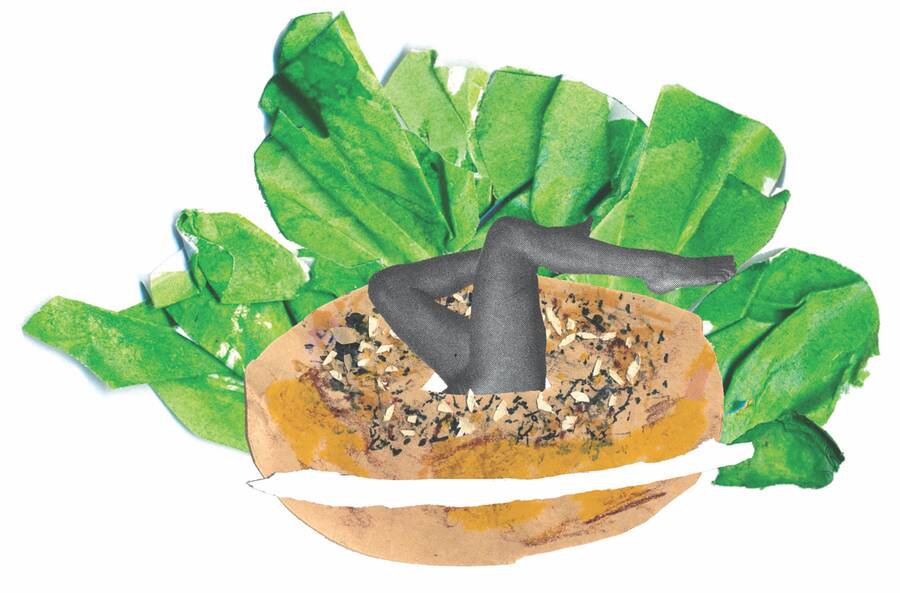 “WHAT WOULD your Jewish lawyer dad think if he knew what I was doing to you right now?” Ben asked as we sat tangled in the front seat of his suburban assault vehicle, negotiating the car’s center console. I was 19 and making the most of my trip home the summer after freshman year, which in the days before Tinder meant a Craigslist date.

“Uh, I don’t know,” I responded, “this kind of thing isn’t really his business, don’t you think?” A jolt of exasperation flashed between us. I had given the wrong answer.

He tried again. “But aren’t you his only daughter? And you’re getting fingered by a Christian boy you met on the internet.”

I sighed, pressing my knees closer together. “I, uh, don’t want to talk about my father right now.”

He nodded in muddled recognition, and we continued, silent. I knew what he had wanted me to say: My Abba doesn’t know that I’m out with you right now. He would never have given me permission.

For as long as I’ve been having sex, men have wanted to fuck my Judaism and have sought me out because of it. Their desire skates close to the idea of the Jewish American Princess, a postwar amalgamation of upward mobility and materialism, a spoiled and sheltered woman who believes she deserves the very best and offers little in return. As with most stereotypes, it is ultimately an expression of animus. It’s no fluke that both this hostility and its expression as desire fall along economic lines, which is why my father’s professional achievements get thrown into dirty talk. Where American Jewish men contend with stereotypes of being oversexed, needy, nebbishy and neurotic (like Woody Allen, boo hiss), Jewish women are cast as withholding, bossy, exotic, and materialistic (like Fran Drescher, which honestly? Goals). To fuck a woman like this is to wrest from her that which has been withheld—in effect, to win. Domination is about defeating a Jewish desire to deprive, while being dominated is about reinforcing the stereotype of overbearance.

Jewishness looks like a lot of different things but a fetish for Jewish women doesn’t, and I fit the type. As Gilda Radner would say, I’ve got that “Jewess look”: dark curly hair, light skin, big breasts, a big nose. I’m outspoken and smart. Crucially, I grew up religious, in an upper-middle-class family. The fetishization I have experienced relies on stereotype, uncomplicated by the realities of my life. Zoom in on the fact that I use my hands expressively when I speak, zoom out on the fact that I’m talking about prison abolition. Magnify what confirms me as a sexually liberated yet protected Jewess, maternal but also independent, assertive unless instructed otherwise. Minimize the inconvenient facts of my personhood.

FOR SEVEN YEARS, I worked at a sex-toy store, and during my time there I heard about more fetishes than I could count. Vore: people who get off on the fantasy of shrinking and being eaten by a giantess, or being a giant and eating someone else. Carstuck/pedal pumpers: people who get off on women getting their cars stuck in mud, left pumping the gas in vain. Pigeon transformation fetish: pretty much what it sounds like. Some fetishes are more common than others, and some involve more stigmatized elements than others, but to me, most fetishes are value neutral. I help a friend who is a foot fetish model when she needs a second pair of feet for a video shoot, and too much of our work is assuring nervous men that they aren’t aberrant and vile for liking feet, one of the most pedestrian (ha!) of niche predilections. Who cares? We don’t live very long so suck a toe or put on a pigeon suit and enjoy your life.

Sex offers an arena in which to experiment with roles that excite us, providing a release valve that can lessen the pressure of our roles in everyday life. In my years in organized kink communities, I watched people finally relax as ropes tightened around their bodies, laughing as they were lashed to a beam. It feels elementary to me: we live in a violent and disempowering world; making space to give and take power consensually is taking the lemons life gives us and making lemonade. It’s not surprising that we like things that are fucked up, maybe even because they are fucked up. That’s not a bad thing, it just is.

However, fetishes that arise from our social construction of identity feel more fraught to me than birds or giants or feet. The phrase “it’s just a preference” to describe sexual selection of a particular body type, race, or cultural identity is threadbare, and leaves the oppressive machinations of our society exposed. What preference exists outside of the power imbalances embedded in our culture? And fetishizing a marginalized group in particular, making that a central part of the sexual process with a person from that group—how could that be about anything other than replicating these unjust power dynamics?

No one who has wanted to fuck my Judaism has figured this out yet. No one has asked my consent. No one has yet understood that in their fetish they flatten me, bend my narrative to a stereotype to satisfy their will. In other words, no one who has tried out their Jewish fetish on me has adequately acknowledged its problem. These men have a preference for a me-but-not-me, a me whose story is collaged together from movies, TV, porn. These men come with a sweaty script in their hands; they see in me an actress who fits the description and nothing more.

Which is not to say I haven’t sometimes participated in the performance. For many years, it was impossible to imagine my body, a Jewish body, as sexy. My Jewishness belongs to me now, but it started in my house with my family. It lived in synagogue. I could not conceive of myself as an object of lust because I was too wrapped up in the chrysalis of my history and the horrors of puberty. Nor could I imagine having sex with a Jewish person, because the Jewish people I knew were my parents and my congregation and Randy fucking Rosenthal with the football-themed bar mitzvah. Judaism was important, but not sexy. Holy, but also boring, and all around me. To me, there was nothing less exotic than Jews. So when I met men for whom I held an alien kind of allure, I engaged in relief. There is something blunt desire offers that viewing me in the full complexity of my humanity doesn’t. It’s the difference between someone going to bed with you because you’re smart and kind, and someone going to bed with you because they are hungry for you. I’m not interested in fucking people whose attraction to me lives solely in their executive brain. I want the guts and the meat and sweat of it, and sometimes that is partnered with a kind of objectification.

But allowing myself to be seen in this way is also a tactic—a woman’s way of borrowing power. I have absorbed the lie that there is nothing more important to my existence than being sexy to someone else. My feminine socialization has taught me to view my own sexual encounters in playback, as a director watching myself on a monitor, knowing how to stage the action for maximum impact. To successfully wield an exotified and othered body during sex, to shapeshift into exactly what someone else wants, to reduce a vital man to a postcoital ghost—this, too, is a complicated kind of power. I, too, am making lemonade.

LIKE ATTRACTION that digs into identity, kink can hurt like a deep tissue massage, or can harm like a chemical burn, and thoughtful perverts know the difference. We are better at talking about that difference when the kink is related to physical hurt or harm, like the difference between being spanked red-bottomed versus sustaining nerve damage. We are less able to tease out this distinction when our kinks are based in social identity, which is the difference between playing out an edgy scenario responsibly and replicating oppression.

Of course, there are those who live fully in a culture where dominant modes of oppression go entirely unchallenged. But for the rest of us, there is at least a vague awareness that voicing a sexual preference for a specific race or cultural background is often seen as distasteful. (Not to mention ineffective: disclosing a Jewish preference to me outright would likely foreclose on someone’s ability to get in my pants.) I think the resulting shame is partially what prevents us from approaching this topic with the same forthrightness as we might our other desires. The shame of wanting something fucked up often results in avoidance, in the abdication of responsibility. Keeping quiet about a base desire does not erase the desire itself. So people learn to pursue what they want without speaking about it, maybe without thinking about it—they learn to take it without asking. This is how horny questions about my dad’s job get dumped in my lap, undigested and unconsidered.

Identity-based power exchange, like all forms of kink and fetish, only functions well with careful negotiation and introspection. So, for the Jew fetishists of the world, might I suggest a deep dive on the therapist’s couch to figure out what’s behind the attraction, and a meticulous consent process before casting your very own Jewess in the fantasy play? If the guy in the pigeon suit can do it, so can you.