No Reason for Optimism

Right-wing parties will be ascendant in Israel for years to come. 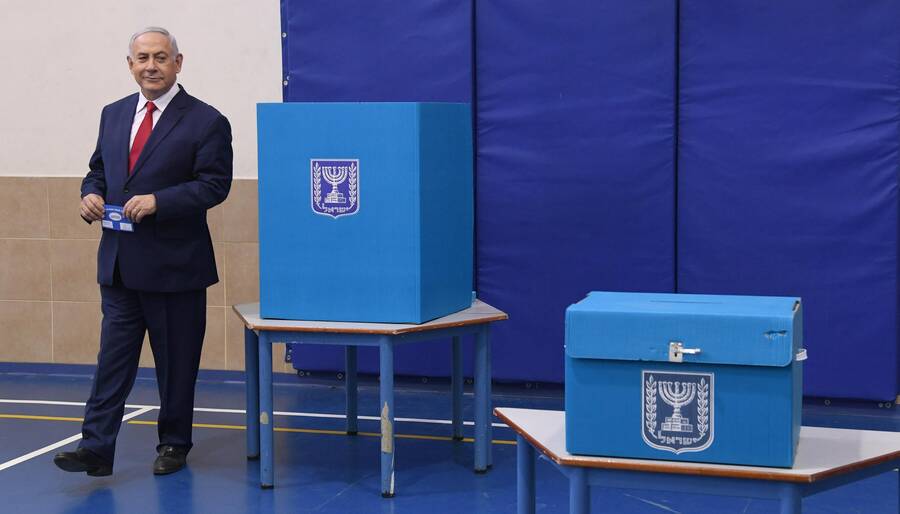 WITHOUT EVEN examining the exact vote tallies, it would be safe to call Israel’s Knesset elections on Tuesday a disaster. Initially depressed Arab voter turnout, a failed opposition campaign devoid of any meaningful policy promises, and typical right-wing Election Day shenanigans all point to the continuation of an unacceptable status quo. Nobody with any power is interested in challenging the occupation, and the Israeli electorate appears to be more right-wing than ever. Likud’s Benjamin Netanyahu, who as of now looks set for a record fifth term as prime minister, faces multiple imminent indictments for corruption and fraud. Although it is unlikely he’ll be able to hang on for long, Netanyahu will probably be forced to placate his right flank by initiating the formal annexation of Palestinian lands to Israel, as he promised in the final days of the campaign. Any of his potential replacements will at the very least continue this policy and possibly expand it.

Although some insist that the elections are themselves proof of Israel’s fundamentally democratic nature (in spite of the millions of Palestinians under occupation who were not able to cast a vote for the government that exercises total authority over their lives), from the moment polls opened on Tuesday morning, the sickness of Israel’s political situation was on full display. Likud Party activists were caught using more than 1,000 body cameras to surveil polling stations used by Arab citizens of Israel, a transparent attempt both to intimidate Arab voters and to use fear to motivate right-wing voters. Likud quickly copped to the scheme, and the matter has already been referred to police by Israel’s elections board. The head of the PR firm that organized the hidden cameras, however, bragged about the intimidation tactic, writing on Facebook that “we managed to lower the voter turnout to under 50 percent, the lowest in recent years!”

This kind of dirty trick is nothing new. During the last set of elections, in 2015, Netanyahu infamously released a video in which he claimed that Arab voters were “heading to the polling stations in droves.” The Israeli electorate of the last decade, as Netanyahu knows better than anyone, is often moved by such displays of strategic racism.

“This election demonstrates that the vast majority of the Israeli electorate is wholeheartedly supportive of the policies of apartheid or indifferent to them,” Yousef Munayyer, executive director of the US Campaign for Palestinian Rights, told Jewish Currents on Tuesday before the results were finalized. “I think regardless of who wins, that is not going to change.”

The actual results of the election confirm this intuition. With 35 Knesset seats out of 120 total, Likud tied with center-right party Kachhol v’Lavan (Blue and White), headed by Netanyahu’s lead challenger, former general Benny Gantz. But this “tie” is illusory: Netanyahu has a clearer path to assembling a coalition of at least 26 other Knesset members, which was apparent months before the election. The coalition that Netanyahu will form to lead his next government will be composed of a variety of small right-wing parties. These parties, in return for entering the next ruling coalition, will exact significant concessions from a weakened Netanyahu-led government, pushing its already ultra-nationalist agenda even further in that direction.

Netanyahu’s position is less secure for reasons beyond the indictments. Over the last decade, the prime minister has prevented anyone else on the right from acquiring enough power to become a legitimate threat. This has pushed rising stars of the Israeli right into smaller parties that have a harder time meeting the minimum 3.25% vote threshold required to enter the Knesset. It is only because Netanyahu splintered Israel’s right-wing electorate (which comprises the majority of the country’s 6.3 million voters) so thoroughly that it appeared for a time that Gantz might have a chance at forming the next government.

The casualties of this election were Naftali Bennett, Ayelet Shaked, and Moshe Feiglin—bonafide celebrities of the Israeli right (and hardcore pro-Israel activists in America) whose absence from the next Knesset represents the thinnest of silver linings. Though Shaked and Bennett are demanding a recount because of the narrow loss of their party, Hayamin Hehadash, as of this writing it remains uncertain whether they will gain enough votes to pass the minimum threshold.

The right-wing parties that instead made the cut, notably the Russian immigrant-supported Yisrael Beitenu and United Right—itself a coalition of smaller right-wing parties that includes adherents of the late, far-right militant Rabbi Meir Kahane—are in an even stronger position now because Netanyahu needs them that much more. Indeed, Netanyahu foresaw such a possibility himself back in February, when he promised United Right some plum cabinet positions, like the education and housing ministries, in exchange for teaming up with the Kahanists to maximize their Knesset placement. And “by throwing also annexation into the mix,” Haaretz journalist Anshel Pfeffer noted, Netanyahu “perhaps unintentionally just wrote them a massive check that they will now work hard to collect upon.”

As for what this election means for the occupation of the West Bank or the blockade of Gaza, there is no possibility of good news. Though there remains a debate over what exactly Netanyahu meant last week when he said he would begin “annexation” of the West Bank in his next term, the status quo hints at what the contours of such a policy might look like.

“Those who are concerned by Netanyahu’s recent comments about annexation should start paying attention to reality,” says Simone Zimmerman, director of B’Tselem USA, the American branch of the Israeli human rights group, adding, “this process to make the occupation permanent has been underway for years with zero consequences.” Netanyahu and his settler allies continue to build new Jewish communities on Palestinian lands in an attempt to establish facts on the ground, while simultaneously writing laws “to expand and entrench the dual legal system that already exists in the West Bank,” as the Israeli lawyer Michael Sfard has written.

Compounding the situation is the US government’s acquiescence and encouragement of such a policy, marked by the Trump administration’s recognition of the Golan Heights as Israeli territory and Jared Kushner’s long-awaited “Deal of the Century,” which will likely pave the way for further territorial annexations in the West Bank. With all these facts in hand, it’s easy to see Netanyahu pursuing a kind of piecemeal annexation until his coalition partners, many of whom support a policy of expelling Palestinians from the West Bank, are able to force him to claim all Palestinian lands are officially territory of the State of Israel.

Unlike in the United States, where Donald Trump is deeply unpopular with younger generations, support for Netanyahu and the right-wing attitudes he represents are common among Israel’s youngest voters. As one 20-year-old settler told a reporter for Jewish Currents on Tuesday, “I wake up in the morning, I go to the army, I love my life, I love to smile, just because Bibi. He keeps my family safe.” Fed a steady diet of xenophobia and nationalist messaging about the perpetual Palestinian and Iranian threats to Israeli security and sovereignty, there is little reason to hope for change from within Israel for the foreseeable future.

The only force capable of stopping the Israeli right, then, is the US government, which disburses several billion dollars of military aid to Israel every year, without which Israel’s military rule over Palestinians would be impossible. Though the Democratic Party is in a strong position to retake the White House in 2020, it is deeply divided about what its policy toward Israel should look like. But its base, especially the younger progressives who are pulling the party’s agenda leftward, increasingly demands something different from the status quo. American centrists and left-wingers alike are now comfortable calling Netanyahu a racist who shouldn’t be in power. Whether this attitude translates into a meaningful policy change, in spite of the firmly pro-Israel Democratic leadership, remains an open question.