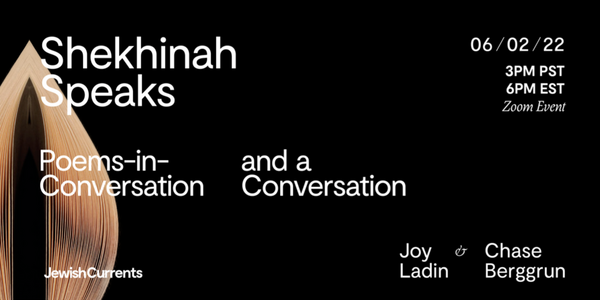 In the mystical Jewish tradition, the Shehkinah refers to the imminent, feminine aspect of the divine. Dwelling with human beings but not bound by human logics of time and space, the Shehkinah is at once intimate and elusive—and often, in traditional representations, silent. Now the poet and scholar Joy Ladin has given voice to this presence in her new collection, Shekhinah Speaks. Comprised of 22 poems, one for each letter of the Hebrew alphabet, Ladin’s text borrows from a disparate pair of sources—the Book of Isaiah and Cosmopolitan magazine—to turn over questions of personal and spiritual significance. In celebration of the publication of Shekhinah Speaks, Ladin will be joined by the poet Chase Berggun for a reading and conversation, where they will discuss themes common to their poems, including femininities, trans embodiment, Jewish thought, and the divine. 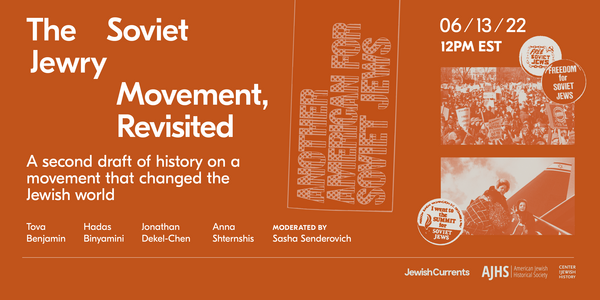 During the decades of the Cold War, North American and Israeli Jews were swept into a movement that advocated for Soviet Jewish emigration and religious freedom in the Soviet Union. From the 1960s until the Soviet Union collapsed in 1991, hundreds of thousands of Jews rallied, marched, and lobbied in the US for the Soviet Jewish cause, in what has been called one of the “most successful human rights campaigns in modern history.” Though the tangible impacts of these efforts are debated, the global organizing campaign is still remembered as a triumphant example of identity-based organizing that affirmed Jews’ relationships to one another across borders—a time when Jews came together to help other Jews.

But was the Soviet Jewry movement really a successful campaign for human rights? In the US, the effort found allies among militant ultranationalist Jews like Meir Kahane and his followers, as well as among a new hawkish wing of the Democratic Party who opposed détente. In Israel after the Six-Day War, the movement advanced the government’s agenda to boost the Jewish population in the burgeoning state. Meanwhile, American activists largely misunderstood the reasons for the “exodus”—attributing the migration primarily to antisemitism rather than the much more common reality of economic pressure and political uncertainty—creating a misconception about the reality of Jewish life in the Soviet Union that persists to this day. In this roundtable, contributors to the 2022 special issue of Jewish Currents will gather to discuss the legacy of the Soviet Jewry movement. Why revisit this movement now? What can the history of the Soviet Jewry movement teach us about Jewish identity and organizing today? How has this movement been remembered? What does the popular story of this history leave out? 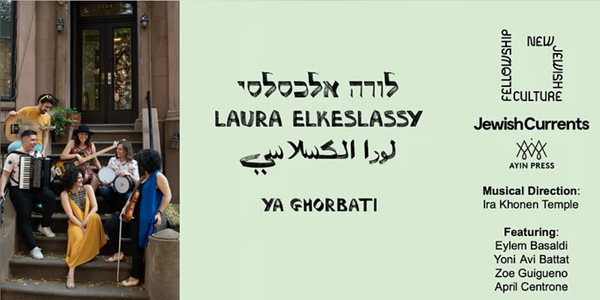 In Ya Ghorbati, singer Laura Elkeslassy musically excavates her family’s history in Morocco, France, and Israel, coming face-to-face with forgotten ancestors and reclaiming a lost family name. Developed in collaboration with music director Ira Khonen Temple and featuring Eylem Basaldi, Yoni Avi Battat, April Centrone, and Zoe Guigueno, this project weaves together the stories of Judeo-Arab divas from the last century with new performances of folk and sacred music. Ya Ghorbati looks across time and space to tell a tale of political upheaval, exile, and displacement—ultimately questioning the supposed binary of Arab and Jew. Read the full story of Ya Ghorbati on Ayin Press!

This event is co-sponsored by the New Jewish Culture Fellowship and Ayin Press.

This is an in-person event taking place at Congregation Beth Elohim (CBE) on 274 Garfield Place in Brooklyn. Masks and vaccinations are required for this event.

The entrance to the CBE Sanctuary is at the corner of 8th Avenue and Garfield Place, with a street-level entrance and elevator access at 271 Garfield Place. For accommodation requests or questions about accessibility, please reach out to info@newjewishculture.org. 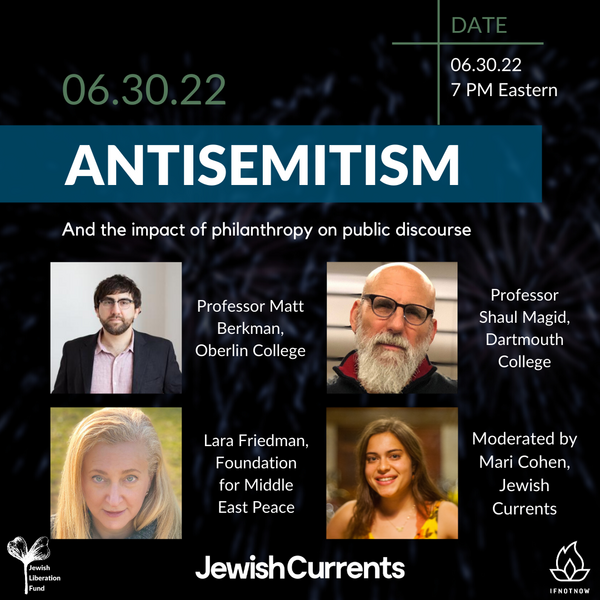 Discussions on antisemitism and its definition are highly contested ground. How does philanthropy impact this conversation? Join Matt Berkman, Shaul Magid, and Lara Friedman, moderated by Mari Cohen, to unpack the forces shaping public discussion on antisemitism and the role of the Jewish philanthropic complex in Jewish political discourse. Co-sponsored by the Jewish Liberation Fund and IfNotNow.

This event is part of “Who Speaks for the Jews?”: A speaker series addressing the question of who holds the power to shape Jewish communal narratives, how they exercise it, and what we can do.