Upcoming Event! Peter Beinart with Dylan Saba and Ethan Katz on the Controversy About Zionist Speakers at Berkeley Law 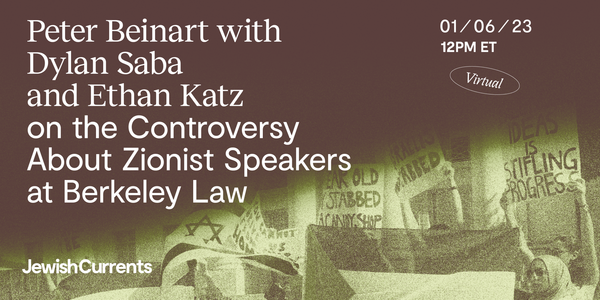 Last year at the University of California, Berkeley, School of Law, nine student groups declared that they would not host Zionist speakers. In part because of that decision, the federal Department of Education is now investigating whether Berkeley is a hostile environment for Jewish students. Join Jewish Currents editor-at-large Peter Beinart for a conversation about the controversy with Jewish Currents contributing editor Dylan Saba—a graduate of Berkeley Law and current staff attorney at Palestine Legal, who has advised the student groups that won’t host Zionist speakers—and Ethan Katz, associate professor of history and Jewish studies at Berkeley and co-founder and co-director of Berkeley’s Antisemitism Education Initiative.

PS. Due to the holiday, the Tuesday News Bulletin will be published tomorrow.