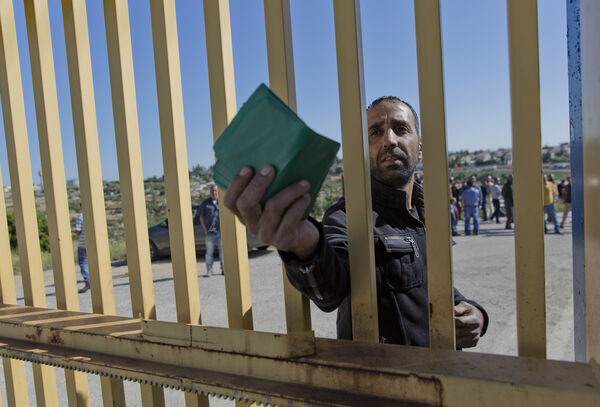 A Palestinian man hands over a group of identification cards to an Israeli army officer near the West Bank city of Bethlehem, April 24th, 2018.

On February 20th, a unit of the Israeli Ministry of Defense called Coordination of Government Activities in the Territories (COGAT) published an ordinance revising its regulations for foreign travel to the occupied West Bank. The document garnered little attention until last week, when the Israeli human rights group HaMoked, which advocates Palestinian rights through legal action, claimed a small victory in Israel’s High Court of Justice: Its petition against the COGAT ordinance—based on human rights law and international humanitarian law—had delayed its implementation from May 22nd to July 5th. The petition, and the publicity it brings to Israel’s two-tiered legal regime, could compel the military to amend the ordinance, “maybe significantly or only cosmetically,” Jessica Montell, HaMoked’s executive director, recently told me. “Obviously we will not be able to change the problem at the heart of the matter: that Israel controls entry into the Palestinian territories, and uses that control to advance its own interests.”

Palestinian-rights advocates say the regulations extend the reach of Israel’s already expansive surveillance of Palestinians, requiring authorities to extensively “pre-screen” diaspora Palestinians as they try to visit their loved ones under occupation. Should the rules take effect, foreigners applying for a visitor’s permit to the West Bank must provide the names and ID numbers of all “first-degree” relatives in the territory, and any other Palestinian residents with whom they might stay, to Israeli authorities. COGAT functionaries, with the approval of their higher-ups, can require a successful applicant to pay upwards of $20,000 in a bank guarantee to gain their permit, a sum subject to confiscation should COGAT find the visitor to have violated any rules. The ordinance reaches deep into the lives of the diaspora Palestinians visiting their homeland. If a traveler begins a romance after arriving, “the authorized COGAT official must be informed in writing (at a special email address) within 30 days of the relationship’s start.”

On Friday, I spoke with Zaha Hassan, a Palestinian fellow at the Carnegie Endowment for International Peace and a human rights attorney, about COGAT’s new policies. This conversation has been edited for length and clarity.

Isaac Scher: What is the purpose of the COGAT ordinance? What is new, and what is a reiteration of prior policy?

Zaha Hassan: The purpose of this is clear on its face: to track and trace foreign nationals and to restrict the travel of those considered undesirable by Israel. Those so considered will need to apply for a visitor’s permit 45 days in advance—preventing them from approaching a border crossing or the airport and possibly preventing their travel completely. There is a laundry list of reasons one could be excluded from Israel or the occupied territories, including that one looks like one might “entrench” oneself in the West Bank, or is engaged in BDS [Boycott, Divestment, and Sanctions] activity, or is considered a security threat. And there’s this catch-all line that “any other relevant considerations” could be a reason for denying entry.

By having this pre-application process, Israel is collecting data on Palestinians’ family members, IDs, and photographs. They will ask, Does the applicant stand to inherit property? Do they own property? Israel is creating a database, what has been called “Facebook for Palestinians,” with all of this information. They’re asking Palestinians to proffer more information so that they can know more about land claims that are adverse to the settler enterprise.

Under the COGAT rules, an American citizen who does not have a Palestinian ID will only be allowed to use the Allenby Crossing, in Jordan, if they have a first-degree Palestinian relative in the West Bank. They will be barred from using Ben Gurion Airport. If they don’t have a first-degree relative and they’re not a journalist or an investor or a student or a professor applying for a special permit—if they’re not in these categories, they have no right to go to the West Bank, unless they can demonstrate a special need and a humanitarian reason. If I wanted to go visit my grandmother or my cousin in the occupied territories, I would need to show some exigent circumstance: that they’re on their deathbed, or I’m going to a funeral. Not even that would guarantee I get in.

Israel is also using pre-screening to exclude people so that there’s no record of a visa denial. This has implications for Israel’s entry into the United States’ visa-waiver program. Israel needs to show that it’s treating American citizens traveling to Israel and the occupied Palestinian territories the same as Israeli nationals are treated when they arrive at an American port of entry. Certain categories of travelers are being directed to the Allenby Crossing, diverted away from Ben Gurion, and they’re going to be processed differently. This is clearly discriminatory treatment. In the context of the visa program, there needs to be reciprocal treatment, and clearly there’s not.

Meanwhile, if you’re a Jewish American traveling to visit your family in an Israeli settlement, you don’t have a problem.

IS: What kinds of claims about Israeli sovereignty does this COGAT policy make?

ZH: From the very start of the occupation, Israel moved to treat the borders of the occupied West Bank as though they were part of Israel’s sovereign territory, using terminology like “Judea and Samaria.” What’s different now is that they have dropped the term “transit,” which means that you’re passing through Israel to go to another area that’s not in Israel. Now they refer to the “Area,” or to “Judea and Samaria,” as they do in many other texts and laws—but they’re not talking about “transit” anymore. It’s all just Israel.

But by definition, Israel has no sovereignty over the occupied territories; that’s what occupation means. They’re not the sovereign. They have to comply with international law, and with the laws of occupation.

Sometimes I hear from State Department officials that every sovereign country has a right to exclude whoever they want; the US does this all the time. So they will say to Palestinian Americans, “Well, you know, Israel is a sovereign country.” That’s really disingenuous. It’s not the same thing as saying “I want to go to Germany, and Germany says it won’t grant a visa.” That’s different from telling someone who’s already been denied the right to live in their country that they also have no right to go back and see their family or deal with their property. And it overlooks the reason many Palestinians with family connections try to enter the West Bank: They lost their residency in 1967, when the occupation began. 140,000 Palestinians were outside the occupied territories at the time and didn’t have a right to a residency permit. Some of them have been able to get residency, which means basically an Israeli-issued ID number, but most of them haven’t. They’re the ones who have family members, who own homes there, and who have to get visitor visas to go to their home.

IS: The COGAT ordinance requires that travelers disclose their ownership of land in the West Bank, or the possibility that they will inherit land. Could these disclosures aid Israeli dispossession of Palestinian property?

ZH: You have to think about it in conjunction with the other laws on the books, and with the military orders. If someone discloses that they have land in Area C, where Israel has built and plans to expand its settlements, on their application, then maybe Israel won’t let them in. There are military regulations that say, “If the land isn’t being used, Israel can take it for its beneficial use.” A lot of the land in Area C is not registered, and Palestinians aren’t allowed to register it. Israel will say, “Nobody has a claim here,” or “The person’s outside the country, so we’re going to use it.” That’s how Palestinian land gets taken already. They could do that with a Palestinian foreign national.

IS: What are the policy’s restrictions on students and teachers?

ZH: There’s going to be a limit of 150 foreign students who can study in Palestinian universities. That doesn’t just mean those in the Palestinian Authority-controlled areas; it also includes East Jerusalem, which has been annexed by Israel. What’s the quota of foreign students coming to Israeli institutions? I don’t think there is one. If you’re an American student and you want to study in Jerusalem, it’s going to depend on whether you’re going to Al Quds University or Hebrew University. It’s very discriminatory.

Professors will have to hold a doctoral degree to apply, and they can’t stay more than one academic year. They would have to leave for a period of time if they wanted to come back and teach again. There are opportunities for a longer stay, if you are considered a distinguished researcher, defined as someone COGAT believes will benefit the economy of the area, or promote regional cooperation and peace, or have some significant academic success. Only 100 of those allowed in. It’s incredibly limiting, obviously. It’s going to prevent Palestinian institutions from benefiting from professors from abroad.

IS: As a Palestinian, how have you reacted to the ordinance?

ZH: The rules say that if you go for a visit, you can’t reapply for a visitor’s visa for nine months. In the past, there were years I would go as many as three times, for a conference or to visit family or to bring delegations. And I won’t be able to do that now.

IS: To what extent does the ordinance target journalists, human rights workers, and solidarity activists?

ZH: There isn’t actually an avenue for human rights workers to get entry, because there’s nothing in the rules about that. COGAT limits the entry of staff from charitable organizations and religious organizations, but even their stay is limited and has to be approved.

Journalists in particular will have no problem if they’re staying in Israel; if they’re also going to the West Bank, they can apply for a short-term visa, but they still have to go through a pre-screening process. Some journalists with a history of certain kinds of coverage may not get cleared.

IS: I’ve heard of journalists leaving the region through Ben Gurion Airport, having their critical writings discovered by security officers, and getting banned from Israel for ten years.

ZH: My question is this: If Israel is treating the whole area as its sovereign territory, what’s the difference between a journalist staying in Israel versus the West Bank? Are they afraid journalists will be sympathetic if they live among the occupied population? 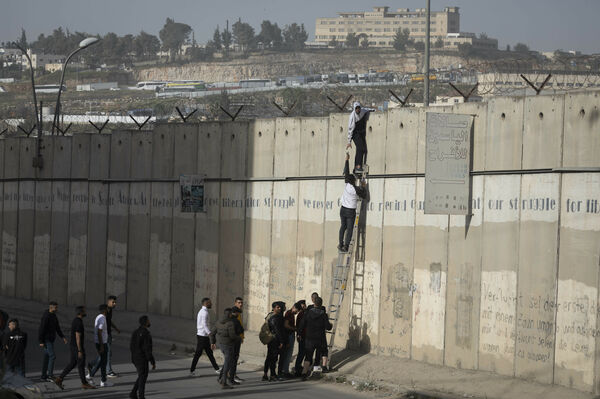 On April 29th, Palestinian youth cross the Israeli separation wall in the West Bank town of A-Ram to attend the last Friday prayer of Ramadan at Al-Aqsa Mosque, in Jerusalem. On every Friday of Ramadan, the Israeli military allows women of all ages and men over 50 to enter without obtaining a movement permit. Boys and men ages 12 to 50 must have a permit to attend the mosque.