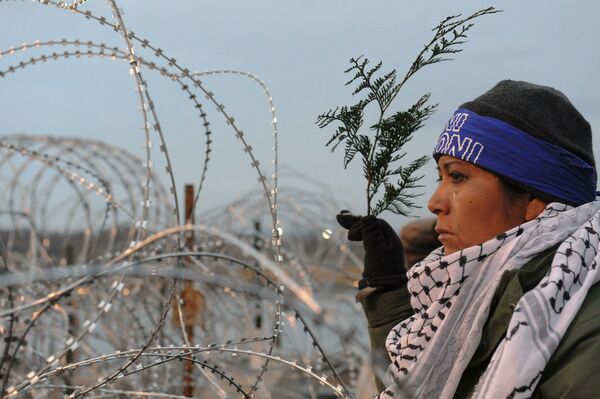 A woman holds a branch of cedar during during a protest against plans to pass the Dakota Access pipeline near the Standing Rock Indian Reservation, near Cannon Ball, North Dakota, November 27th, 2016

(note: Senior Reporter Alex Kane is on paternity leave; this is a guest post from Jewish Currents contributor Isaac Scher)

On March 30th, the NDN Collective, a prominent grassroots Indigenous group based in South Dakota that advocates self-determination for Native peoples, published a position paper on Palestine. Released to coincide with Land Day, an annual commemoration of Israel’s 1976 killing of six Palestinians who protested the state’s confiscation of land, the text argues that Palestinian and Indigenous American movements share aims and opponents. The forced expulsion of Palestinians and the expropriation of their land, the authors write, “is all eerily similar to our own history.” As Palestinians call for “the right of return” to the places from which Zionist violence expelled them, Indigenous peoples in North America seek “Landback.” The paper weds the two projects, making the titular claim that “The Right of Return is LANDBACK.”

“In the same ways [that] Manifest Destiny has authorized the genocide and removal of Indigenous Peoples in the so-called United States based on divinity and superiority, so too does the Zionist settler project,” the paper says. “We look to our Palestinian relatives who, like us, continue to demonstrate the power of resistance against colonialism and occupation.”

The paper recognizes land as the basis of any politics, the site upon which relations are formed and, under colonial regimes, severed. “The land convenes us,” the paper says. “By removing people from their land, you remove them from their natural development, their medicines, their relationships, and their culture.” Nick Tilsen, president of the NDN Collective and a citizen of the Oglala Lakota Nation, emphasized the parallels between the two movements. “We have seen what colonization looks like on this end of things,” he told Jewish Currents. “When I see Palestinians struggle, I feel it, the same way that I do when I see my own people suffer.”

Mezna Qato, a historian whose family is from the northern West Bank, credited the paper with providing “an intellectual armature for what I think has until now been mostly rhetoric,” such as protest chants that demand liberation “from Standing Rock to Palestine.” The NDN Collective’s work “affirms an expanding literature that brings Palestine into conversation with Indigenous scholarship, explicitly in—and I have to emphasize this, since Palestinian scholarship is [also] produced in Latin America and the Arab world—the Anglophone world,” she said.

The NDN Collective was motivated in part by a desire to counter Zionist uses of the concept of indigeneity. Since the earliest days of the Zionist project, its adherents have used scripture as evidence of an ancestral claim to Israel/Palestine. “The Zionist state is currently in the process of ‘red-washing’ propaganda,” the paper says, “claiming that Israelis are Indigenous to Palestine, despite the origins of Zionism as a 19th century settler colonial movement for white Ashkenazi Jews from Europe.” As two authors who support Israel wrote in The Forward, in a piece framed as “the tribal case for Israel,” “Supporting Israel means supporting indigenous rights.” (The indigeneity claim has been leveraged by Mizrahi and Sephardi supporters of Israel to reshape ethnic-studies curricula in US high schools.)

This is not the NDN Collective’s first foray into Palestine solidarity activism. Earlier this year, the organization joined a coalition of Palestine-advocacy groups in calling on the Sierra Club, a prominent environmental organization, to cancel two planned trips to Israel. The coalition charged the organization with “greenwashing,” a kind of propaganda that uses Israeli environmentalism to distract from Israeli violence.

Tilsen notes that there is “a legacy of our movements feeding off each other.” In the past decade, Palestinians and Indigenous peoples have locked arms in opposition to major fossil-fuel infrastructure plans in North America, like the Dakota Access Pipeline and Canada’s Coastal GasLink project. The political connection of Palestinian and Indigenous American movements was forged in the 1970s, during the ascendance of anticolonial and Third-World coalitions, Robert Warrior, a scholar of American Studies and a citizen of the Osage Nation, told Jewish Currents. In 1974, Dennis Banks, the leader of the American Indian Movement, met with the Palestine Liberation Organization (PLO). The PLO offered to support Banks, who was in the midst of leading an armed takeover of Wounded Knee, South Dakota, to protest the US government’s disregard for its treaties with Native Americans as well as corruption within the Oglala Sioux’s leadership.

In its position paper, NDN does not take up the history of Banks’s alliance with the PLO, or weigh in on Palestinian or Indigenous American histories of violent opposition to colonialism. “​What I find interesting is the erasure of Palestinian fighters,” Qato told Jewish Currents. “You have these histories—Wounded Knee, the Mohawk rebellion—which Palestinians followed and supported . . . By elision, what are you saying about the kinds of resistance that Palestinians have taken up? There’s a weird way in which certain forms of Palestinian resistance are speakable in English, and others are not.” Tilsen said NDN intentionally focused on other points of contact between the two histories. “When we’ve taken up arms, or occupied buildings, [opponents] decide to address our tactics as a reason to erase our cause,” he said. “So we made a conscious decision not to center those things, because the other side chooses to center them.”

The paper’s central focus is the unification of Palestinian and Indigenous American struggles. “The right of return and LANDBACK are both promises that . . . we will outlast colonial governments and laws imposed on us and our relatives, and live in right relations back where we are from,” the paper says. “When Indigenous Peoples exclaim LANDBACK, it is because we understand what it means to live in good relationship with the land, air, water, and our non-human relatives.”

Nadya Tannous, a Palestinian organizer with the NDN Collective, whose family is from Yafa and Lydda (in Hebrew, Jaffa and Lod), said both movements must work against the violent fragmentation of peoples subject to settler colonialism. “Landback is the literal return of land, and of everything that was stolen from Indigenous people,” she said. “In the case of Palestinians, we’ve been robbed of the uninterrupted connection to the land and to each other. That’s why the right of return is such a powerful demand; it’s what a dignified future looks like.” 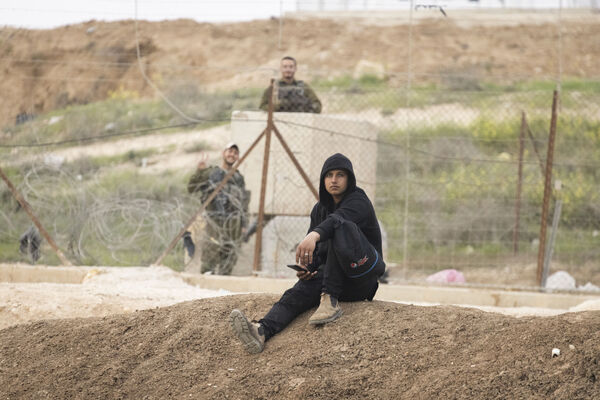 The Israeli military has severely restricted the movement of West Bank Palestinians in the days after several Palestinians killed 11 Israelis. In this photo taken on April 3rd, Israeli soldiers prevent Palestinian workers from crossing through a damaged section of the separation fence near the West Bank checkpoint of Meitar, near Hebron.

As part of the Tuesday News Bulletin,Jewish Currents is publishing a photograph taken by members of Activestills every week, archiving ongoing dispossession and resistance from the river to the sea. You can find more information on this collaboration here.