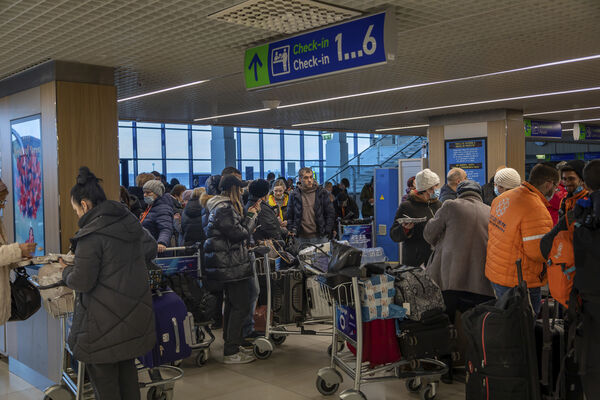 Over 100 Ukrainian refugees wait for a private jet to fly them to Israel, Chisinau, Moldova, March 13th, 2022.

(note: Alex Kane will be taking paternity leave for the next 12 weeks; this will be his last Tuesday News Bulletin until he returns, but the feature will continue with guest contributors)

Russia’s invasion of Ukraine has set off a historic refugee crisis. Nearly 4 million Ukrainians have fled their homes to escape Russia’s onslaught, making this the sixth-largest refugee outflow over the past 60-plus years, according to a Pew Research Center analysis. The vast majority of these refugees have stayed in Europe, where most have been given temporary protection that includes a residence permit, education, and the right to work. But about 18,000 Ukrainian refugees have fled to Israel. Thanks to Israel’s Law of Return, Ukrainian Jewish refugees have a fast-track to citizenship. However, about two-thirds of the refugees arriving to Israel are not Jewish, making the prospects for citizenship in Israel extremely difficult.

Israel’s approach to Ukrainians has dramatically changed in recent weeks, from an initial policy of setting a strict cap on the number of non-Jews permitted to enter, to a more permissive policy of allowing non-Jewish refugees to gain rights as long as they have Israeli relatives. To learn more about Israel’s shifting policy toward Ukrainian refugees, the law governing deportations of refugees, and the difference in how Israel treats Ukrainian refugees compared to refugees from countries like South Sudan and Eritrea, I spoke with Ayelet Oz, the executive director of the Hotline for Refugees and Migrants—the leading group in Israel protecting the rights of refugees, migrants, and victims of human trafficking. This conversation has been edited for length and clarity.

Alex Kane: What work has the Hotline for Refugees and Migrants done with Ukrainian refugees?

Ayelet Oz: We’ve been mostly focusing on trying to steer Israeli policy in the right direction this time. We know what happens historically when you have a refugee crisis and you don’t deal with all the difficult questions when it starts: What happens is that the situation dramatically deteriorates.

So this time, starting even before the first day of the fighting, we’ve been pushing the government to make the policy better. And I would say, with all the criticism that I still have, that what Israel is giving to these refugees is unprecedented. It’s actually quite amazing, and I’m really grateful for the way the government is reacting at the moment. Now they’re presenting a very responsible and pro-refugee approach.

AK: Can you explain what has shifted?

AO: At first, it was a huge mess. People had to put up bail in order to support their relatives or friends coming over, which was very problematic, because it really differentiated Israelis who could afford to put up 10,000 shekels immediately from those who couldn’t. That policy was then canceled.

Then there was the problem of quotas. [Minister of Interior] Ayelet Shaked said we are going to set a quota allowing a total of 5,000 non-Jews to come. The problem was that the quota was filled so quickly; it was reached before the policy even went into effect. But then they changed it. Now, the policy is that if you have a close relative in Israel, it’s not counted as part of the quota. So the quota is only for refugees who don’t have anybody in Israel to invite them.

Most people who come to Israel have Israeli relatives. For now, it seems to be a theoretical quota. We’re not getting even close to it, because for most people, if you don’t have anyone in Israel, you go to Europe, which gives broad protection to refugees from Ukraine.

The government really embraced what we’ve been saying for a long time, which is that you cannot invite refugees without giving them some basic rights. If you bring people with no rights, they will be victims of exploitation, or trafficking, or poverty. So there’s this bundle of rights for all the non-Jewish refugees who have entered: They get basic housing, mental health support, basic medical support. The government is trying to fight human trafficking as much as possible.

AK: Earlier this week, an Israeli judge ordered Israel’s Population Authority not to deport any Ukrainian refugee without giving them 48 hours to appeal the ruling. Is Israel deporting Ukrainian refugees, or is that just a theoretical ruling?

AO: It’s not a theoretical issue at all. This is one of the biggest faults still in the policy, and we are pushing for it to change. There are cases where refugees have Israeli family members who are not citizens. One of the most heartbreaking examples was of a person working in Israel in construction. His wife and two kids fled Ukraine, and they wanted to come here, but they were rejected and deported because the government told them, “No, you cannot actually join your father here because we are afraid you’re going to establish a home in Israel. And we don’t want that because you’re just migrant workers.” So they actually deported them [back to Europe]. No one comes directly from Ukraine. They come from the surrounding countries, and that’s where they’re sent back.

In another case, there were two children, ages 14 and 18, who came to their mother, a migrant domestic care worker. And again, they were deported so the mother won’t establish a life in Israel. This is ridiculous. These people are refugees, the only relatives they have are here, and it just makes no sense whatsoever to deport them and have them all alone in Europe. It’s even more scary because of the enormous risk of human trafficking.

AK: Where do the refugees live when they first get to Israel, and where do they ultimately go?

AO: Most of them come to their Israeli relatives. But as the situation progresses, the government is starting to look for temporary housing for them. You can live with your relatives for a week or two, but that’s not sustainable. There’s also a call to give refugees temporary work visas. I am quite optimistic that Israel will implement this idea and then refugees will be able to support themselves.

One of the reasons the policy continually changes is that, at first, the government thought the war was a blip—that six days later, everything would be over. Now, they’re starting to understand this could go longer, and people will need a place to stay and not be able to go back for longer than expected. So we need to find something much more sustainable.

AO: The amazing policies I mentioned, assisting with housing and everything, are only for Ukrainians who entered after February 24th [when Russia invaded Ukraine]. But one of the areas we’re pushing for—and what we’ve heard in the Knesset has been more positive than I assumed—is that now is the time to set a general protection policy for Israel. There will be similar wars in the future. Now is the time to set up a general temporary protection system, which is absent at the moment. In Europe and the US, they just had to turn the switch on for temporary protection. The policies were already in place, and the governments just needed to initiate them.

None of this exists in Israeli law. We are trying to push for that bundle of rights, and I do hope we will be able to use this historic opportunity to make that happen. I think it will make us a much better country than we are at the moment.

AK: Right, whereas in the past, refugees from South Sudan and Eritrea have been placed in big detention camps. There’s nothing like that for Ukrainian refugees.

AO: They were either put in prison, or they were sent with a one-way ticket to Tel Aviv to sleep on the streets. That was the reaction a decade ago, and we saw how the coronavirus crisis impacted this community in the past two years. It drove people to hunger within a few weeks, because they were so poor, with no protection or safety. We know what happens when you don’t deal with this question. What you see is a humanitarian crisis. So I do hope that we got the message that if you want to make refugee policy sustainable, you have to deal with this question. Refugees don’t go away. The problems don’t solve themselves. 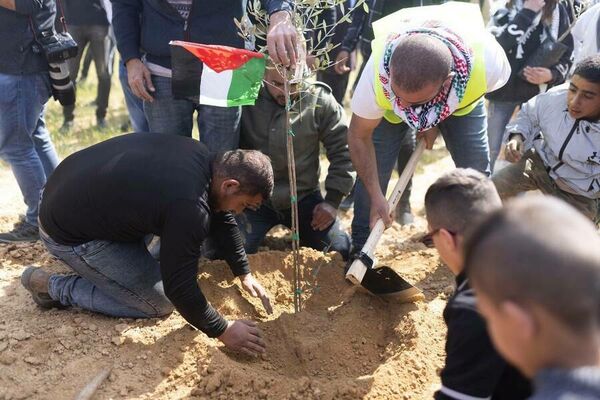 On March 26th, Palestinians commemorated Land Day in the village of Sa’wat Al-Atrash, in the Naqab (Negev) region of Israel. Land Day is marked every year to commemorate the day in 1976 when six Palestinians were killed and hundreds were injured in the Galilee while protesting Israeli land confiscation in favor of Israeli settlers. The March 26th event was held in Al-Naqab following recent tensions between locals and Israeli authorities after locals have had their agricultural crops damaged and lands raided repeatedly by Israeli authorities.

As part of the Tuesday News Bulletin,Jewish Currents is publishing a photograph taken by members of Activestills every week, archiving ongoing dispossession and resistance from the river to the sea. You can find more information on this collaboration here.