(Note: this is a guest post from Dana El Kurd, an assistant professor of political science at the University of Richmond.) 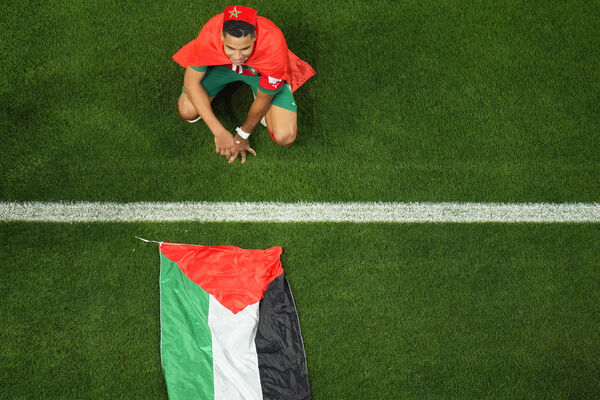 Morocco’s Abdelhamid Sabiri celebrates alongside the Palestinian flag after a match between Morocco and Spain at the World Cup in Qatar, December 6th, 2022.

At the World Cup, symbols of Palestinian solidarity have been ubiquitous. In Doha’s public squares, crowds cheering Arab teams to victory have broken out into pro-Palestine chants and songs like “Mawtini,” the Palestinian and Arab anthem. Euphoric spectators have draped the Palestinian flag across their shoulders and waved it during matches. One Tunisian fan even ran out onto the pitch with the flag, interrupting a match between his country’s team and France.

These displays of solidarity are the product of months of careful planning by activist groups, most notably Qatar Youth Opposed to Normalization (QAYON), a group formed in 2011 to pressure the Gulf and Qatari governments to halt the process of normalizing ties with Israel. Maryam AlHajri, a member of QAYON, told Jewish Currents that the group saw this year’s World Cup as an opportunity to amplify its message and turn the Arab fans attending the matches from sympathizers of the Palestinain cause into active participants in the movement. Now, with the World Cup final approaching, it’s clear that the group’s anti-normalization message was like a match on dry grass. As one member of QAYON, who asked for anonymity for safety reasons, put it: “What the group is doing would not have succeeded had it not been for the people’s own proactive support of the Palestinian cause.”

As AlHajri explained, QAYON has viewed the games as a “defining moment” to rally people to the Palestinian cause. Failing to do so, they believe, would only bolster the normalization of ties between Arab nations and Israel. This is especially the case in the aftermath of the Abraham Accords, a treaty signed between Israel and Qatar’s neighbors within the Gulf Cooperation Council, and, later, Morocco and Sudan. It established official diplomatic ties between these countries and Israel and promised political, security, and economic coordination. Yet most Arabs oppose normalization with Israel absent a resolution on the issue of Palestinian statehood. In the latest Arab Opinion Index polling on this question, 88% of Arabs across 13 countries rejected normalization with Israel. Nearly 65% of those respondents cited the occupation of Palestinian or other Arab lands as their reason for opposing normalization; only 7% cited religiously motivated antipathy.

Thus far, many of QAYON’s attempts to stop soft normalization have failed. The government of Qatar foiled the group’s effort to bar Israelis from entering the country to attend expos and the World Cup. In response, QAYON mobilized Qatari citizens and Arab expats to more forcibly express their disapproval of normalization. The objective, AlHajri said, was to make it “difficult for the government, FIFA, or the occupation government to demand more in terms of normalization,” she said.

Weeks before the Qatari national team’s first match against Ecuador, QAYON persuaded a number of team members, including the captain, to wear keffiyeh-patterned armbands in support of Palestine. Soon, Qatari influencers like Ibrahim al-Baker and prominent journalists like Muna Hawwa took to social media to share their support for the campaign and to popularize the keffiyeh armband. People attending the matches wore them. Others posted about them on social media.

Meanwhile, QAYON pushed the Qatari national team to end its contract with Puma, the sponsor of the Israel Football Association. QAYON called on local businesses in Qatar to place signs in their windows identifying them as BDS compliant. It organized fans to chant for Palestine at the 48-minute mark of each game (“With soul, with blood, we will defend you Palestine!”), wave the Palestinian flag, and wear t-shirts emblazoned with the text “Love Football, Hate Apartheid.”

Journalists reporting on the World Cup have noted, with some surprise, the climate of intense support for Palestine. Israeli media in particular has bemoaned the ire of Arab fans, with one reporter remarking “it’s not just governments, as we once assumed.” Videos of Arab fans—Saudi, Lebanese, Moroccan, and others—disrupting Israeli broadcasts from public squares have gone viral. As a result, reporters from Israel had to mask their logos, and have been caught on camera claiming to be from other countries in order to get interviews. Here too, QAYON played a role, identifying Israeli journalists and their outlet logos on their social media channels.

So effective were QAYON’s calls that they sparked independent initiatives, including a Palestine solidarity march on November 19th through Lusail Boulevard, a popular thoroughfare for World Cup watchers. Hundreds of people attended, activists told Jewish Currents. QAYON has also coordinated with Arab civil society groups such as the Palestinian Campaign for the Academic and Cultural Boycott of Israel (PACBI), BDS Movement in the Gulf, and informal groups from other countries. They have hosted panels discussing what experts call “sports normalization”: encouraging ties between Israeli and Arab citizens in the name of seemingly “apolitical” venues like sports. Using the World Cup to advance the Palestinian cause, QAYON argued, was legitimate. “Western political boycotts of Russia extended to many sporting events,” their statement read, “and we did not hear any voices calling for separating these sporting competitions from politics.”

QAYON was in fact so successful that Qatari officials attempted to co-opt their campaigns and tactics, particularly the keffiyeh armband initiative. Many Qataris were angered by a campaign organized by ten European teams to wear “One Love” armbands in support of LGBTQ rights, targeting Qatari laws criminalizing homosexuality. In response, Qatari academics and media personalities began wearing the Palestinian keffiyeh armband popularized by QAYON as a means of highlighting what they viewed as Western hypocrisy, focusing on some issues of social justice, while ignoring others. Some reporters mistakenly assumed that the Palestinian flag initiatives were themselves a response to the pro-LGBTQ campaign. AlHajri pushed back on Twitter: “This instrumental use of the Palestinian cause is shameful,” she wrote.

Perhaps the most important takeaway from the events surrounding the World Cup is the signal they send to Arab governments. Not everyone embracing the Palestinian cause during the World Cup has done so because of QAYON’s efforts. Many have embraced the campaign because of the intense anger over Arab governments’ normalization agreements with Israel. Undemocratic Arab governments have pursued normalization deals despite the fact that they have done little to help their citizens. Trade between signatories of the Abraham Accords and Israel has fallen far short of projections made by Israeli officials. One academic from the UAE who asked to remain anonymous to protect their position told me that Emiratis are increasingly worried about their economic conditions, and their inability to effectively compete on the market: “Dubai is booming but regular Emiratis are not benefitting.” In addition, it’s no longer clear to many Arab citizens what they can and cannot say publicly about Palestine. Emirati activists involved in anti-normalization activities in the months following the Abraham Accords became the targets of renewed surveillance efforts. Those who spoke out about the Accords faced travel bans. NGOs in Bahrain have also been newly banned from engaging in pro-Palestine activity, such as lectures, panels, and demonstrations. As a result of these dashed promises and crackdowns on speech, normalization has only served to solidify discontent among Arab citizens.

“In recent years, some Arab rulers seemed to have an interest in writing a new narrative about Palestine, in lowering the importance of Palestine among their public, in part because they’ve increasingly started to see the issue as a tool in the hands of the opposition to their regimes,” University of Maryland professor Shibley Telhami told Jewish Currents. He noted that the Morrocan team’s choice to raise the Palestinian flag in a galvanizing “moment of euphoria” following its stunning victory over Portugal, is a message that these attempts to diminish identification with the Palestinian cause have failed. When given the opportunity to express this discontent in the liminal space of the World Cup—an arena with high media visibility, low reach of their own regimes, and the anonymity of the crowd—people are taking it. This is why AlHajri described these acts of solidarity as “liberatory,” not just for Palestinians, but for citizens of the Arab world themselves. 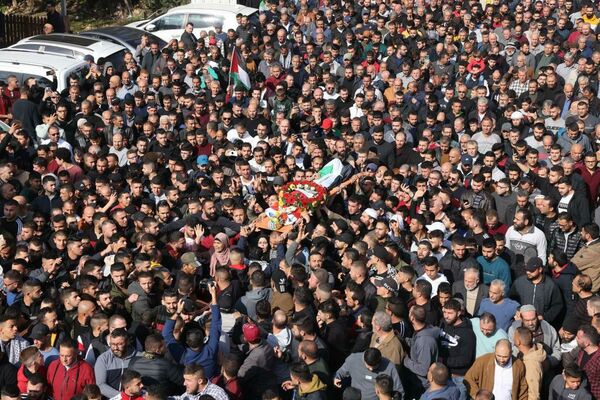 Palestinians carry the body of 16-year-old Diaa Al-Rimawi, shot by Israeli forces on December 8th, during his funeral the next day in the West Bank village of Beit Rima, west of Ramallah. Photo: Oren Ziv/Activestills.