(Note: this is a guest post from Jewish Currents contributing writer Elisheva Goldberg) 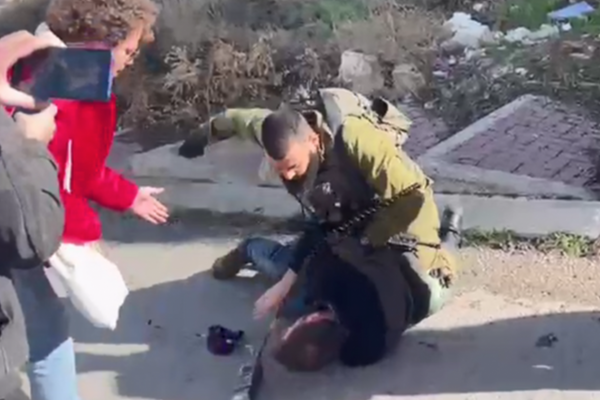 Courtesy of Breaking the Silence

On Friday, November 25th, Israeli soldiers verbally and physically attacked left-wing religious Jewish activists—Israeli citizens—in the city of Hebron in the occupied West Bank. One of the soldiers taunted the activists, vowing that Itamar Ben-Gvir—the Kahanist lawmaker who is expected to become Minister of National Security in Israel’s new right-wing government—would “make order here.” “You’re through,” the soldier promised. Another soldier put one of the activists in a chokehold, punched him in the face, and stuck a loaded gun in his back. “They were like thugs with guns,” Mikhael Manekin, a longtime activist who was present on the scene, told +972 Magazine.

The assault stoked a national debate over the position of the Israeli armed forces in society and politics—raising basic questions about what they should be allowed to say and do. Aviv Kochavi, IDF chief of staff, wrote a public letter denouncing the soldiers’ behavior. Two soldiers were suspended. The one who taunted the activist was sentenced to 10 days in military prison by his commander, a punishment Avner Gvaryahu of the veterans’ organization Breaking the Silence called “a slap on the wrist” in an interview with Jewish Currents. Ben-Gvir, on the other hand, decried the punishment as “not reasonable,” “disproportionate,” and “inappropriate.” The soldier who punched the activist is currently awaiting military trial.

The public split between Kochavi and Ben-Gvir showcased an increasingly dramatic ideological and socioeconomic cleavage in Israeli society. “Kochavi is perceived as a symbol of the army of high-tech,” Manekin said—that is, the army of the elite, who tend to fill the IDF’s intelligence and cyberwarfare units. Meanwhile, “Ben-Gvir—who didn’t even serve in the army—is the symbol of the ground troops.” (Ben-Gvir was exempted from service due to his extremist views and association with the Jewish supremacist activist Meir Kahane.) In other words, from the standpoint of many enlisted soldiers, Ben-Gvir stands for the little guy—and for empowering the little guy to act with impunity. He campaigned on making the army’s already lax open-fire rules even more permissive, and on granting soldiers immunity from prosecution should they commit violent crimes against Palestinains. Last month he put his position bluntly: “If they throw stones, shoot them.”

Ziv Stahl, executive director of Yesh Din, an organization that tracks human rights violations in the West Bank, agrees that Ben-Gvir’s rise encourages violence. “A soldier that knows he can do whatever he wants and no one will prosecute him, no one will hold him accountable, will likely use violence more easily than before,” she said in an interview with Jewish Currents. Stahl believes that this atmospheric shift has already led to the use of more lethal force on the ground. She noted that in the last month, there has been “a definite rise in Palestinian death from lethal injuries.” Back in October, the UN Mideast envoy said that 2022 is on course to be the deadliest year for Palestinians in the West Bank since the institution started tracking fatalities in 2005. The UN’s latest figures, which run through the third week of November, count 168 Palestinians killed by Israelis so far this year, including more than 130 in the West Bank; media and human rights organizations report at least ten more killed in the West Bank in the past week alone.

The attack on the activists occurred on the heels of a coalition deal, signed by presumptive Prime Minister Benjamin Netanyahu, that also pitted Ben-Gvir against Israel’s top military brass. The agreement grants Ben-Gvir authority over parts of the Border Police which had previously operated in the West Bank under the authority of IDF leadership. In other words, Ben-Gvir’s authority over the Border Police fractures the military’s monopoly on power in the West Bank. Benny Gantz, Israel’s outgoing Minister of Defense and former IDF chief of staff, warned that Ben-Gvir’s newfound authority over the Border Police risked politicizing the entire security system and causing “serious harm,” likening the move to Ben-Gvir “establishing a personal militia.”

Meanwhile, many combat soldiers have celebrated Ben-Gvir’s ascent. Yagil Levy, professor of political sociology and public policy at the Open University of Israel, argues that Ben-Gvir’s message resonates in part because of a long-standing class divide within the IDF. The cyber and intelligence units that tend to be filled by the Israeli elite—who are often associated with the political center and left—provide an alternative to draft-dodging and a pathway to a career in Israel’s lucrative high-tech sector, Levy says. By contrast, the combat units that draw mainly from Israel’s socioeconomic and geographic periphery offer little prestige or professional benefit in exchange for doing the army’s dirty work. In a recent opinion piece for Haaretz, Levy wrote about the profound frustration of combat soldiers, who feel that they receive the blame when the army fails to prevent the deaths of soldiers, and complain that their “hands are tied” by the army’s rules of engagement. Levy says that these same combat soldiers see Ben-Gvir as their champion. “He treats them as castrated heroes, prevented from triumph by the politicians,” he said, and endows “blue-collar policing with the significance of a national mission . . . Suddenly these soldiers feel that their work matters, and they stand up straighter.”

Not only are Ben-Gvir’s new executive powers likely to influence the behavior of soldiers on the ground—they also serve to formalize a de facto one-state reality. This past Monday, Ben-Gvir’s running mate, Bezalel Smotrich, head of the Religious Zionism party, signed a separate coalition agreement with Netanyahu, which gives his party unprecedented power to appoint the heads of various bodies responsible for the government’s civil policy in the West Bank—bodies previously under the full authority of the army. Like Ben-Gvir’s coalition agreement, Smotrich’s agreement takes power away from the military and puts it into the hands of elected politicians. But the people governed by Israel in the West Bank did not elect Smotrich or Ben-Gvir. Nor, of course, did they elect Israel’s military commander, who has long acted as sovereign in the occupied territory. But the partial shift from military to political authority in the West Bank signals Ben-Gvir and Smotrich’s intentions to make Israeli domination there an official as well as de facto reality. As Stahl told me, when the keys to Palestinian lives are handed to Israeli politicians, it is “a big step towards annexation.” 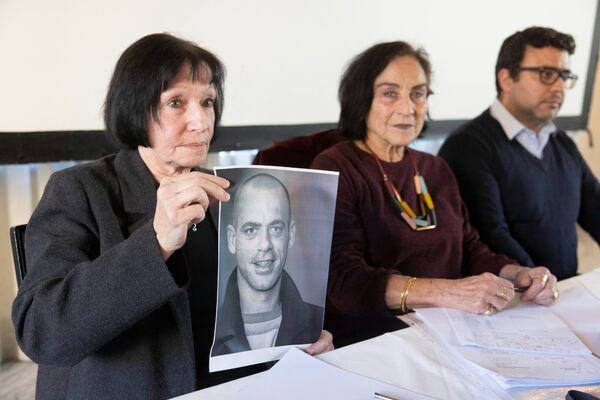 Denise Guidoux (left), the mother of French Palestinian lawyer Salah Hammouri, gives a press conference with Hammouri’s attorney, Leah Tsemel, in Jerusalem on December 2nd. The previous day, Israel’s interior minister announced that Hamouri, who has been detained without charge in an Israeli prison since March, will be deported to France. Amnesty International said the forced deportation would constitute a war crime. Photo: Oren Ziv/Activestills