Last week, Ofer Cassif and Aida Touma-Sliman, two members of the Knesset from Hadash—the Arab-Jewish socialist political coalition—declined to attend Ukrainian President Volodymyr Zelensky’s speech to Israeli parliamentarians, which was also broadcast in Tel Aviv’s Habima Square. In a tweet, Cassif explained his reasoning: “I don’t take sides in a needless war that harms innocent civilians, strengthens people in power and enriches the lords of war. I do not support nationalists and persecutors of the communists in Ukraine, and no, neither do I support Putin and the Russian communist-hating nationalists. No to war—yes to peace.” Cassif and Touma-Sliman were widely criticized for their position, which seemed to put the left-wing stalwarts in the same camp as the Israeli right, much of which has also attempted to avoid taking sides in the war in Ukraine.

The MKs from Hadash are among the most dogged opponents of Israel’s occupation of the West Bank; to many, their at best equivocal condemnation of Russia’s invasion of Ukraine seemed at odds with their vocal critiques of militarism and state violence. But this is not the first time that Israel’s anti-imperialists have faced what they perceived as an unenviable choice. Since the Syrian uprising in 2011, Hadash—and the Communist Party (MAKI) that forms a central component of it—has attempted to walk a uneasy line between opposing Western intervention and Islamist militancy and supporting the brutal (and Russian-backed) Assad regime.

To understand the broader history of the Israeli left’s relationship to Russia, the Soviet Union, and anti-imperialist politics in the Middle East, for this week’s newsletter I spoke with Joel Beinin, professor emeritus of history and Middle East Studies at Stanford University, and an authority on social movements, political economy, and the left in Egypt, Palestine, and Israel. Beinin is the author of many books, including The Dispersion of Egyptian Jewry: Culture Politics, and the Formation of a Modern Diaspora; Workers on the Nile: Nationalism, Communism, Islam, and the Egyptian Working Class, 1882-1954; and Was the Red Flag Flying There? Marxist Politics and the Arab-Israeli Conflict in Egypt and Israel, 1948-1965. Beinin himself was involved in left-wing politics in Israel during the 1970s as a member of SIACH (the Hebrew acronym for “Israeli New Left”). We discussed the rich and complex legacy of communist politics in Israel, the meaning of the Soviet Union during the early decades of the Israeli state, and the current state of the Israeli left. Our conversation has been condensed and edited. 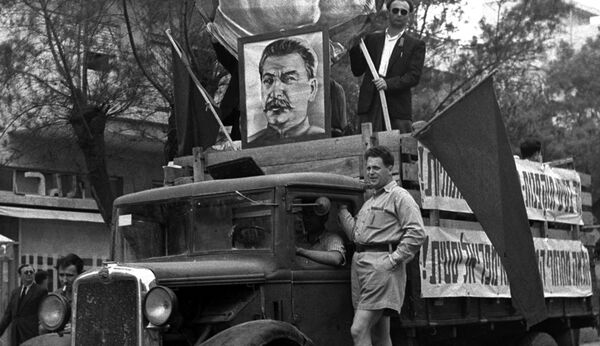 A truck with the faces of Soviet Communist leaders Lenin and Stalin at the labor day parade held in Tel Aviv, May 1st, 1949.

Joshua Leifer: Why do you think the Hadash MKs felt they needed to make this kind of statement? Surely, they knew how unpopular this would be.

Joel Beinin: First, to understand this fully—Hadash is not a party. It’s an electoral front in which the Communist Party of Israel is the single most important element, and if I’m not mistaken, Cassif and Touma-Sliman are both members. So not all Hadash members would necessarily take the same stand that they did. The Communist Party of Israel is a very old party. Its roots go all the way back to what was an all-Jewish Communist Party, established in the early 1920s, in British Mandate Palestine. For that party, loyalty to the Soviet Union—and residually, to Russia, even though the Party could easily have broken that plank when the Soviet Union collapsed—has always been a very central ideological element.

I think it’s fair to say that the Communist Party of Israel, historically, was one of the most dogmatic in the world in terms of its pro-Sovietism. This ideological commitment played a very important role in what became a binational party by the 1930s, when substantial numbers of Arab members joined; the party would have said that pro-Sovietism tempered both Arab nationalism and Zionism. The argument was that the party’s commitment to the line of the Third International when it existed, then the Cominform, kept the party united until it split, in 1965, into two parties: MAKI (the acronym for the Communist Party of Israel) which was the Jewish-dominated faction, and RAKAH (the New Communist List), which was predominantly Arab. But there were always Jewish members of RAKAH, and they made sure throughout their existence to keep a Jew high enough on their parliamentary electoral list to be elected to the Knesset. In 1977, Hadash—in Hebrew, the Democratic Front for Peace and Equality—was formed as an alliance between RAKAH and the Israeli Black Panthers. Eventually, in 1989, by which point the old MAKI had totally disappeared from the scene, RAKAH reclaimed the party name, MAKI, which today is the only Communist Party in Israel.

JL: How did the two Israeli communist parties maintain their relationship and claim to Sovietism during the Cold War, when the Soviet Union became, in different and sometimes ambivalent ways, a backer of some of Israel’s adversaries—whether different Palestinian militant factions or certain Arab nationalist groupings?

JB: The Soviet alliance with Syria and Egypt in the 1960s helped propel the split. The faction that became MAKI dissented privately at first, but after the split it openly dissented from Soviet policy. Following the 1967 war, it joined the Israeli national consensus on security issues, and despite maintaining the name for another several years until its collapse, it was no longer a Communist Party in any significant way. RAKAH—today, the Communist Party of Israel—was totally comfortable with the Soviet Union’s regional position. It argued that, theoretically, the Arab Socialist regimes—which is to say, Syria, Egypt, Algeria, Iraq, and South Yemen, after it won independence from Britain—were the leading anti-imperialist forces in the region. You can imagine that that was a pretty unpopular position in Israel. Consequently, RAKAH’s membership, after the 1967 War, became almost entirely Arab. There were a few Jews who remained there, but most of them left either to new political formations that we could characterize as “New Left,” very much influenced by the global New Left, and in particular by new immigrants who had come from North America or South America or France and had participated in student movement politics there.