While the principal victims of Russia’s invasion of Ukraine are of course the Ukrainian people, whose homes are being bombarded by a foreign power, the war is also a catastrophe for the people of Russia. In addition to suffering Western powers’ retaliatory economic sanctions, which have pushed Russia to the brink of default, ordinary Russians are confronting a climate of unprecedented political repression as Vladimir Putin cracks down on what had been the last remaining avenues of dissent and free expression under his authoritarian government. As vast numbers of Russians flee the country, others have been risking their lives and their freedom to protest the war by whatever limited means they can.

For this week’s newsletter, Russian-born researcher Oksana Mironova and her partner, the author Ben Nadler, reached out to some of the Russian activists challenging Putin under these fraught circumstances, and have put together a report that reveals the profound courage it takes to stand against such a regime in the midst of a military quagmire.

P.S. Be sure to check out Alex Kane’s scoop today on how an internal memo at the Anti-Defamation League recommended ending police delegations to Israel. And if you missed last night’s event on criticism as a creative form, you can watch the whole thing here. 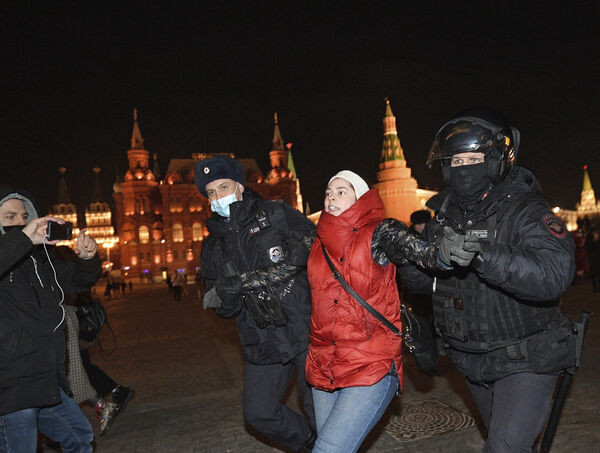 Police detain protesters against the war in Ukraine on Manezhnaya Square in Moscow, March 3rd, 2022.

ON MARCH 5TH, a solitary picketer stood in a public plaza in Ivanovo, a small city northeast of Moscow, with a homemade sign stating: “*** *****”. The eight asterisks stood in for the Russian words for “no war,” alluding to a new wave of censorship that has rendered it a punishable offense to refer to Vladimir Putin’s invasion of Ukraine as a war, and has forced the last vestiges of Russia’s independent media off the air. The previous day, a new law that bans “discrediting the Russian army,” carrying a maximum sentence of three years, had been rushed through the Duma—and when police arrested the protester, it was on those grounds. In the days since, the same law has been used to arrest other demonstrators holding up signs bearing only asterisks, or carrying blank pieces of paper. Since the beginning of the war three weeks ago, the Russian human rights media group OVD-Info reports that at least 14,906 people have been arrested for protesting the invasion.

Despite worsening government repression, there is visible, decentralized resistance to the war across Russia. Demonstrators have staged protests in at least 150 cities. They have scrawled anti-war graffiti in public spaces, staked out solitary pickets (until recently, a safe way for a single individual to express dissent when the government withheld permits for large protests), and taken part in un-permitted marches that have drawn thousands of attendees. “You can’t say this is a protest movement limited to capital cities,” a member of Autonomous Action (AD)—a movement of anarchists and libertarian communists in the former Soviet Union—wrote to us via an encrypted email service, adding that people had taken to the streets “from Kaliningrad to Vladivostok”—in other words, from the furthest western edge of Russia to the furthest eastern border. They wrote: “People came into the street motivated by a shared opposition to the unfolding horror. Most of the [street] protesters don’t have shared political beliefs . . . beyond ‘The war must stop and Putin must leave.’” (The activists we spoke to in Russia all requested anonymity because of the threat of jail time for voicing anti-war views.)

Though the anti-war protests have turned out a multigenerational cross-section of the Russian public, according to the AD member, including elderly survivors of the Nazi blockade of Leningrad and parents with young children, the majority of the protesters are under 30, with significant participation by teens and even preteens. A young organizer with Food Not Bombs—a vegan and anti-war group that began 40 years ago in the Boston area and has sprouted independent chapters throughout Ukraine, Belarus, and Russia—told us that, in the major Russian city where they live, “many adults either don’t care or have been brainwashed by propaganda,” while younger people were more likely—though far from guaranteed—to seek news from non-state-controlled sources before the current crackdown.