Jasbir K. Puar on the Great March of Return and the perils of exceptionalizing the Gaza blockade. 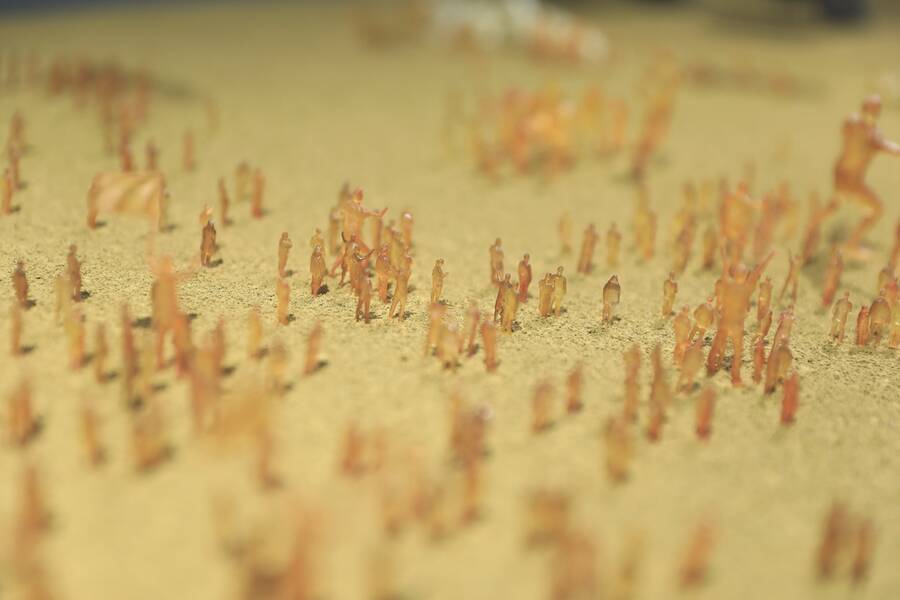 Last November, the first Sharjah Architecture Triennial—which took as its theme “Rights of Future Generations”—opened in the United Arab Emirates. Jasbir K. Puar, Professor of Women’s and Gender Studies at Rutgers University, worked with the architect Francesco Sebregondi to present an installation that pays tribute to the Great March of Return, a series of demonstrations held over the course of nearly two years at the fence encircling the Gaza Strip. This grassroots social movement, in part a response to Gazans’ collapsing living conditions, has been met with extreme force by the Israeli military. To date, over 30,000 civilian demonstrators have been wounded; 7,000 have sustained lower limb injuries at the hands of IDF snipers, usually requiring multiple surgeries and, in many cases, amputation.

In her award-winning books Terrorist Assemblages: Homonationalism in Queer Times (2007) and The Right to Maim: Debility, Capacity, Disability (2017), Puar has written extensively about the evolution of violent new forms of population management in states across the globe. Future Lives of Return, the project she and Sebregondi presented at the Sharjah Triennial, marked Puar’s foray into exhibition-making; she grappled with strategies for conveying the situation in Gaza without lapsing into exploitative modes of representation. I spoke with her about the installation, the shooting of protestors, and the spatial and ecological devastation of Gaza. This interview has been edited for length and clarity.

Sam Holleran: Can you say a bit about your book The Right to Maim?

Jasbir K. Puar: The book asks questions about histories of violence when we shift the focus from killing to injuring and wounding. Biopolitical thought [which studies the relationship between state power and human life] has typically theorized injury as a way of moving bodies towards death. One of the main points of The Right to Maim is to say, actually, debilitation and injury can be unto themselves a separate target. This is the case with the IDF’s use of force in Gaza, where injury is deliberately about making sure that when one is targeting a limb, one is actually not killing a body but debilitating it, making sure that the body stays alive but becomes unable to continue as before: unable to resist, unable to work.

SH: What are the maiming strategies that have been deployed in Gaza and elsewhere?

JKP: In the war on Gaza in 2014, there were some 2,000-plus civilian deaths. That was the main media focus. But there were also at least 10,000 injuries—injuries that became permanent injuries, which is a euphemism for disability. Gazan infrastructure is still dealing with a population of disabled people produced during that time. The IDF’s tactical shift in response to the Great March is striking. This time, the Israeli government didn’t even attempt to modulate this relationship between killing and injuring. It went all-out for injuring. It became a normalization of the spectacle of injuring, and of the sovereign power to maim.

The opening up of the language around maiming seems to me a rethinking of the way certain struggles are happening around the world. In Kashmir, for example, if you think of the Indian military blinding insurgents and you say, “well, at least they weren’t killed,” then it’s not newsworthy. But when you think of blinding insurgents as a deliberate tactic to crush resistance, yet still extract some kind of value from the body, then you understand something different about the kind of violence being enacted. I was so struck recently by the images of this Palestinian photographer who had been shot in the eye, and the way the image was taken up by people in other locations of struggle—Hong Kong, Chile, Bolivia, Kashmir. Protesters were putting an eye patch or a hand over one eye to return the spectacle of maiming back to sovereign powers, saying, “We see what’s happening here.”

SH: Can you tell me more about the project you worked on with Francesco Sebregondi for the Sharjah Architectural Triennial?

JKP: Francesco’s work focuses on architectural containment and the management of logistics as a form of statecraft and control. Francesco and Adrian [Lahoud, Dean of the School of Architecture at the Royal College of Art, London, who curated the Triennial] had come across my work in The Right to Maim and understood that there’s a relationship between containment and maiming. Both are ways of attempting to squash or nullify a kind of vitality.

The refrain about Gaza being uninhabitable by 2020 really guided our project. When people think about the blockade of Gaza, they assume nothing can come in or out. But in actuality, its point is not to stop movement but to control what movement is, when it can happen—to control the idea of movement itself. We wanted to show the blockade as a kind of living, breathing entity that’s constantly being modulated and manipulated; what counts as inhabitable or uninhabitable is constantly being redefined in relation to its political utility. If 85% of the water in Gaza is undrinkable, then bodies are being asked to live the unlivable. It’s a kind of test of what bodies can endure, what they can adapt to.

It was important for us both to contextualize and de-exceptionalize the situation in Gaza. Even though there’s been widespread attention to the injuring of lower limbs during the Great March of Return, it’s not a new practice. We wanted to historicize the ongoing nature of this kind of containment of bodies and connect it to what’s happening in places like Kashmir, or the police practices Black Lives Matter has drawn attention to. We also wanted to highlight the question of resistance. So much of how Gaza is covered turns to the humanitarian crisis there, eclipsing the fact that a national liberation movement is at stake. There is a reserve of political imagination that gets lost in some of the visual materials that come out of humanitarian aid organizations and their deployment of facts and figures. We wanted to draw on that imagination and redirect the conversation back to the liberation movement.

SH: How did your work in The Right to Maim inform the Sharjah exhibition?

JKP: Working on the project was an incredible challenge in terms of how to translate the density of some of that theoretical work into what’s basically a 15 minute experience, how to communicate something of this magnitude and depth without language or within the context of visual language, which I had never worked in before. I had real challenges with some of the visual material. I felt that we could not show maiming itself. We wanted to pull away from the humanitarian-spectacle imagery that was coming through mass media. We worked with a group called ActiveStills, which has photographers in the West Bank and Gaza, and also on the Israeli side, documenting protests and Israeli state violence, home demolitions, the degradation of habitat and of farmland and agriculture. I looked through several thousand images and ultimately pulled 32 of them, to convey the geographical and historical range of maiming, and that this is happening not just in relation to human bodies but also in relation to the environment, infrastructure, architecture: homes, farmland, crops, olive trees.

SH: I know you’re aware of some of the problems that come with visual representation. How did you work through this ambivalence to become an exhibition-maker?

JKP: It was a complicated project. Triennials require an enormity of resources and work. I’m still struggling with how much time, energy, money, resources, exploited labor, and “artwashing,” for lack of a better word, has to happen for a project like this to take place. There are unresolved contradictions for me between all of this and the question of what this project does, if anything, for people in Palestine.

I have to say that with everything we did, I felt slightly to very ambivalent. Even though we made very careful and deliberate decisions about how to represent certain things, my overall orientation, theoretically, is that representation is a trap. I had to let go of that a little and learn about how things can be experienced differently.

I had already been kind of following Palestinian art, and the circulation of art and artists. We wanted to make sure that there was representation from Palestinians in the project, which seems like an obvious priority, but given that the blockade works to limit the ability of Palestinian artists to show their work, we had to be very strategic. I learned quickly that video art was the easiest material form to transport, albeit perhaps the most difficult to create in terms of the availability of technology. All of the pieces we chose were experimental—they index the material conditions of their production without resorting to documentary form. We also worked with a sound artist, Dirar Kalash, who did an incredible soundscape that incorporated sounds from the Great March and testimonials from protestors who’d been maimed in the protests. These are some approaches we took to the task of tracing forms of mobility that defy the blockade as a totalizing enclosure.

SH: “Smart cities” are promoted as tech-optimized urban spaces. They’ve become a buzzword for advocates of data-driven governance, but they’ve also produced a number of real-life experiments with new methods of sensing and control, including tools that surveil people at a granular level, often to prevent petty crimes like littering and jaywalking. You mentioned to me that one of Francesco Sebregondi’s interventions is the idea of Gaza as the epitome of a “smart city” of the future. Could you talk a little bit more about this idea of the blockade as an urban solution?

JKP: Smart cities are not about being technologically advanced. They’re actually about, “What are the forms of control that can manage a population with the least amount of resources and enable the most extraction of value?” We conventionally think of populations being exploited for the productive labor they can perform, but in a place like Gaza it works differently. Israel doesn’t profit from the blockade of Gaza—where about 45% of the population is unemployed—by, say, using the people who live there as a source of cheap labor. Instead, it generates value through other means: weapons testing, collecting humanitarian aid, and so on.

The blockade of Gaza is a blueprint for the future of how populations can be managed. When we don’t see that—when we exceptionalize Gaza as an open-air prison that’s unlike anywhere else in the world—we miss the point that Gaza is actually a kind of model dystopian city. It’s often been said that Gaza would be uninhabitable by 2020—but that rhetoric relies on the illusion that there are universally agreed-upon metrics of livability to begin with. Those don’t actually exist.

Samuel Holleran is an interdisciplinary artist and researcher, examining
public space, visual culture, and memorialization. He has worked as an
art director, researcher, and educator in the field of civically engaged
design with the Center for Urban Pedagogy in New York City, ETH-Zürich,
and Ellery Studio in Berlin. Currently, he is a researcher at the
University of Melbourne, where he is examining public participation in
the re-imagination of urban cemeteries.

Essay
Here Anyone Can Live Free
The Israeli Pavilion at the Venice Biennale raises uncomfortable questions about who should make social practice art.
Samuel Holleran
Essay
Shoahtecture
Are we building Holocaust memory all wrong?
Samuel Holleran
Sign up for our email newsletter, featuring exclusive original content
Short on time?
Sign up for our weekly Monday roundup of everything you missed in Jewish Currents last week.